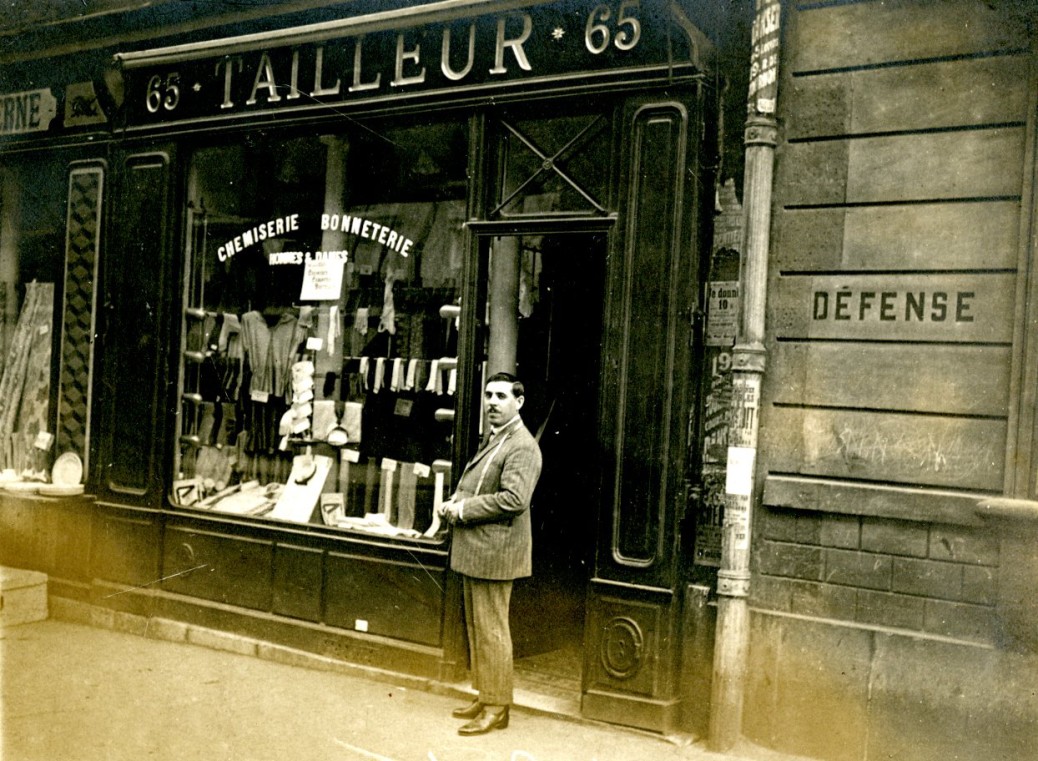 Archives of the History Department of the University of Paris VIII

Noémie JANIN wishes to express her sincere thanks to Michel,

the son of Adèle and Bernard Jeifa, for the information and documentation

he provided and for his permission to write this biography.

Bernard Jeifa, the son of Maurice Jeifa and Blanche Haye, was born on April 23, 1881 at Jotimir, a town then in Russia but today in Ukraine.

Along with his three brothers and three sisters Bernard grew up in a highly religious family, whose education was carried out in Yiddish [1]. Whereas Bernard’s whole family left Russia to settle in the United States, Bernard left in 1905 for France, a very popular destination for Jews with liberal ideas. This emigration is explained by the persecutions against the Jewish population after the failure of the Revolution of 1905. Republican France was greatly admired, notably by Bernard, who sought to avoid being drafted into the army during the Russo-Japanese War of 1905 [2]. He settled in Paris in the Hôtel de Ville neighborhood and learned French by himself. In less than two years he was a cutter certified by the professional trade association, which gave him access as a tailor to prestigious fashion houses. On January 31, 1907 Bernard married a Parisian woman, Adèle Tarder. She was born on April 8, 1887 in the 15th district of Paris. [3].She was French, born of Polish parents. Their religious marriage took place on February 21st at the Temple of les Tournelles[4]. A year later, on February 9, 1908, Adèle and Bernard had a daughter, whom they named Marguerite. They lived at n° 28 rue du Pont Louis-Philippe in a second-floor apartment, where Bernard worked as an independent. Bernard also gave work to several others,  [6].

On Sunday, January 30, 1921 Bernard Jeifa was suspected of being involved with a Communist organization tied to Moscow [7]. A search of his premises came up with nothing. Bernard was not a Communist, but he was in sympathy with the Revolution underway in Czarist Russia. It was just that Bernard had a critical mind and was very proud of being able to vote in France [8]. Bernard may have been suspected of being a Communist because of the increasing number of Communists in France after the First World War.

Between 1923 and 1924 Bernard and Adèle lived in Paris’s 5th district at n° 65 rue Claude-Bernard, which was also Bernard’s workplace. It consisted of a shop with back room, two bedrooms, a living room, kitchen, and an extra utility room. Bernard and Adèle worked together, Bernard as a tailor, Adèle as a merchant. They ran a thriving business.

Bernard and Adèle had their second child Michel on March 11, 1927. Bernard always did his best to provide his children with a good education. Michel had a very happy childhood in a loving family that was well-off despite the economic depression at the time. Bernard always told Michel, “You can lose everything, but they can’t take your education away from you“[9].

It was something Michel would never forget and that he would transmit to his children, a value that the Jeifa family continues to honor today.

In 1937 [1938] the Nazis invaded Austria, and then Czechoslovakia. Bernard kept up his courage, certain that France was strong and would be able to defend itself. He reassured his son that while there might be anti-Semitism in Russia, Poland, all of Eastern Europe, it was impossible in France and not to worry.[10]

In 1940, The Jeifa family began little by little to lose its idealized notion of France. In June the Germans occupied Paris. Anti-Semitic propaganda increased. In October the Jews had to register with the authorities.

“The first thought we had was to show them that we were just like everybody else; we were going to register and we would be proud of it”. [11] (respect for the law ?)

But beginning with this registration their situation deteriorated. In 1941 Jews began to be arrested, especially those in prestigious professions such as lawyers, entrepreneurs, doctors. A sign, “Jewish shop”, was affixed to the shop windows in French and German.

On July 22, 1941 a law was passed dealing with the liquidation of Jewish property and their placement under non-Jewish administrators. It was the start of the “aryanization” of Jewish holdings. This law thus affected Bernard Jeifa’s business. A provisional administrator was named for him.[12] Bernard was to refuse ever to hand over his accounts. As Bernard was a very upright man, he prevented the administrator from carrying out his assignments, and the latter was deemed by his superiors to be incapable of doing his assignments.[13]

On May 28, 1942 a German decree made it compulsory for all Jews over the age of six in the Occupied Zone to wear a yellow star. A great many restrictions accompanied this decree, such as the prohibition for Jewish children to go into public parks, a curfew after 9 :00 p.m., and the obligation to ride only in the last subway car [14].

A new administrator took over on November 19, 1943, one month before Adèle’s arrest. Michel remembers the man as being extremely anti-Semitic and putting great pressure on the family. With Bernard and Adèle absent, the administrator considered their arrest a fine opportunity. A letter mentions that “it would be truly a shame not to take advantage of this circumstance in order to sell the business”.[15]

On December 20, 1943 Bernard had gone out and Michel had just left 15 minutes earlier for school[16], when police officers arrived at n° 65 rue Claude Bernard. They arrested Adèle, who was alone at home. She would be deported to Auschwitz in convoy 66. When Bernard got home he was warned under no circumstances to stay there. Bernard picked up his son at school and from that moment they both hid from the Nazis.

Bernard and Michel took refuge at Marguerite’s house [17] in Sartrouville, where they remained for two days. But it was impossible for them to stay there safely. They hid in different places, with several friends. One of Marguerite’s friends came to their aid. Her name was  Madeleine Jacquet[18], and she worked at the town hall of Sartrouville. In contact with the Résistance, she succeeded in furnishing them with fake I.D. papers. But it was too dangerous for Michel and Bernard to stay together. Separately they had a chance to survive; together there was none. Bernard’s strong accent made it necessary for him to get lost in a big city, which is why he returned to Paris. Madeleine found a room for him, and a job. As for Michel, he was sent to a Protestant family in the Alps under the name of Michel Louis Piarry [19].

Bernard was arrested by the French Police on March 4, 1944 in the roundup at the Chaussée-d’Antin subway station and turned over to the German authorities as a “Jewish individual”. Because of his false papers he was first sent to the Santé Prison. Paradoxically the prison protected him from deportation. Despite the stratagems undertaken by Madeleine to keep him there, he was released on July 22 and sent to n° 44 Quai des Orfèvres, and then interned at Drancy on July 29th with the I.D. number 26086[20]. He was classified as category B, which meant immediate deportation to Auschwitz on July 31, 1944. He left in convoy 77, the last large convoy to carry off men, women, and children from Drancy to Auschwitz. Bernard Jeifa was killed on August 15, 1944 in a gas chamber [21].

[2] According to Michel Jeifa, Bernard’s grandfather had had to stay in the army for 25 years.

[5] Ibid. When a French citizen married a foreigner he lost his French citizenship, which is why Adèle, although born in Paris, was naturalized at the same time as Bernard.

[6] “A Communist organization in contact with Moscow has been discovered in France. Ten arrests” in Le Journal, published on Monday January 31, 1921

[17] Marguerite’s husband was arrested in 1941, interned in a camp in the north of France, and deported to Auschwitz. Marguerite remained alone with her two children.

[18] Madeleine Boisseille is her married name.

[19] Michel Jeifa presumes that Piarry was also the name given to Bernard.

[21] The date of Bernard Jeifa’s death is uncertain. According to the testimony of Michel Jeifa, the date of death of those deported in the first half of the month is estimated to be the 15th, those of the second half the 31st.