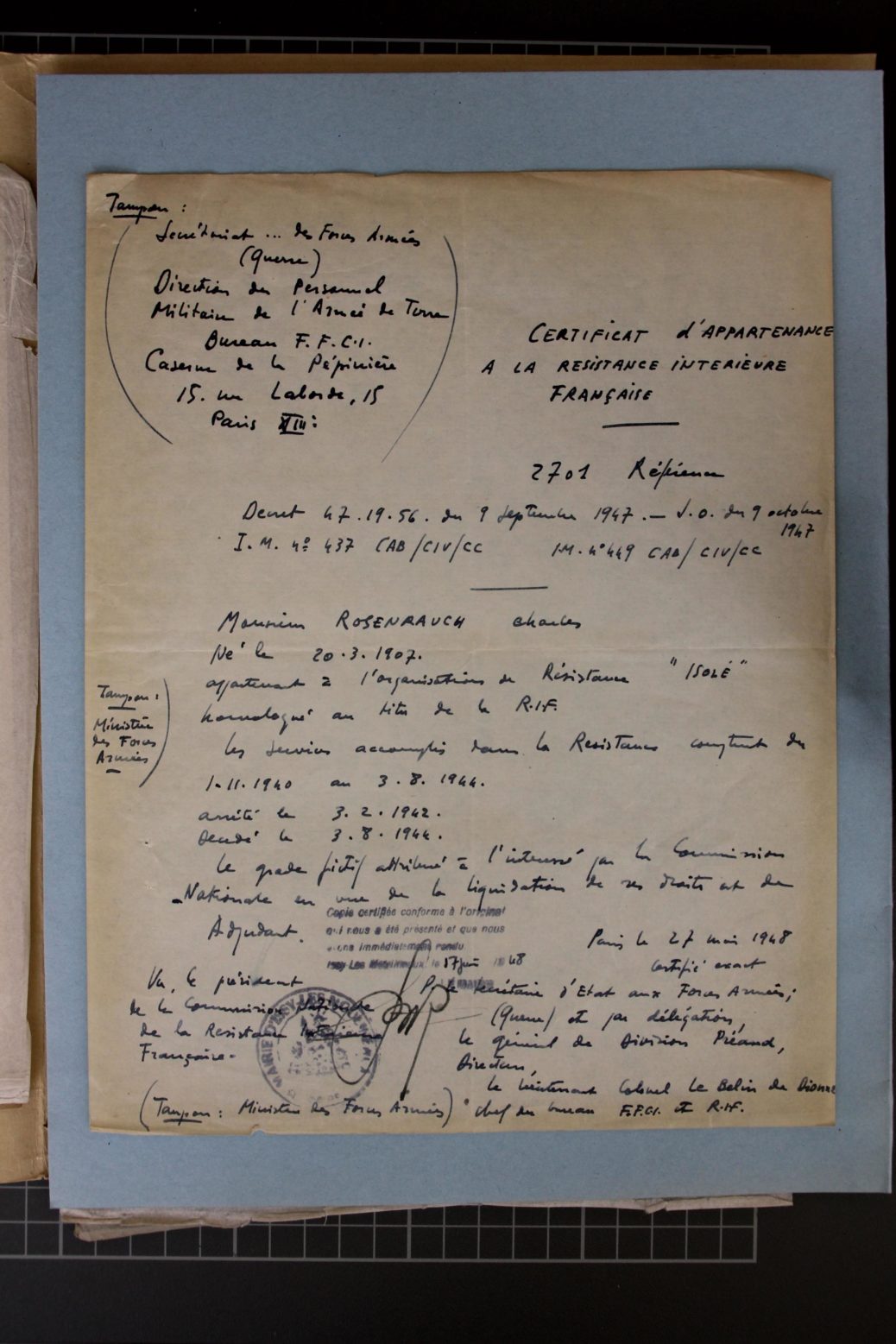 Since we do not have a photograph of Charles Rosenrauch, we are showing, as a tribute to him, a certificate acknowledging him to have been a deportee and member of the Resistance movement.

His young wife had been living at 4, rue Claude Matrat in Issy-les-Moulineaux, in the Seine department of France, but after the wedding they lived together at Charles’ home in Perthes-en-Gâtinais, in the Seine et Marne department. 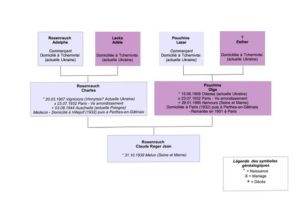 Charles was called up for military service in 1932, but he obtained a dispensation that enabled him to complete his medical training and to write his thesis[2]. 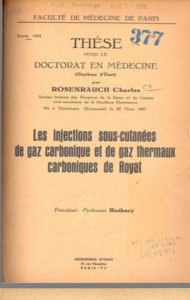 On April 15, 1935, he was assigned to the 12th Military Nursing Section. He was promoted and became a medical lieutenant on July 6, 1938. On September 2, 1939, he joined the Divisional Medical Group and made use of his skills at the front.

In August 1940, however, he was demobilized and returned to civilian life and began practicing medicine in Perthes-en-Gâtinais, according to witness statements by René Truhaut [3], Head of the Chemistry Department at the Cancer Institute of the Paris Faculty of Medicine and Jules Mérec[4] the mayor of Saint-Sauveur-sur-Ecole.

We then have no further “official” news of him until February 3, 1942, when he was arrested for acts of Resistance.

Several witnesses attest to Charles Rosenrauch’s involvement in the Resistance.

First of all, Jules Mérec, former president of the Liberation Committee of the town of Saint-Sauveur sur Ecole, confirmed Dr. Rosenrauch’s involvement in the Resistance and recounted the circumstances of his arrest.

There is also the statement on November 30, 1951, by Paul Lavalette[5], a notary in Perthes-en-Gâtinais and mayor of the town from 1935 to 1944, who testified that he had known Charles Rosenrauch well and that he had rendered “significant services to the Resistance”.

Next, René Méneau[6], a lieutenant-pharmacist who lived in Antibes, testified that Charles Rosenrauch had been part of a British Resistance network and that he had provided valuable information to the la France Combattante (French fighting forces) network “Mithridate”[7].

Finally, René Truhaut[8], an intelligence agent in the C.N.D. Castille network[9] and then the Jonques network[10], whose pseudonym was “Annibal”, testified that Dr. Rosenrauch, known as “Roques”, had been a member of a British intelligence network.

Charles Rosenrauch had asked René Truhaut, his former schoolmate, to keep him in hiding while he was being chased by the Gestapo. He wanted to go to North Africa, but had been arrested while trying to cross into the Free Zone in the southern part of France.

These various witness statements enabled Olga Rosenrauch to have her husband recognized as a deported Resistance fighter.

From these statements we also learn that Dr. Charles Rosenrauch was arrested by the Gestapo on February 3, 1942 [11] at Dijon train station, having been denounced for espionage, just as he was trying to reach the Free Zone along with two English paratroopers.

He was then sent to a prison on the outskirts of Dijon[12] where the Gestapo allowed Olga Rosenrauch to visit her husband. According to the Brinon archives[13], he was arrested for 6 months on February 25, 1942 for “crossing the demarcation line and using a falsified document”.

Next he was secretly transferred to Fresnes prison on April 29, 1942, and then to Drancy internment camp on April 1, 1943, on the instructions of the German authorities. As of April 29, 1943, he was made available to the SS at Maisons Lafitte, where he carried out agricultural work.

The next mention of Charles is on June 23, at Drancy camp[15], where he remained until his departure for Auschwitz on July 31, 1944.

One witness account from an unidentified Convoy 77 deportee[16] which was addressed to Robert Armand Fabius[17] recounts Charles Rosenrauch’s heroic attitude during the journey to Auschwitz.

He was the leader of a cattle car carrying about 60 people, near the front of the train, and was planning to escape. Unfortunately, however, the Gestapo, who had been made aware of the escape plan, stopped the train in the middle of the countryside and the 60 men were severely punished. They were forced to strip naked and were taken to a steel car at the very front of the train.

There they stayed, for 3 days, totally naked and with no food. 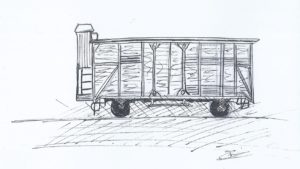 Unfortunately, we have no further information on this escape attempt. However, this unique witness account affords us the opportunity to pay tribute to the courage of Charles Rosenrauch and his companions who wanted to live in dignified conditions. (Note by Serge JACUBERT, editor: see also Jérôme and Régine Skorka’s testimonials, including the filmed recordings about this episode, as mentioned in the references.  Alex Mayer, father of the president of the Convoy 77 association, also mentions it in his book, published by Editions le Manuscrit).

Usually, people went through the selection process as soon as they arrived… 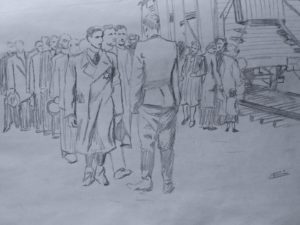 … but in this case, as soon as they arrived, the 60 men were immediately gassed and incinerated.

The Nazis never gave these men a chance.

When the war was over, the battle for recognition began.

After the war, Olga Rosenrauch began the long process of having her husband’s death recorded in the civil register, in order that he be granted the status of Deported Resistance fighter and the distinction of “Died for France”.

The young widow requested that Charles be recognized as non-returned person[18] on June 7, 1948, which the Department of Veterans and Victims of War agreed to on July 4, 1951.

She also sought witness accounts[19] from Resistance fighters, which enabled her to obtain a certificate confirming Charles’ membership of the  Résistance intérieure française (French Internal Resistance network)[20] as an “independent”  from November 1, 1940 to August 3, 1944 from the National Commission for the Homologation of the French Internal Resistance. This was approved by the R.I.F on May 27 1948[21].

Her husband was awarded the notional rank of Adjudant (Warrant Officer) [22].

This document, which was submitted to the Secretariat of the Armed Forces, led to a notification[23] on August 11, 1955, from the Ministry of Veterans and Victims of War. Charles Rosenrauch was granted the status of political deportee.

Charles Rosenrauch, known as “Roques”, was recognized as a deported Resistance fighter. His name can be seen on a decree dated May 23, 1998,[24], which includes the words “Mort en deportation”(Died during deportation).

In the meantime, Olga remarried Pierre Carmes, who was born on July 18, 1923 in Nemours, in the 9th arrondissement of Paris, on October 26, 1951. They moved to 71, avenue du Général Leclerc in Boulogne. She had to fight to obtain the guardianship of her son, Claude Roger Jean Rosenrauch, who was still a minor at the time. In fact, before remarrying, she should have asked for a family council in order to retain the guardianship of her son. Fortunately, however, Judge Paul Vaillant[25], a judge in Melun, agreed to reinstate Olga Carmes as the legal guardian of her child given that she had been unaware of the law.

Charles Rosenrauch’s name is now inscribed on the War Memorial in Perthes-en-Gâtinais, as well as on the wall of names at the Shoah Memorial in Paris[26].

The War Memorial in Perthes-en-Gâtinais 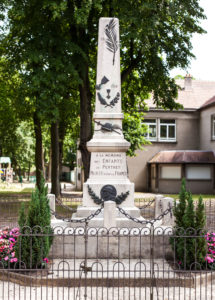 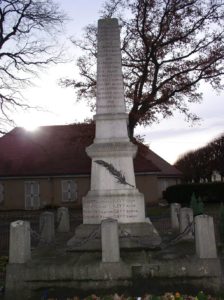 The Wall of Names, which has been recently renovated 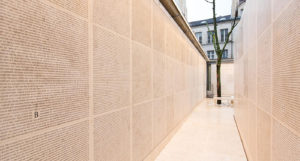 Such recognition is important: it keeps alive the memory of all those lives were destroyed during the war.

Hitler wanted to annihilate the Jewish community, and to destroy all trace of the victims, including their names! The Wall of Names, however, allows the identity of those deported and murdered to be recorded.

Behind all these names there are individuals, histories and broken lives. Thanks to the Convoy 77 project, we have had the opportunity to write a little about the life story of Charles Rosenrauch, a man for whom we have great admiration and respect. A man who chose to resist, right to the end. A man who did not have the chance to see his son grow up or to celebrate the victory against Nazism.

[1] Extract from the Official Journal of the French Republic of May 29, 1932. Naturalization certificate according to the law of August 10, 1927, signed by the President of the Republic, Albert Lebrun, and the Minister of Justice, Paul Reynaud. 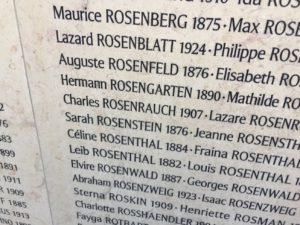 [3] Witness statement of René Truhaut, head of the Chemistry Department at the Cancer Institute of the Faculty of Medicine of Paris, dated March 25, 1947.

[6] Witness statement of Lieutenant René Méneau, dated February 9, 1947, holder of the War Cross with silver star in recognition of his work with in the Resistance movement.

[7] Mithridate was a Franco-British Resistance network, founded as early as 1940 by  Mr. Pierre Herbinger. It brought together more than 1600 agents throughout France, Belgium and Northern Italy.

[8] Witness statement of René Truhaut, head of the Chemistry Department at the Cancer Institute of the Faculty of Medicine of Paris, dated March 25, 1947.

[9] The Confrérie Notre-Dame network, later called CND-Castille, was founded in 1940. It was an intelligence network aligned with Free France by Colonel Rémy, who had been sent by London.

[10] The Jonque network was founded by Maurice Belleux, the head of the Hunter intelligence network, which monitored German aircraft operations.

[12] Witness statement of Olga Rosenrauch to the the Interdepartmental Directorate for Veterans and Victims of War, December 1953.

[13] This is the archive collection of Fernand de Brinon, Secretary of State to the Head of Government of the Ministry Pierre Laval from April 18, 1942 to August 1944. It contains a wealth of documentation about those who were arrested.

[15] Drancy was used as an internment camp and gathering place for French Jews before they were sent to concentration camps and killing centers. Nearly 63,000 people were deported from Drancy.

[17] Anonymous account of a deportee from Convoy 77, addressed to Robert Fabius.

[18] Request to the Department of Veterans Affairs and War Victims, dated June 7, 1948.

[21] The status of volunteer fighter for the Resistance is likely to be granted to any person who belongs to a resistance organization approved by the Minister, on the recommendation of the National Commission of the Résistance intérieure française (French Internal Resistance) (RIF), such approval being published in the Official Journal.

[22] Certificate of membership of the French Internal Resistance, Paris, May 27 1948.

[24] Order of May 23, 1998, concerning the inscription “Mort en deportation” (Died during Deportation) on certificates and judgements declaring death, Légifrance.

[26] The Wall of Names is made up of a set of three stone walls on which are engraved the identities and years of birth of the 76,000 Jews who were deported from France by the Nazis with the collaboration of the Vichy government.