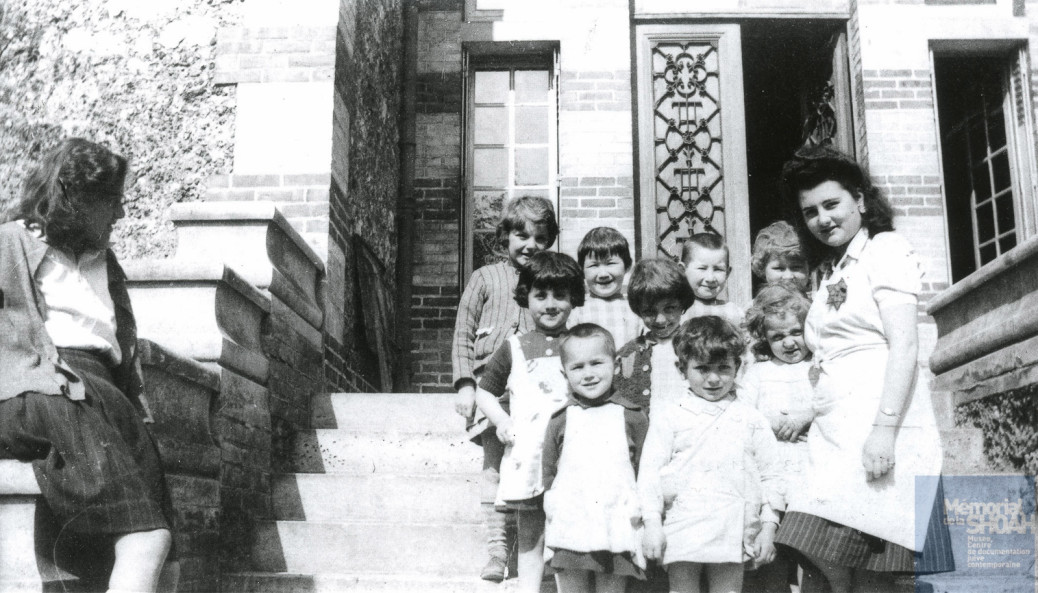 Denise HOLSTEIN was born on February 6, 1927. Her family included her father, Bernard HOLSTEIN, a dentist, born in Kovno (Kaunas), Lithuania, her mother Juliette née Cohen, born in Paris and her brother Jean, born on July 26, 1924.

1938: The family acquired the building at n°79 rue Jeanne-d’Arc in Rouen and moved in there.  The father moved his practice to that address.

1939: Bernard HOLSTEIN was mobilized in September as a lieutenant and assigned to the hospital in Rouen.

1940: After the rout of the French army came flight to the south. Juliette, Denise’s mother, signed up as an ambulance driver and followed her husband to war. They were victims of a bombing that marked them for life.

Denise and her brother Jean fled with their maternal grandmother and great-grandmother by way of Vierzon. The family regrouped in Avignon, where Bernard declined an offer to take over his recently deceased brother’s dental practice.

The following testimony from Denise HOLSTEIN is in French.

In October the family returned to Rouen in the Occupied Zone, and Denise entered the Lycée Corneille.

Bernard HOLSTEIN, under the race laws promulgated by the Vichy regime, was the only Jew authorized to practice dentistry on the right bank of the Seine in Rouen.

1942: On May 6th Bernard HOLSTEIN was rounded up with 76 other men recognized as Jews and interned in the holding camp at Drancy (today in the Seine-St-Denis department).

In June Jean, not yet 18 years old, sought safety with his family in Avignon. Ill, he was sent to Villard-de-Lans (Isère department) in the mountains.

On August 8th Bernard HOLSTEIN and one other victim of the roundup were the only two who came home.

1943: At 9:00 in the evening on January 15th Denise and her parents were arrested at their home in the roundup of all the Jews in Rouen and the department of the Seine-Inférieure (today the Seine-Maritime). They were taken to the Drancy camp the next morning.

On March 5th Denise was sent from Drancy to the Claude Bernard Hospital to be treated for diphtheria and mumps. She received news of her parents through her maternal grandmother, but never saw them again.

March 31st: Denise HOLSTEIN was released from the hospital and placed in Paris centers for Jewish orphans of deported parents (run by the General Union of the Israelites of France (UGIF). She continued school at the Lycée Lamartine in the 9th district.

At the beginning of the summer of 1943 Denise was taken to the UGIF center in Louveciennes (today in the Yvelines department near Versailles); there she pursued her studies and was chosen to monitor a group of children.

April: Denise received a clandestine visit from her maternal grandmother and her friend, Christiane Le Rouxel, who took some photos.

November 1st: Denise returned to Louveciennes  after an operation to remove her appendix.

November 29th: Denise’s parents were deported to Auschwitz II-Birkenau, where they were immediately murdered.

1944: On July 22 the children and their monitors at the Louveciennes center were picked up as part of a larger roundup.
On July 31 they were deported in convoy n°77. Only two of her former dorm mates survived — Samuel Przemisliawski, deported to Bergen-Belsen  as the son of a war prisoner, and Paulette Sklarz, who was in the St-Germain hospital at the moment of the roundup.  Among other survivors of the UGIF Louveciennes Center were Pierre, Josette, and François Nelson, and two other Przemisliawski children, Régine and Maurice, also deported to Bergen-Belsen thanks to their fathers’ status as a war prisoner.

On the night of August 2nd to August 3rd she arrived at Birkenau, where, thanks to the advice of a French member of the Canada kommando (crew of deportees who “assisted” in unloading the new deportees from the freight cars), Denise let go of the children’s hands and was selected for labor. She survived in different work kommandos (units) and was twice in the Revier infirmary.

December 31st: Denise was evacuated by train to the Bergen-Belsen camp (now in the German state of Lower Saxony).

1945: On April 15th she was liberated by British soldiers. Ill with typhus, she was placed in quarantine.

On the 8th of May the war ended in Europe.

At the end of May Denise returned to Paris. There she was reunited at n°53 rue de Châteaudun (9th district) with her maternal grandmother and great-grandmother, her brother Jean, and her cousins.

July and August: a stay in Brighton, a hamlet of Cayeux-sur-Mer (Somme department), with the Sanson family, close friends of her parents. She there saw her friend Isabelle again. She wrote the manuscript put out by the publishing house “Le Manuscrit” under the title ” Le Manuscrit de Cayeux”. The manuscript was written very soon after the war, which makes it rare and highly valuable testimony.

1947: On February 10th she married Jean Samuel at the town hall of the 9th district in Paris and at the Chasseloup-Laubat synagogue in the 15th district. The couple settled in Boulogne-Billancourt.

1949: the birth of daughter Catherine.

1951: Denise took part in the inauguration of Rouen’s new synagogue and the memorial plaque of the deportation.

1953: the birth of daughter Marie-Hélène.

1955: Denise started a career as a sales representative in luxury children’s clothing.

1983: Denise moved to the Alpes Maritimes.

1990: At the invitation of Serge Klarsfeld, Denise took part in the inauguration of a memorial plaque in Louveciennes.

1992: At the Rostagne middle school in Antibes Denise testified for the first time about her deportation. It was for her a revelation, and she was never to cease testifying after that.
Denise prepared and recorded her testimony on audio cassette and contacted local resistance and deportee associations to diffuse her message in the schools.
June: Denise went back to her native city to speak at Barbey-d’Aurevilly middle school, where she had a considerable impact on the students.

1993 and 1994: Denise multiplied her appearances in the Rouen and Nice school systems, before crisscrossing France and even speaking at the French lycée in London.

1995: In January Denise participated in the program “La marche du siècle” on the occasion of the 50th anniversary of the liberation of the camps, while her testimony on deportation came out in the collection “Editions n°1″(Hachette, Paris) under the title ” Je ne vous oublierai jamais, mes enfants d’Auschwitz …” (I shall never forget you, my children of Auschwitz)

In May Denise made a “return trip” to Auschwitz-Birkenau with students of the Barbey-d’Aurevilly middle school. Five more trips were to follow, three of which were filmed by the Centre Départemental de Documentation Pédagogique (CDDP) of the Eure department in 1996, by FR3-Normandie in 1997, and by FR3-Côte-d’Azur in 1999.

1997: The videocassette “Le passage du témoin” (Relaying the baton) was put out by the  CDDP of the Eure department.

2001: On June 27th Denise Holstein was decorated as a knight of the order of the Palmes académiques (a high academic distinction) by the rector of the Academy of Rouen.

2007: On November 21st Denise was invited by France 3 to appear on the show “Droit d’Inventaire”, devoted to the end of the Second World War. 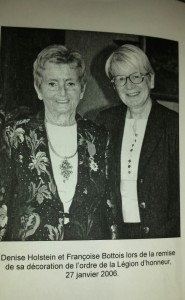 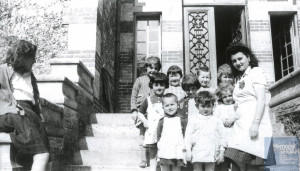