Avram MORDO, my grandfather was born on November 11, 1880 in Smyrna (currently known as Izmir) in the former Ottoman Empire.

In 1908 he became engaged in Smyrna to Luna ESKENAZY, my grandmother, who was also from Smyrna, born on October 19, 1881.

Life for the Jews in Smyrna in general, and for him in particular, was not easy at the beginning of the 20th century, for the Jews were accused of committing ritual crimes and anti-Semitic aggressions occurred frequently.

He was a leather merchant and his financial situation was not brilliant. His cousin Benjacar, who had recently immigrated to France, told him of the warm welcome France reserved for Jews at that time and the availability of work. He thus decided to leave for France to “scout the country” and settled in Lyon. He became an itinerant peddler in the Lyon suburbs, going out every morning by bus or by bicycle with his line of goods – buttons and sundry objects.

A year after his arrival in Lyon he asked his fiancée to come and join him. At the time the trip was a veritable adventure for a young girl. She arrived in Lyon with ten or so other girls coming to France to find a husband or join a fiancé. She was lodged with the Couino family at n° 67 quai Pierre Scize in Lyon’s 5th  district.

They got married on November 22, 1910 in the town hall of Lyon’s 5th district and settled at n° 55 quai Pierre Scize.

My grandfather bought a shop and worked as a shoemaker at 32 rue Montesquieu in the neighborhood of la Guillotière, where many Jewish immigrants from Turkey, Greece, or Eastern Europe lived. They were often cloth merchants or sold ready-to-wear clothing.

In 1912 their first child, Alexandre Emmanuel, my father, was born. They were later to have two daughters, Mathilde in 1914 and Judith in 1916.

In 1920 they took in grandmother Mazeltov MORDO. She had been living with her son in Smyrna, but he had decided to go with his family and his sister Berhora to settle in Argentina, where their descendants still live, leaving the already old grandmother in Europe. She lived until January, 1944 and was buried at the age of 96 in Lyon’s La Mouche cemetery.

They led a pleasant family life surrounded by friends. Everyone worked. They spoke Ladino, stuck together, entertained each other and married their children to families of Turkish origin.

Avram MORDO and some other “Turquinos” founded the Community of Sephardic Israelites of Lyon, who observed the Spanish rite.  The first synagogue was located on the rue du Gourguillon and then moved to the rue des Trois Rois, and finally to the rue Montesquieu. It was this community that initiated the Neve Shalom synagogue, still functioning in Lyon.

In order to be closer to the shop the family moved to n°13 rue Passet in the neighborhood of la Guillotière.

Avram and Luna Mordo requested and were granted French citizenship on October 1, 1927.

During the war my grandfather continued to work in his shoe shop then situated at 106 rue Moncey, in the 3rd district of Lyon. He was a philosopher who would close up shop and go home at any hour when he had brought in what he considered enough money for the day or, on the contrary, might work very late if he had not reached the pre-established sum, a habit that exasperated his wife.

So it was around 11 a.m. on July 18, 1944 that he and his friend, Nissim Meyohass, were about to go out of the shop when a Citroën Traction (front-wheel drive) pulled up in front of the shop, three Gestapo agents got out and burst into the shop to arrest them, according to testimony by the owner of the café across the street. He was then forced to go with them to pick up my grandmother at home. A neighbor lady testified over sixty years later, at the age of 95, describing the extreme violence of my grandmother’s arrest, which she had watched from her window. My nearly blind grandmother was shoved around, struck, and thrown down on the ground before being forced into the van amid screams and yells around 12:30. She had taken the trouble to carry off her jewelry box with her!

Without knowing it she had saved the life of my mother, who had come to visit her. Half an hour before the arrival of the Gestapo she had asked her to leave immediately, without giving any reason. My mother was surprised and a little offended…. Pure luck? Premonition?

My grandparents, Luna and Avram Mordo, along with Nissim Meyohass, were interned in Fort Montluc, where the Jews were detained in Lyon, from the 18th to the 23rd of  July, 1944.

They were deported in convoy 77, which departed from the Bobigny train station on July 31, 1944 — the last convoy — and were selected to be gassed upon their arrival at Auschwitz on August 4, 1944.

What I know about my grandparents boils down to two pages and some yellowed photographs…. My parents spoke very little and very late about them, carrying a deep open wound to their graves.

As granddaughters of victims of the Shoah, my sisters and I were deprived of our grandparents and the history of our ancestors, and, although we bear the burden of their sorrow, we wish to keep and transmit their memory. 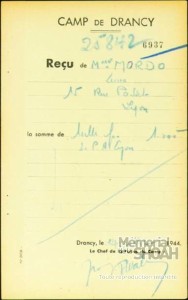 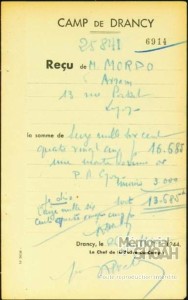 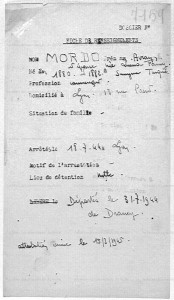 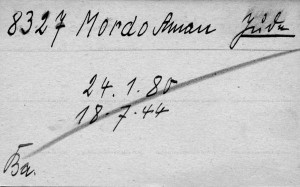