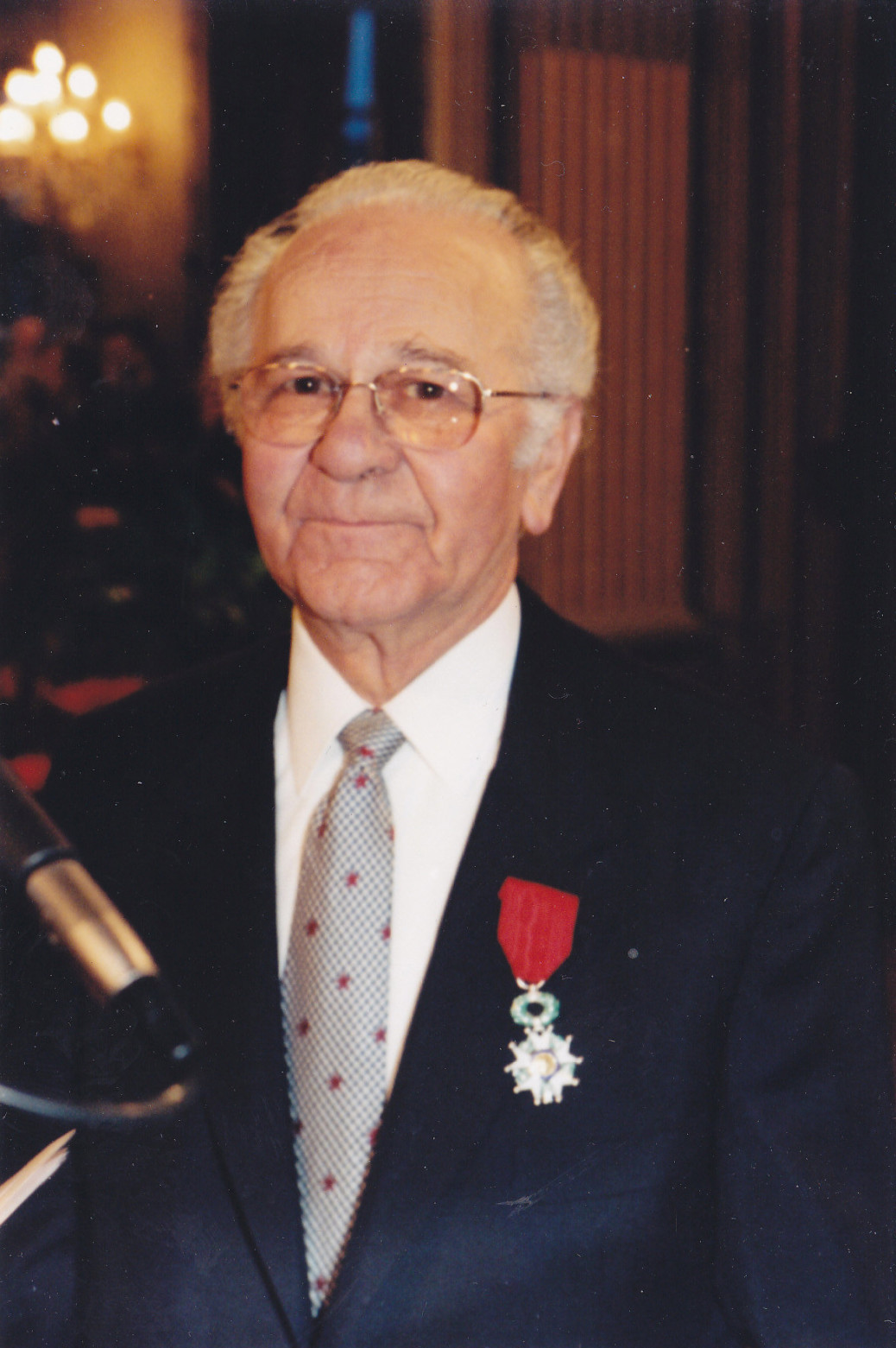 His father, Jacob SKORKA, was a rabbi, and his mother, Slatka née Szejman, was a milliner and sold hats in Słupca. Yerme had a sister Ryvka and two younger brothers, Lajb (Léon) and Zalme (Zali).

In 1929, Jacob managed to immigrate to France and worked in a factory in the city of Nancy, where Slatka’s sister had previously settled and married.

In 1930 Slatka, Ryvka and her two brothers joined Jacob in Nancy. Zalme, whose health was fragile, succumbed to pneumonia. Ryvka took the name Régine, Yerme became Jérôme, and Lajb called himself Léon.

1938: Jacob and his family were declared stateless by the Polish government. Their requests for French citizenship were left pending.

1940: The Skorkas fled before the advance of the German army all the way to Libourne near Bordeaux. Jacob and Jérôme were farm laborers, Slatka and Régine cooked for them. This interlude in the countryside did not last long, no doubt due to the inefficiency of the “farm laborers”. The family moved to Bordeaux, and they all found odd jobs. Régine returned to work on the markets.
In September, 1940 she went back to Nancy to reopen her market stall, while Vichy issued its first anti-Jewish Statute. Two months later, in December, the whole Skorka family, except Régine, was interned in the La Lande camp at Monts, near Tours.
1941: Pierre Marie, Edouard Vigneron’s deputy in the aliens bureau of the Nancy police department, provided Régine with a real-fake I.D. card in the name of Hiebel, born in Metz. She used this card to make regular visits to her family at the camp.
October, 1941: Jérôme escaped to Dijon to avoid being trapped as La Lande was converted from an open to a closed camp. Régine went down to get him, finding him hidden by Resistance railway workers (as it had become more difficult to cross into the Red Zone restricted for future German colonization) on a train in the rubbish can of the dining car. Jérôme had no papers, but luck helped him to get back to Nancy with Régine (a story that is told in Jérôme’s book).

July, 1942: The officers of the aliens bureau warned Nancy’s Jews of an imminent roundup, thus saving around 3000 people. At the end of the month Régine and her aunt’s family fled to the Free Zone, first aided but subsequently undermined by a crooked smuggler. Jérôme also left for the Free Zone with a real-fake I.D. card made out for Hubert Hiebel, born in Metz , a madcap episode in which he crossed the demarcation line in a locomotive tender with the aid of resistance activists among the railway workers.

August, 1942: Régine and Jérôme learned that their parents had been separated from their young son Léon, who had left for Angers. He was not heard from again. Their parents were deported in convoy 31 on September 11th; their brother had been in convoy 8 on July 20th.
Régine found a job in a shoe store; Jérôme was hired by Citroën as a lathe and milling machine operator.

1943: In June Jérôme (under his false name Hubert Hiebel) was ordered to a Youth Workers camp. He complied and departed for Rumilly-en-Savoie. In August, along with a good number of the other adolescents in the camp, he was to harvest gapes near Narbonne.  Scarcely back at the youth camp, he picked up the rumor that he would have to leave for the Todt camp in Normandy, and Jérôme decided to escape again and to go underground with the Resistance (in the combat groups of the Union of Jews for Resistance and Mutual Aid). At the end of 1943 and the beginning of 1944 Jérôme took part in numerous acts of resistance and succeeded in foiling several ambushes.

June 6, 1944: the allied landing
June 22nd: Jérôme was arrested at home on the rue de l’Annonciade, by the militia, commanded by a member of the Gestapo. Régine fell into the trap and was arrested as well. They were interned in the camp of Montluc and interrogated by a man whose name they were to learn only much later: Klaus Barbie. Identified as Jews, they were sent to the holding pen at Drancy instead of being shot.
July 31st – August 2nd: They were deported in convoy 77 from Drancy to Auschwitz.
A day in August in Auschwitz: Jérôme came across Michel Gelber, a friend from Nancy, interned in the La Lande camp and deported in 1942 at the same time as Léon, the young brother of Jérôme and Régine. Michel told him how one dies and “goes up through the chimney”, that such was the fate of his wife and two children, and also of Léon, who had only lasted six months, of his father Jacob, who had caught typhus after three months and been left without glasses despite his extreme myopia.
October 7th: Planes wheeled around over the camp with the tortured bodies of the members of the sonderkommando (auxiliary deportee unit) who had blown up some cremation ovens.
October 28-29: He was transferred with some but not all of the others to the Stutthof camp near Dantzig (Gdansk today) on the Baltic. In that camp Jérôme came down with typhus, but got well and survived.
Mid-December: He was transferred to the camp at Vaihingen- am-Enz, near Stuttgart. Although one of his feet was frostbitten during the transfer, he was nevertheless put to work removing the ice from the airfields.

End of January, 1945: He was trucked from Vaihingen to the Ohrdruf camp southwest of Weimar. There he was designated an undertaker, whose task was to remove the corpses.
February 12th: Jérôme was sent to the Revier (infirmary) on account of his frostbitten foot. The Russian doctor, upon learning that Jérôme was French, operated, lancing the infection that had been caused by the frostbite, saving him from mutilation and death. He lanced three more times in the following days.
April 2nd: The Ohrdruf camp was evacuated, on foot for those who were fit, by truck for those who, like Jérôme, could not walk to the camp at Erfurt. The sick and dying were jammed into the kitchen barracks, which was blown up.
April 3rd: Transfer by truck to Buchenwald.
April 8th: Among a thousand other starving and exhausted prisoners, Jérôme, suffering from an intense pain like a piston banging in the heel of his sliced-open foot, had to trudge, while soldiers finished off those unable to keep up.
April 11th: After three days of walking they arrived in Iéna.
April 12th: Jérôme and a fellow he had befriended named Martin escaped from the column, the guards having become fewer, but also more violent.
Friday, April 13, 1945: After two more miracles (some charitable Germans who gave them something to eat, and a young SS who aimed at them but couldn’t kill them), they linked up with the Americans in the area of Crossen.

May 22nd: Return to Nancy, unrecognizable because of a facial edema contracted at Crossen after swallowing his first food.
Starting in 1979 Jérôme Skorka, having gallicized his name to Scorin, spoke in schools that invited him, talking about his life between 1939 and 1945, answering the students’ questions, and accompanying them and their teachers on trips to the places of horror, but also of memory.

For his pedagogical action he was given the decoration he most admired, the Palmes Académiques, on September 28, 2008. 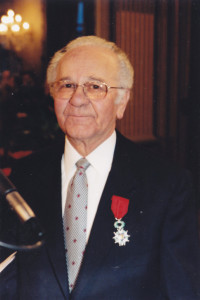