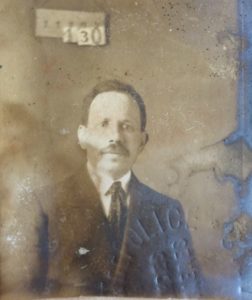 Photograph of Abraham Delberg, dating from 1917, from the Seine Police headquarters’ archives.

This biography was researched and written by a group of three 9th grade students from the French International High School in Vilnius, Lithuania, where Abraham Delberg appears to have been born.

The most extensive documentary records (naturalization file, “foreign” and “aryanization” dossiers from the Seine Police Prefecture and “disappearance” file) were provided by the Convoy 77 project organizers. At the same time, during the three months of Covid 19 lockdown, the students’ history teacher collected together those documents available on the Internet (civil records, census data etc.). Then, at the end of the lockdown, over a period of several weeks, the group of students worked on the documents thus collected and drafted the biography. They added some historical background information and wrote an email to Abraham Delberg’s grandson, who, at the time of writing, had not yet replied.

The organizers of the Convoy 77 project kindly provided us with a wealth of documents, including:

For our part, we found on the Internet:

We also searched the Jewish birth registers kept in the Lithuanian Historical Archives.

A tailor from faraway Lithuania

According to French documents, Abraham Delberg was born on January 15, 1878 in Vilnius, which was at that time in the Russian Empire, but we were unable to find his birth certificate in the city’ s Jewish registers which, supposedly, have all been kept. Perhaps Abraham was born in the Vilnius area, rather than in the city of Vilnius. According to 1920s police records, he had no documents from his country of origin, Czarist Russia, to prove his identity. Abraham Delberg arrived in France during the Belle Epoque, when migration was not as strictly controlled as it is today. It was common practice to cross borders “undocumented” before the Great War brought back stricter controls, and an identity card became compulsory for foreigners in France in 1917.

Generally speaking, Lithuania and its neighboring territories such as Belarus and Ukraine were home to a considerable Jewish population, Vilnius was known as “North Jerusalem”, and the Jews of the area called themselves “Litvaks“. They made up a significant proportion of the urban population, especially among craftsmen and merchants. Abraham’s family fell into this category: his father was called Joseph and his mother Kivia (née Blistein), and his brothers, Sinter (born around 1872), Léon (born around 1886) and Frolich (born around 1891), all became tailors as did Abraham, and probably their father before them. Tailoring was a family tradition it seems.

Although Abraham may not have actually been born in Vilnius, an Abram Delberg is included in the 1897-1898 Tsarist government lists. The names of his father (Iosel/Joseph), mother (Tsivia/Kivia) and brother (Sender/Sinter) correspond with those in the French documents, but his date of birth is given as April 2, 1877, which is not the same. If it is indeed the same Abram, then at that time he was doing his military service in the village of Chechelnik, in Ukraine. Later, in his naturalization application, Abraham stated that he had carried out his military service in Russia, so it appears that he did indeed complete it. In the Russian Empire, military service had become compulsory for all men, with several exceptions, in 1877. It lasted for up to six years, but for men who had attended primary school, the time could be reduced.

This military service often tore young Jews away from their home community and its traditions, even though they were allowed to continue to practice their religion. In fact, Abraham Delberg never really returned to his community when he finished his military service, since it was shortly afterwards, in 1903, that he left for France. Perhaps his brother followed suit, since he too lived in France between the wars.

Settling in Paris: starting a family and a business

Abraham settled in the 18th district of Paris, firstly on rue Labat, then at 14, rue Eugène Sue, then at 6, rue Bachelet and then at 5 or 6, rue Versigny. Located in the north of Paris, this was a mainly working-class area, where migrants found it easier to establish themselves, since rental costs were lower.

On March 25, 1924, Abraham officially married Sara Wiener who was born in Volta, Russia, on May 24, 1890. However, a note made by the police headquarters in 1926 indicates that they had previously been married in a “Jewish”, religious wedding ceremony in the Russian Empire (where civil marriage did not exist during the Czarist regime). Their marriage in 1924 was therefore considered to be a “remarriage”, so that their union would be officially recognized in France. In addition, their first child, Cécile, had been born much earlier, on May 4, 1909, when the couple lived at 52, rue Ordener, also in the 18th district, and, according to her birth certificate, the parents were “married” at the time.

Also, in 1905, they were already registered together as a foreign couple. They therefore appear to have married early, between 1903 and 1905, when Sara was only between thirteen and fifteen years old. This may seem shocking today, but it was not unusual in Czarist Russia at the time, where people got married earlier than in Western Europe. A young girl was considered to be of marriageable age in her adolescence, between 13 and 16 years of age, especially in Jewish communities.

Sara and Abraham’s second child, Henri, was born on December 16, 1911. The Delbergs were then living at 14, rue Ferdinand Flocon, also in the 18th district, which was still their address at the time of their arrest. Their third child, Georges was born on January 12, 1915, their fourth, Simone, on October 13, 1920, their fifth, Roger, on July 15, 1925, and their last child, Jacques, on August 31, 1930. On June 13, 1929, Cécile got married to a certain Moïse Anchenfarb, at which time she left the family home. As for her brothers, we know from the census records that Henri was working in a jewelry store in 1931, and then in a grocery store in 1936, while Georges was a furrier. Their sister, Simone, became a shorthand typist.

In 1917, the Delbergs complied with the new law requiring identity cards for foreigners. Their first four children were able to become French by declaration in 1925, by virtue of the fact that they had been born in France. Then, in 1927, Sara and Abraham Delberg took advantage of the law of the same year, which made it less important to have French blood, and the minimum period of residence in France before people could apply to be naturalized as French was reduced from ten to three years. The number of naturalizations increased sharply as a result of this change: more than 320,000 adults became French between 1927 and 1940, including the Delbergs.

At the time of their naturalization, the Delbergs were a relatively prosperous family, even though they lived in a rented home. Abraham had a sewing workshop at 10 rue Hermel, in the 18th district, which he had rented since 1923 and which earned him about 500 francs a week. He also had savings of 200,000 francs (one franc in 1927 would be worth about 50 cents today). The workshop included a retail store and two other rooms, with two sewing machines, and employed four workers. It supplied clothing to the well-known French department store, Printemps. The Delbergs also bought a four-story apartment building at 44, rue Sauffroy, in the 17th district, which housed seven tenants, for the sum of 120,000 francs.

The Delberg family during the Occupation: the confiscation of their property and the father’s deportation

In 1939, when war broke out, the Delbergs’ sons Henri and Georges were called up and served in the war. Georges was awarded a certificate of good conduct and Henri, who was a nurse, the Croix de Guerre (the War Cross) for “holding his ground to the end” while the French army, faced with the German invasion, was involved in a skirmish. Their courage, however, did not spare the family from persecution during the Occupation.

In 1940, when the Vichy regime in France passed the first anti-Jewish decrees and Paris was occupied by the Germans, the Delbergs complied, according to Police reports, with all of the regulations pertaining to Jews, which included having a special stamp on their identity cards, a yellow “Jewish Company” sign on the front of the workshop/store, and taking part in a compulsory census in 1941, followed by the beginning of the “Aryanization” of Jewish companies, which was carried out provisional administrators with a view to seizing them. This was what happened to the Delbergs‘ sewing workshop in 1941. However, since Abraham undertook to no longer use it as a retail store, but only as a workshop supplying the Printemps department stores, he was allowed to keep his workshop, and the provisional administrator was relieved of his duties on March 2, 1942. Nevertheless, Abraham Delberg was only allowed one sewing machine: the second one was confiscated and sold off in 1943. By 1944, the workshop only had two employees, as opposed to four before the war. Furthermore, on June 2, 1942, the Delbergs‘ apartment building was placed in the care of a provisional administrator, before being “Aryanized” (acquired by a non-Jewish owner) on October 25, 1943. Lastly, in October 1943, the Naturalization Revision Commission took an interest in the Delbergs: following the law of July 22, 1940, the Vichy administration had revoked the French nationality of many people who had been naturalized under the 1927 law, which at the time had been widely opposed in extreme right-wing circles.

The Delbergs’ case was still under investigation when, on 18 July 1944, Abraham was arrested at his workshop by officers of the Militia and the Gestapo. The arrest came out of the blue, and Abraham did not have time to gather any belongings to take with him. When he arrived in Drancy on July 19, the search logbook stated that Abraham had only 280 francs on him (one franc in 1944 would be worth about 20 cents today). However, the other members of the family were not arrested, even though they were not in hiding, with the possible exception of the son Georges, whose address in 1944 is unknown. Might the fact that the sons were born in France, so were not under investigation for possible “denaturalization” and had fought in 1939-1940 play a role in this? Or might the militiamen have been satisfied with raiding the “Jewish workshop” and only arresting the owner?

Convoy 77, with Abraham on board, left Bobigny station on July 31,1944, and arrived in Auschwitz on August 3. The Official Journal of the French Republic dated March 10, 1988 gives August 5, 1944 as the date of his death at Auschwitz. However, we cannot be certain that this is correct because, in the absence of any documentation to prove otherwise, the French authorities usually gave the date of death as the 5th day after the train’s departure.  In fact, of the 1310 deportees on Convoy 77, 836 were sent to the gas chambers as soon as they arrived, on August 3. This is probably what happened to Abraham Delberg, who, at the age of 66, was an elderly man.

A group of three 9th grade students from the French International High School in Vilnius, Lithuania, under the guidance of their history teacher, Yvan Leclère. 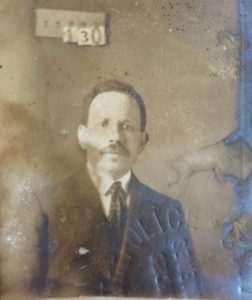