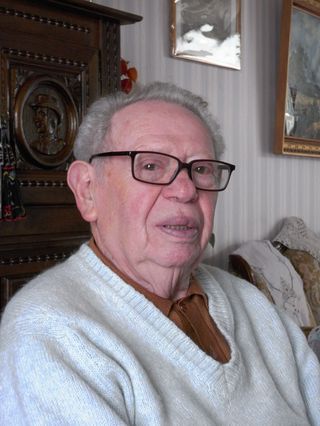 Photograph opposite taken at his home in October 2011.

Abraham Fridman was born on Sunday, October 23, 1927, at the Hospital de la Pitié, to Anne Rose Fajgenman and Isaac Fridman, born in Poland.
His birth is registered in the town hall of the 10th “arrondissement” of Paris.  He was the second child in the family: his sister, Suzanne, was born on June 25, 1936.
His father was a humble worker: the family had to settle for two rooms and a kitchen on the third floor of a building in the 5th arrondissement, at 17 rue Pascal.

Abraham Fridman lived in Paris during the war.

He was deported to Auschwitz-Birkenau, escaped selection despite his young age, and worked in a commando unit attached to Auschwitz.  He was then moved to the Stutthof camp near the Baltic Sea. His work involved digging up vegetables buried in sand to preserve them. He was moved again to the Buchenwald camp in Thuringia. He was one of the “liberated” on April 11, 1945.

When he retired, he divided his time between Montsûrs, in Mayenne, and Juan les Pins.  He regularly took part in trips to Auschwitz with students and increased his engagements in primary schools, colleges and lycées (high-schools), particularly in the west of France. He recounted in detail the story of life in the camps and how doctors in Buchenwald had saved him by simulating an appendicitis operation.

He published his testimony in a self-published book: Je n’ai rien oublié rien (I have forgotten nothing), Editions les Quatre Roses.

He passed away on August 14, 2014 and is now at rest in the cemetery at Montsûrs, in Mayenne. The amphitheatre of the Lycée Raoul Vadepied d’Evron, in Mayenne, is now named after him.