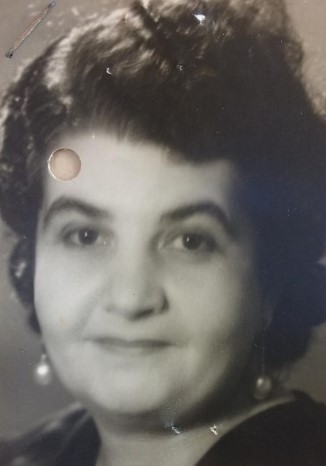 “The author of this biography feels that it is not sufficiently detailed and would like to invite anyone interested to continue the project”.

The photo of Ms. Laskar is from the Victims of Contemporary Conflicts department of the historical research bureau of the Defense Ministry in Caen, France

That of her son Albert, at the bottom of the page, comes from the military sources cited below.

Augustine Benamou was born in Algiers on March 23, 1895. Her mother, Fahraï Kamoune, was a cigar maker[1]. Her father, Braham Benamou, was a shoemaker. She also had a younger sister named Marie-Louise. The family left Algeria for Paris, France. At the age of 16, Augustine married Messaoud Laskar, born in Oran on May 10, 1877. He was a shoemaker by profession and did his military service at the age of 21[2]. He then became a reservist and lived in Ostend in Belgium. In 1912, when he was living at 22, rue François Miron in Paris, he met Augustine. At the age of 34, he married her[3]. She was still a minor, was working as a housekeeper, and lived at 20 rue de l’Hôtel de Ville.

The couple settled a few months later at 1 rue du Figuier and gave birth to their first child, Elie, who was born on November 3, 1912[4]. As a reservist, Messaoud was mobilized on August 1, 1914 and was part of in several artillery regiments. On 4 November 1918, Augustine gave birth to the couple’s second son, Albert[5], who was born at 15, rue Santerre in the 12th district of Paris. In the meantime, the family had moved from rue du Figuier to 36, rue du Roi de Sicile. Messaoud was 40 years old, while Augustine was 23.

On May 13, 1939, Elie became a merchant, and married Estelle Amar, 21, at the Town Hall of the 4th district of Paris. She was a saleswoman, the daughter of Adolphe, an office worker, and Marie, a tradeswoman. All four lived at 11, rue Malher. As for Messaoud and Augustine, by this time they were living with Albert, at 11, rue du Marché aux Herbes in Brussels, Belgium.

At the age of 19, Albert did his military service in Valenciennes and was mobilized on August 27, 1939 as a brigadier. He was discharged on July 31, 1940 in Nîmes. After staying in Marseille, Albert returned to Belgium as a sales representative. In July 1942, he crossed into the Free Zone and went to Marseilles. Following the Allied landings in North Africa on November 8, 1942 and the invasion of the Free Zone by the Germans and Italians, Albert joined the Free French Forces, left Marseille on November 11, and attempted to cross the Spanish border at Perpignan on November 19. He was arrested by the gendarmerie and sentenced to one month in the Perpignan prison for clandestine border crossing. Released on December 20, he once again attempted to cross the border into Andorra on February 10, 1943, but was arrested again; this time in Urgell, in Catalonia, Spain. Transferred to the prison in Lérida, he was released on August 9, 1943 thanks to the Belgian Embassy in Madrid. He remained in Madrid until September 9, 1943 and crossed to Portugal on September 12 with a Belgian passport. He returned to Morocco on October 28th and signed up for voluntary enlistment for the duration of the war. He was assigned to the 66th North African Artillery Regiment of the 2nd Armored Division on December 1, 1943. On May 20, 1944, he left for Great Britain and arrived in Greenock on May 31. He landed back in Normandy on August 2nd, 1944. He took part, together with his unit, in the French and German campaigns, then was demobilized and discharged from active Army service on August 23, 1945[6].

Augustine returned to Paris during the war, staying at 11 rue Mahler, the address of her eldest son, Elie. She was arrested by the French police on June 30, 1944 and interned in the Drancy camp. She remained there until July 31, when convoy n°77 departed for Auschwitz. Before leaving the camp, she managed to send a message to her younger sister Marie-Louise, in which she said that the destination of the was somewhere near Prague, in Czechoslovakia.

The convoy arrived in Auschwitz on August 3, 1944. When she arrived and went through the selection process, Augustine was not selected for work.

[1] A worker who produced handmade cigars.

Fiona GERVAIS, Master’s student of Archives at the University of Paris VIII under the supervision of Ms. Matard Bonucci.