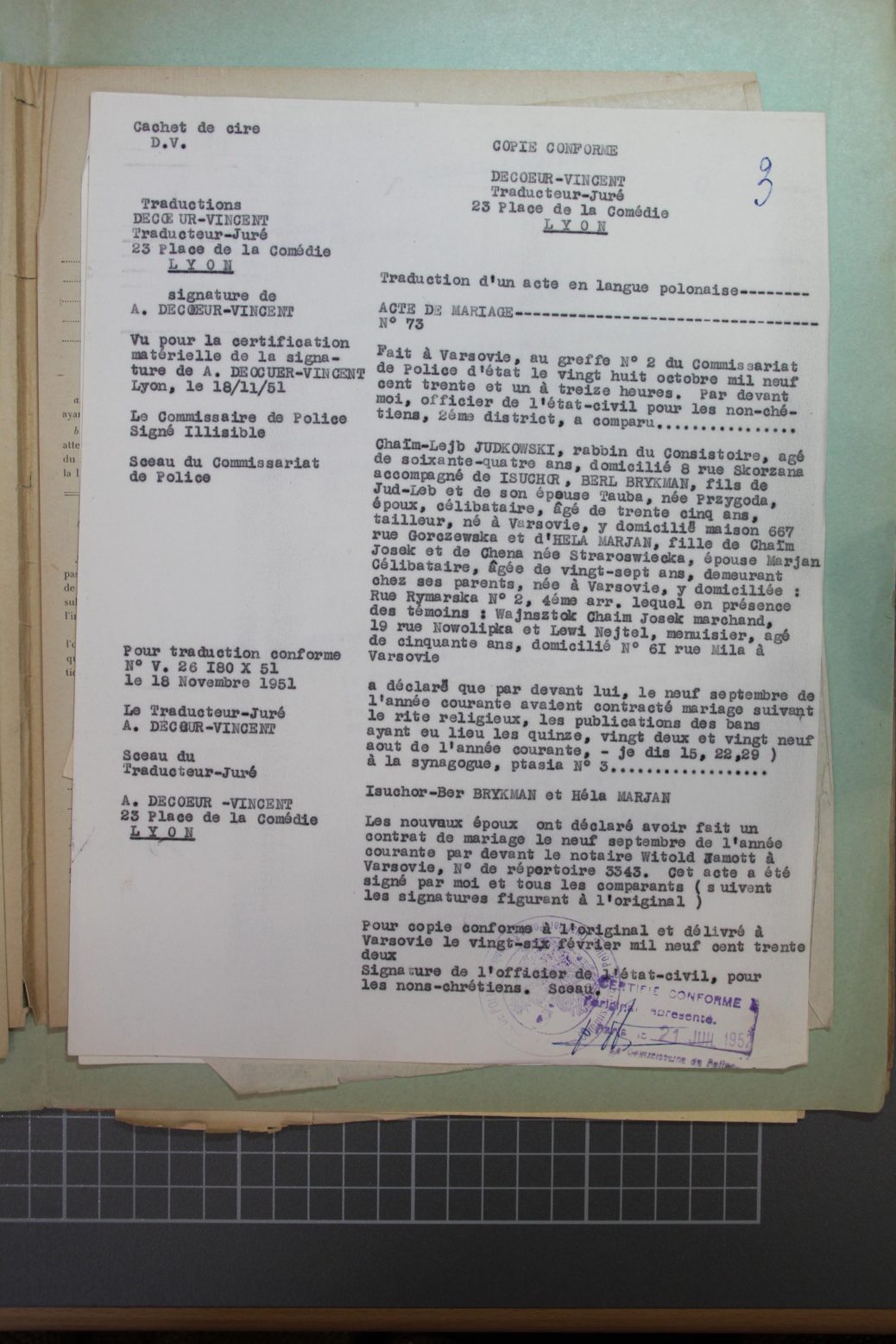 The image on the left is a French translation of the marriage certificate of Berel and Hela.  We do not have a photograph of them, unfortunately.

Berel Brykman was born in Warsaw on December 2, 1896. His first names were registered as Isuchor Ber. His parents were Juda-Lejba Brykman and Tauba Frandla, whose maiden name was Przygoda. He had two older brothers, Josek and Mosek Brykman. Berel worked as a tailor. In 1932, when the Polish police accused him of falsifying documents, he declared that he owned a workshop.

On September 9, ‘ 1931 he married Hela Marjan, daughter of Chaim Josek Marjan and Chena Marjan, née Staroświecka. In June 1932, his first daughter Henriette was born. In the same year the Brykman family was living in Warsaw at 6, Górczewska (apartment no. 11), and later moved to an apartment at 1, Przebieg Street (apartment no. 90).

According to a document in the Polish police archives, the Brykmans moved to Paris in January 1934. In the French police records, we find their address: 18, rue Pierre-Levée. It also states that Berel had three children: Henriette, born on June 2, 1932, Thérèse, born on November 2, 1937, and Georges, born on April 27, 1940.

Berel was arrested by the Gestapo on August 21, 1940 on the basis that he was a Jew. However, records show that he was a Uruguayan citizen (having been naturalized), which is quite surprising given that there is nothing to suggest that he had ever actually been to Uruguay in his life. Berel was released on June 9, 1942, presumably thanks to his Uruguayan nationality. In January 1943 he was arrested again and sent to the Compiegne camp, then he was interned in Drancy and deported to Auschwitz on July 31, 1944 on Convoy 77. Some documents state that he died on July 31, 1944, while others give the date of death as August 5, 1944 in Auschwitz

After Berel and his wife were deported, Léopold Baver took care of the Brykman children. They lived with him at 6, rue Pasteur, in Paris.

In a letter dated 1946, a Mrs. Genevelle, who was described as the children’s guardian, informed the police that the orphans did not know the dates of birth of their parents and were unable to help the police in their research into them.

On May 23, 1949, Thérèse was mentioned in the records of the Commission Centrale Pour l’Enfance (Central Commission for Childhood) as having won the first prize in a regional essay contest. She was registered as a student at the High school for girls in Aix-les-Bains, in the Rhone-Alpes region of France. However, other than this snippet of information, there is no trace of Therese in the records.

On July 12, 1962, Henriette is mentioned in the files of the French police, who were still researching the deportees and people who went missing during the war.

This biography was written during the winter semester 2018/2019 at the French High School in Warsaw by a 12th grade student, Mercedes Agomar de Sagarra Żbikowska.