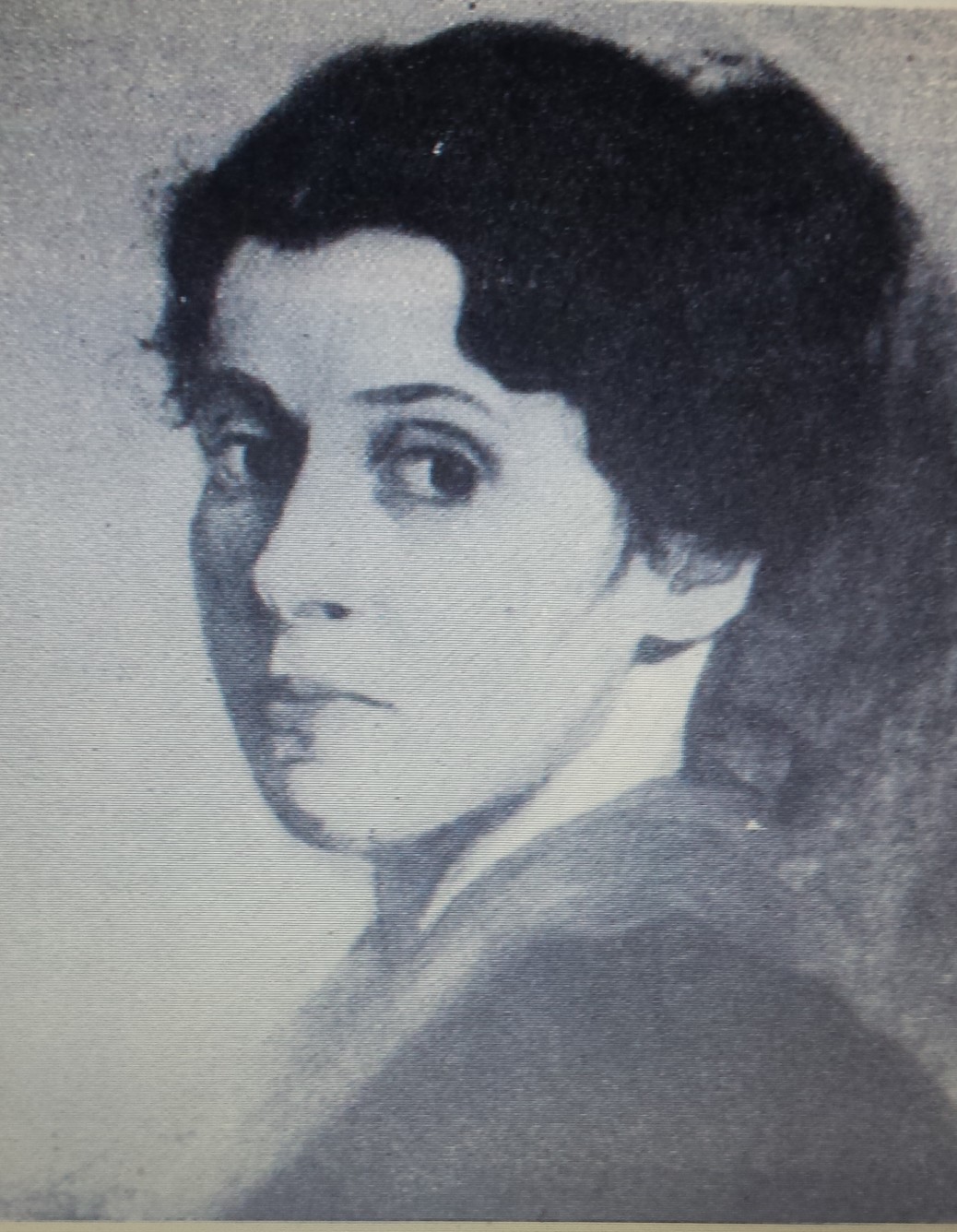 Biography researched and written by a class of German students under the supervision of its teacher (cf. below).

It is difficult to reconstitute the life of Sophie Blum, née Lazarus, to determine who she was. According to what we have been able to find out so far, she was born on July 15, 1867 in Stuttgart.  Her father, Adolf Lazarus, was born in Remseck-am-Neckar (Hochberg) north of Stuttgart in 1836. He was a furniture maker in Frankfurt-am-Main, and he married Johanna Astuc, Sophie’s mother, in 1865.

Sophie had four brothers and sisters: an older sister named Friederike, two younger brothers, Siegfried and Franz, and a little sister called Kornelie Sophie, who was 12 years younger. In 1885 Sophie’s brother Siegfried immigrated to the United States at the age of 17. He disappeared and was declared dead in 1921.
According to the Book of Memory of the Federal German Archives (which can be consulted at Yad Vashem), Sophie was a painter. But we have not yet been able to find out where Sophie and her family lived in Stuttgart. Neither do we know when she married and became Sophie Blum, nor whether she had any children. The date and circumstances of Sophie’s departure from Germany for France are also unknown; nor is it known whether she went alone or with her husband.  We have no photo of her.

No member of the Lazarus family applied to the German state after 1949 for an indemnity as a victim of Nazi persecution. In the Bade-Württemberg archives there is apparently no trace of Sophie; the Family Register of the municipal archives is all we have.

But we continue to search. The main discovery took place in France, at the Museum of Art and History of Judaism, where a book written in Yiddish contains a chapter on her, with extracts from letters she wrote to a friend. It is appended to this document (cf. below).

SOPHIE BLUM-LAZARUS (1867-1944) Extract reproduced from a book in Yiddish, “Undzere Farpainikte kinstler”, H. Fenster, Nos Artistes martyrs, Paris, 1951, extract translated by Tina Urman and reproduced with her kind permission. Ida Richter, a student at the Institute for Political Studies (IEP) in Paris, translated this document into German. It was furnished to the high school class that is working on this biography.

An elderly Jewish artist who portrayed French landscapes using a needle and colored silk threads retired to the “Maguelons” boarding house in the Passy neighborhood in Paris.

Her name was Sophie Blum-Lazarus and she was born on July 16, 1867 in Stuttgart, Germany into a large, wealthy Jewish family that later moved to Frankfurt-am-Main, where there was a large Jewish community.

Sophie Blum-Lazarus had studied painting at the Frankfurt Academy of Beaux-Arts.

Later she left for Munich and enrolled in the Academy of Beaux-Arts there. While in Munich she made copies of works by great masters of the past. The artist subsequently switched from oils to silk thread and around 1900 left Germany, which she continued to consider her country, incarnated by Goethe, Schiller or Beethoven.

One day she wrote to her young Parisian friend, Madame Simone Selz, “what is at work is Prussia, but that is not the educated and cultured Germany”.

The Jewish woman from the Frankfurt community was cultured and refined and could not accept the idea that Germany was inhumane, that it could be perceived as no longer benevolent.

In the country where she was born she married a Jew, Daniel Blum, who was an industrialist, and went to live with him in Paris, where she socialized in highly reputed artistic and literary circles.

Husband and wife were two souls united, unable to live without each other. When her beloved husband died in 1937, she left the comfortable Hôtel Lutétia and moved into a modest boarding house, “Les Maguelons”.

She devoted her days to her artistic work, and at night she stayed in her room in the little boarding house…writing letters to her dear departed husband, telling him of her sufferings, her sorrow, her aspirations, her eyes constantly shedding hot tears. She often visited his grave in the Montparnasse cemetery.

She belonged to the Salon des Indépendants, where she exhibited her work for the last time in 1937. She was enamored of the colorful, sun-drenched vastnesses of Italy and the south of France, where she often spent time.

In one of her letters to Madame Selz, written on the way to Italy, the artist deplored the tragic destiny of her persecuted people, scattered to the four corners of the earth and hated everywhere.

During the Second World War Sophie Blum-Lazarus, who had become a French citizen, refused to leave Paris, even when the troops of the Third Reich were at the gates. She was unwilling to quit the city where her husband’s grave was found. She wished to rest beside him, united with him in death as she had been in life.

On July 8, 1944, at two o’clock in the morning (at night in Yiddish), the inhabitants of the tranquil little boarding house to which the artist had retired were brutally awakened by the doorbell and ever heavier blows on the door. Someone went to open it.

German police! shouted a German voice. The Gestapo, representing the Third Reich, had come after its victim: the aged Jewish artist, Sophie Blum-Lazarus, who had had such faith in the Germany of Goethe and Schiller.

The men entered her bedroom and told her to gather up her affairs at once. She took her colorful silk thread pictures and some sketches she did not want to leave behind and put them in a bag. When one of the Gestapo men asked her why, what good it would do her, the old lady answered that it was her life, her blood.

She was taken on a dark night to Drancy, and from there she was deported on July 31, 1944, three weeks after her arrest. She was 77 years old.

EXTRACT FROM THE LETTERS FROM SOPHIE BLUM-LAZARUS TO HER FRIEND, MADAME SIMONE SELZ

I am very sad at what has happened to you. All my thoughts are with you at the mention of your poor brother. I feel your sorrow. Death, death. What a terrible companion for those who are still alive. Some can lose themselves a bit in their work, some in their garden, others, like me, for example, in my “tapestries”.  If one can say that is “living” or “having lived”.

(This letter was written after the death of Madame Selz’s brother.)

You have recommended that I should read “le Crapouillot” about the Germans. I looked at the obscene caricatures and that was enough for me. It is regrettable that literature and the press wallow in such hatred and poison public opinion. I have been a Frenchwoman for 25 years, I love France very much, its refined people, its land. Still I must tell you that Germany is not all like that.

This repugnant obscenity is a bad Parisian defect. No, that is not the good erudite and cultured Germany. You wrote me in your last letter that you had wanted to read Goethe and that you had finally given it up. That is no doubt best; works of genius should be read only in their original language. Once translated, they lose a great deal.

That goes also for the Tanakh (the Hebrew Bible) with King David’s psalms. The German language has produced some tiny, finely chiseled gems. With Faust and Werther, Goethe succeeded in creating masterpieces merely for a humble flower.

As genius is always universal, one mustn’t have any narrow preconceptions.

On Sunday we went to Blaise Cendrars’. He lives in a little rustic house in a lovely, charming region. A house full of roses that he bought for 500 francs, whitewashed, with a white table, books, a typewriter, two small windows with white curtains and hyacinths everywhere. It was really quite lovely, and the man is himself personable and handsome, always ready with some amusing repartee. On the way back a full moon spilled its light over the whole region.
A young writer gave me two books he wrote in Spain. Next to the illustrations in the book he drew two little patterns. These books, “Paupières” and “Tolède”, are interesting enough, even if “Paupières” is too literary.

Today we have buried Brianen. His was a fine life; he worked right up to his death; he was really someone.

I am looking forward to being in Milan soon, where I will see my little family and other immigrant friends. Israël, what a poor people! The chain of calamity is still hanging over us. We are scattered, we are dispersed throughout the world and we are hated!