Jakob Brzezinski and his daughter Charlotte, who were both deported on Convoy 77.

In order to carry out this research, the 10th grade students from class 6 at the Louis Vincent high school in Metz were assisted by Mr. Richard Niderman, who is the first cousin of Martha, Jakob’s wife. Born after the war, he knew neither Jakob nor Martha, but he has a collection of numerous documents left by his brother Joseph. He wrote a short summary for us, provided us with numerous documents and met with us by videoconference.
For further information, we refer readers to our biography of Charlotte Brzezinski, Jakob’s daughter.

“Yakob Brzezinski: In the letters that my father, a prisoner in Germany, sent to his children throughout the war, he kept asking about his nephew by marriage. He never told me about him, you are doing it for him. Thank you.”
Richard Niderman 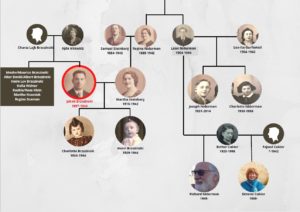 A Polish immigrant in France

Jakob Gedalja Brzezinski was born in Lutomiersk, Poland, in 1897 or, according to certain documents, on April 7, 1898. He may also have been named James or Yakow. He was the son of Charsz Lajb Brzezinski and Ajda Ickowicz. Jakob had three brothers and four sisters. We know the identity of his family members from a court judgment made in Tel Aviv in 1949, which related to a piece of land Jakob had bought there in the 1930s. When the land was sold, the few surviving family members had to have the death of Jakob and his heirs officially recorded. This judgment, originally written in Hebrew, was translated for us by Richard Niderman. It provides information about all of Jakob’s brothers, sisters, nephews and nieces and shows that most of them died during the Holocaust. 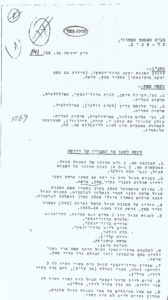 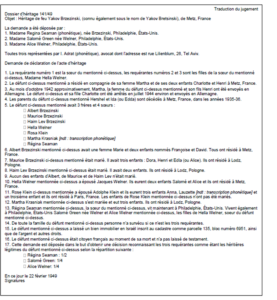 Jakob’s residence records reveal that he arrived in Metz, in the Moselle department, in 1926. He arrived there from Longlaville, near Longwy, in the Meurthe-et-Moselle department, but we do not know when he originally migrated to France. According to their residence records, the first traces in Metz of his brother, Alter David, also known as Albert (who may have Jakob’s twin) and his sister, Hella Welner, date back to 1927. It is therefore possible that all three of them left Poland together. 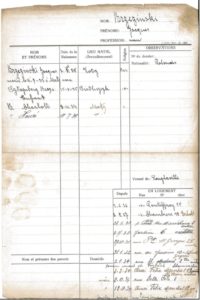 The residence cards of the various members of the family and Alter David’s marriage certificate help to clarify the situation: 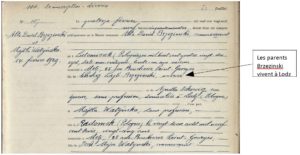 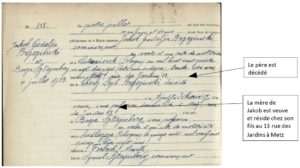 When Alter David’s was married in Metz in 1929, the Brzezinski’s parents were both living in Lodz, Poland, but by the time Jakob got married in 1933, his father had died and his mother was living with him in Metz. It becomes clear that after she was widowed, she came to live with her children in France in 1931. Two of her children, Ruchla and Maurice, arrived at the same time. They left Metz in 1935 when their mother died in the Jewish hospice soon after she was admitted.

In 1933, Jakob married Martha Steinberg, the daughter of Samuel Steinberg (or Stajnberg) and Regina Niderman. Also known as Bella or Basza, she was born in Poland in 1915 and had been living in Forbach, in Alsace-Moselle, since 1920. She was considerably younger than Jakob and had lived most of her life in France. 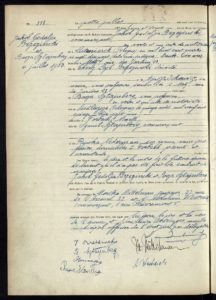