Fortunée SEVI was born in 1882 in Constantinople, the capital of the Ottoman Empire.

Her parents were natives of Constantinople and Odessa.

She married Nissim CAMHI in Constantinople in 1902.

A first child named Régine was born in Constantinople in 1904 and died in Paris in 1905, which suggests that the family moved to Paris between 1904 and 1905.

When they arrived in France the family name CAMHI was transformed into CAMBI.

The following children’s place of birth reveals that after residing in Paris’s 12th district, the family moved to n° 41 rue Basfroi in the 11th district. Moreover, the manager of the apartment house on the rue Basfroi has attested that the family rented there starting in 1908.

Her husband was an itinerant merchant on the markets, where he sold cutlery, tableware, razor blades, some of which under his own brand.

When she arrived in France Fortunée already knew some French; her family, however, spoke Ladino, a language derived from Old Castilian and Hebrew.

Fortunée and Nissim’s civil marriage was held in Paris on August 25, 1914.

Now the whole family was French.

Fortunée played a major role in her domestic life, and in social life as well, at the service of her family and neighbors.

Fortunée was arrested with her husband Nissim at their home at n°41 rue Basfroi in the 11th district of Paris, and they were sent to the Drancy camp, where one of their sons had been held from August, 1941 to December, 1942.

From Drancy they were transferred to the Bobigny train station on July 31, 1944 and put in convoy 77, which transported them to Auschwitz, where they died, officially on August 5, 1944.

On that date she knew that another grandchild was to be born by the end of 1944, a child she would never know. 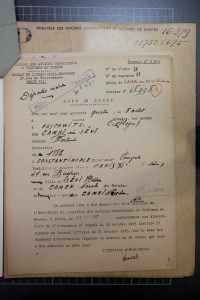