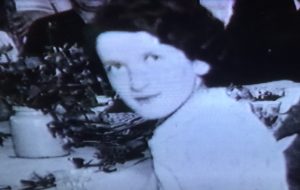 Charlotte Lewin was born on January 15, 1926. Her father, Moszek or Mojzesz (Moïse) LEWIN, aged 34 (born in Lublin on July 24, 1891 in Russified Poland, annexed to the Russian Empire), was a second-hand goods dealer and stallholder on the outdoor markets, who owned a shop in Paris. Her mother, Bajla (Berthe) LEWIN, was 32, née BRONSZTEJN (BAURENSTEIN) in Kasniez (Occupied Poland) in 1893. Charlotte had two sisters and three brothers – Israël, born in 1916, Esther born in Lublin in 1917, Anna born in 1922, Maurice born in 1923, and Raymond born in Paris in 1930.

In 1924 the LEWIN family left Poland to immigrate to France. Mojzesz and Bajla LEWIN settled with their four children in the 18th district of Paris. The family grew large with the births of Charlotte in 1926, and later her little brother Raymond.

In 1936 Israël enlisted at the age of 20 in the International Brigades in Spain. Like André MALRAUX, he went “for the love liberty and fraternity” (1). In November 1936 Charlotte’s brother was one of the 5000 casualties on the Spanish Republican side in the Battle of Madrid.

In August 1939 Raymond and Charlotte were sent by their school to summer camp at Senones in the Vosges.

After war was declared on September 3, 1939, Raymond and Charlotte’s camp was evacuated to Villers-sur-Mer in Normandy.

At the age of 49 Charlotte’s father enlisted in the French Army to defend his foster country, although neither he nor his wife, despite their request, had been naturalized (they were stateless).

Having left for a month of vacation, Charlotte and Raymond stayed for a year in Normandy. They only got back to Paris in July 1940, after the armistice of June 25th. Charlotte went back to school in Paris at the start of the new school year.

On July 16, 1942 Charlotte, Raymond and their parents were arrested during the Vélodrome d’Hiver Roundup. They were all taken to the police station on the Place Jules Joffrin. Charlotte was freed on the grounds of being French. She then found herself, along with her two sisters, Esther and Anna, and her brother Maurice without support.  Her parents and her brother Raymond were interned on July 18th in the camp at Pithiviers. Mojzesz LEWIN was deported to Auschwitz in convoy n° 13 on July 31, 1942 at the age of 51. Bajla, Charlotte’s mother, was deported on August 3, 1942 in convoy n° 14 to Auschwitz. Charlotte’s younger brother Raymond was deported to Auschwitz in convoy n° 24 on August 26, 1942. He was 12 years old.

Abandoned by everyone, the three sisters (Charlotte, Anna and Esther) and their brother Maurice suffered weeks of distress and despair. Esther was without any news of her husband, who had been taken prisoner of war. Anna found refuge in a boarding school of an organism called “La protection de la jeune fille israëlite” [Shelter for Young Jewish Women], where Charlotte joined her regularly. Maurice worked in a furrier’s workshop.

At the end of November 1942, after Maurice had left for the Free Zone, Charlotte joined her sister Anna in her boarding school on the boulevard Magenta. The two girls were subsequently moved to several different UGIF [General Union for the Israelites of France] pensions for young girls. At the end of April 1944 Charlotte was separated from her sister Anna and placed in a boarding school on the rue Vauquelin.

During the night of July 22, 1944 the police invaded several Parisian orphanages, including Charlotte’s. She was taken away to Drancy, as were around 400 children that night. Anna, boarding at a different school, eluded arrest. All the children of her school were able to get away before the police arrived.

On July 31, 1944 Charlotte was deported to Auschwitz in convoy n° 77. She was 18. She left Paris a month before the liberation of the capital. The train journey took three days and three nights in the full heat of summer. 726 people were gassed upon the convoy’s arrival on the night of August 3rd. Convoy 77 was initially made up of 1300 prisoners. Charlotte was one of the people selected for work. On the morning of August 4th , number A16752 was tattooed on her left forearm.

Charlotte lived through the hell of Auschwitz-Birkenau (Lager B 2) for three long months, until October 27, 1944, when she was selected by Joseph MENGELE with ten other women. Shut up in a holding pen for three days and nights she waited to be trucked to the gas chambers. When the roll was called on October 30th, the Germans took Charlotte and another woman out of the ranks, a new selection that was to save Charlotte’s life.

On October 31, 1944 Charlotte left the Auschwitz-Birkenau camp. After a long journey in a cattle wagon, in which she found Berthe, her boarding school friend, she arrived on November 3rd at Bergen-Belsen in Germany. Charlotte was to remain in that concentration camp for three months. On January 15, 1945, “the women whose turn it was to scrape the bottom of the barrel said, ‘We give up our turn to Charlotte; she can scrape the bottom all alone; it’s our birthday present’ (2). That is how Charlotte’s fellow inmates “celebrated” her 19th birthday. On February 1, 1945 three German civilians accompanied by soldiers came to the camp to make a selection. Charlotte lied about her age and, pretending she was a seamstress, succeeded in getting herself chosen.”

On February 5, 1945, Charlotte arrived at Raguhn, near Leipzig, after three days and nights in a freight train cattle wagon. In that camp certain women were assigned to work in a factory. Others, including Charlotte, were given the task of keeping the camp clean.

There Charlotte survived a bout of exanthemous typhus [spotted fever].

On April 13, 1945 the camp was evacuated under the pressure of the Allies. Charlotte was once again put on a train for “the trip of horror” (3). After eight days in a cattle wagon the train stopped near the camp at Theresienstadt in the annexed Sudetenland.

On May 10, 1945 the Russian Army liberated the camp, but it was not until May 31, 1945 that the French women began to be repatriated. FREEDOM at last!

On June 2, 1945 the airplane Charlotte was on left Pilsen and landed several hours later at Lyon. After medical examinations at the hospital of Lyon-Sathonay, Charlotte took the train to Paris on June 6th.

After being treated, fed and housed she was reunited with the sister Anna on June 7, 1945 and with her older brother Maurice on June 16, 1945.

She was later to learn that her father had been shot after the uprising of April 19, 1943, and the subsequent liquidation of the Warsaw ghetto.

In March of 1947 Charlotte began working as a secretary.

In February 1949 after her sister Anna’s marriage, Charlotte lived for several years alone, working for a dental institute in Neuilly. In September 1955 she met Pierre Schapira, a patient in the waiting room of a dentist friend. There she chanced upon love. They got married in January 1956.

In the autumn of 1977 Charlotte decided to go back to Auschwitz. Her daughter Aline went with her. That journey was, in her own words, a shock, but also a way to fight her nightmares.

In 1988 Charlotte returned again to Auschwitz, accompanied by her husband Pierre. Some fifty history teachers were also on the trip.

Charlotte Schapira considered the transmission of this memory exceedingly important. She met with young people, testifying in junior and senior high schools for several years. On December 8, 2005, invited by Bertrand Bossy, teach of history and geography, Charlotte testified in Cholet before the students of the Renaudeau High School.

Charlotte passed away in 2016.