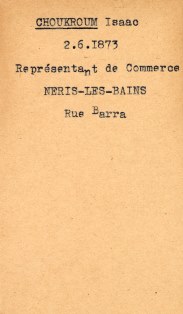 Isaac Choukroun was born on December 11, 1896 at Blida, Algeria. He was the son of Moïse Choukroun and Sadia GUETANU.

He married Violette née TIKOZINSKI on March 17, 1926 in the 10th district of Paris, and they had a son, Maurice, born in Marseille.

A merchant and salesman residing on the rue Richet in Paris (9th district), he took refuge in Néris-les-Bains on November 16, 1942, first on the rue Voltaire, and then on the rue Barra.

(Source of the document below: Departmental archives of the Allier department : Anti-Semite Measures 996 W 254.01. Repertory of the Jews in Néris-les-Bains in 1942)

He was listed by the French state as a French Jew in 1943.

(Source of the data sheet below: Departmental archives of the Allier department 996 W 778 W 112)

The date of his arrest is not known.

He was interned in the Mal-Coiffée German military prison at Moulins (Allier department), then transferred on July 15, 1944 to Drancy, where he was attributed the I.D. n° 25139.

(Source for the document below: Mémorial de la Shoah C77_12)

His name is on the plaque in Néris-les-Bains of those who “Died in deportation”.

The plaque, pictures below, on the War Memorial at Néris-les-Bains was created after research done by the AFMD of the Allier department. It was inaugurated on May 8, 2008 by Monsieur Jean-Claude DE PIN, the mayor of Néris-les-Bains, Madame Maud LORCH and Madame Colette BOURGOIGNON, vice-president of the Montluçon-Commentry section of the FNDIRP [Fédération nationale des déportés et internés résistants et patriotes]. Our thanks to the municipality of Néris-les-Bains for its commitment to the memory of the Deportation.

Photo : AFMD of the Allier Department.

“Died in deportation”, according to the decree of the National War Veterans Office on July 2, 2012, published in the Journal Officiel of August 17, 2012.

– Archives of the Puy-de-Dôme Department: Repertory of the Jews in the Allier Department in 1943