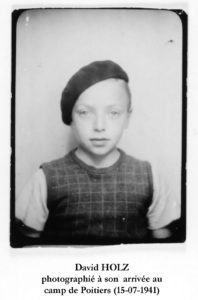 This biography was written by the 9th grade ‘B’ class of the Jules Ferry secondary school in Neuves-Maisons, in the Lorraine region of France. The students studied the archives provided by the Convoy 77 association, along with various testimonies and literary and artistic works concerning the Holocaust, and reflected on the importance of the duty to remember. They had the opportunity to meet David’s first cousin, Henri Rozenfarb, who provided them with a wealth of essential information and documents.  The class was also able to find, with some sadness, David Holz’s name on the wall of names, along with this photograph of him and his sister, in the Children’s memorial area of the Shoah Memorial in Paris.

David was born on February 23, 1931 in Nancy, in the Meurthe-et-Moselle department in the east of France. The Holz family was an important family in the Jewish community. There are photos of them gathered around their grandparents, who were very devout. The grandfather sacrificed animals, always wearing a yarmulke, which is worn to remind the wearer that God was always above him. A spiritual leader, he also wore a beard and sidelocks. Special headwear was devoted to each religious or family event.  Like many Jewish women, the grandmother covered her hair out of modesty and to avoid attracting attention. She ran a kosher restaurant on the rue des Ponts in Nancy.

David was the eldest child in his family. His parents, Moses and Blima, a couple of Polish origin, had five children after David: Myriam, Paul, Joseph, Jacques and Emmanuel. His mother used to tell him that in later life it would be up to him to protect his brothers and sister. Little did he know what was soon to happen to them or the responsibility that this would involve. The family lived on rue de La Salpêtrière, in an apartment that David loved very much. After school, he was able play with his neighbors in the courtyard of the building. He started his education at a school on rue des Fabriques. His academic performance was good and his parents were very proud of him. David certainly appears to have had a pleasant childhood with his family and friends.

This happy time was to be short, however. Events were overshadowed by the rise of anti-Semitism in Europe. Moses and Blima’s application for naturalization was refused and, starting in 1939, the Prefect of Meurthe-et-Moselle decided to expel foreign Jews to the Libourne area, in the southwest of France. The family’s departure was swift and abrupt. Only sixty-five or so pounds of luggage were allowed and, amidst the haste, everyday objects such as the grandmother’s sewing machine and the grandfather’s walking stick were left behind in the apartment. Some of his uncles were housed in a village priest’s house and received a refugees’ allowance to support themselves. David, meanwhile, had been naturalized as French citizen after Myriam was born, but in 1940, soon after Emmanuel was born, he had to leave Nancy. David was nine years old when he found himself in Berthegon in the Vienne department. 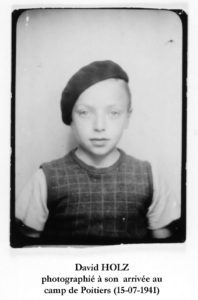 On arrival at the Poitiers camp on July 15, 1941, David had his picture taken. He appears carefree and has an innocent smile on his face, not yet realizing the hell that was ahead of him. His blue eyes are full of life and his blond hair is still combed back neatly. This new life, which was just beginning, was extremely difficult. People were malnourished and poorly housed. To preserve a little privacy, families hung up sheets as partitions, but the sheets did not stop the noise or anxiety. David’s family, with their six children, found it difficult to manage. The parents made a written request asking for the children out to be allowed out of the camp, where they would be safer and healthier. This was accepted in July 1941. David and his brothers and sister were afraid of being separated from their parents, not knowing when they would see each other again. In November 1941 he joined his grandparents in Berthegon.

After the death of their grandfather and a spell at the Château de Vayolle, David and Jacques were placed in the Secrétan orphanage for Jewish children in Paris, on rue Lamarck in the 18th district. Their lives were more comfortable there and activities, sometimes festivities, helped pass the children’s days. David had a favorite caregiver. One day, to celebrate a holiday, he asked her if it would be possible to make a card for his uncle Samuel. She agreed, and as he was making the card the other children in the orphanage were interested as well and they all decided to make their own cards. The days there were quiet and all very much the same. They all woke up at half past six and the caregivers prepared breakfast while the children got dressed. They ate a piece of bread, sometimes with a knob of margarine. For the rest of the day, they were kept busy with activities such as skipping rope, dolls or marbles. Lunch was made up of vegetables and sometimes potatoes but very rarely included meat. The latter part of the day was taken up with games and activities. David, like all Jews, had to wear a yellow star. Parks were forbidden to them and people gave them looks that seemed very apprehensive, if not hateful. These glances upset the children very much.

Following a bombardment, David and his brothers spent a few days in hospital before being transferred to the Drancy camp on July 22, 1944. Living conditions at Drancy were wretched. Many children fell ill due to lack of hygiene and care and it is unlikely that David was unaffected. This camp was the last stop before the gas chambers. The Jews used to say that they were going to an unknown destination called “Pitchipoï”.

The children were loaded into a cattle cars where there was no food or water. Over 1300 of people left that day along with David, Jacques and Joseph. The smallest wagons held forty children who were all crammed in on top of one another. They were hungry and thirsty and many died as a result of the poor conditions and contagious diseases, one of which had already claimed Jacques’ life. No one spoke much in the wagons because the atmosphere was so morbid. David felt as if he was suffocating and would vomit as soon as he inhaled. Indeed, the bodies of those who died remained in the wagons until they reached the camp. Some people whispered advice to the children and said that they should lie about their age. Once they arrived in Auschwitz-Birkenau, the two brothers were taken straight to the gas chambers. It was there, suffering and afraid, that that they lived their last moments.

The 9th grade ‘B’ class of the Jules Ferry secondary school in Neuves-Maisons, in Lorraine, under the supervision of their teachers, Blandine Binetruy and Christine Labrunye 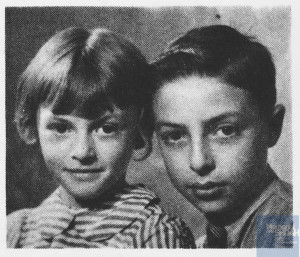