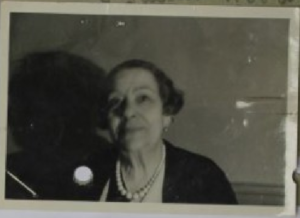 researched and written by the 11th- grade class of the Raymond Poincaré High School in Bar-le-Duc, under the supervision of Monsieur Cané.

Portrait of a courageous woman

Eugénie Michel was born on July 8, 1868 in Saint-Dizier in the Haute-Marne department of the Grand Est Region. She was the daughter of Jacques Michel, a thirty-year-old peddler from the Bas-Rhin department in Alsace, and of Luce Mayer, a 25-year-old housewife from Saint-Dizier.

She spent a good part of her childhood in the Marnaval workers’ district on the rue de Joinville.  According to the Histoire de Saint Dizier, written by Father Charles Didier and graciously provided by the city’s archives, Marnaval is an industrial, working-class district devoted to steel works. It took off after the War of 1870, driven by the Marnaval iron-mongering company, which enlarged and modernized the factories.  On March 1, 1881 Mr. Emile Giros, who wished to extend the factory network, set up in Wassy the Champagne and Saint-Dizier Canal Steel Company. It exploited the blast furnaces, brickyards, sheet metal works, wire drawing mills and steel foundries located over grounds of 1120 hectares (2800 acres) in Marnaval Saint Dizier and connected by private railroads to the national Eastern Railway and to special ports on the Haute-Marne Canal. The rue de Joinville in Saint-Dizier, Marnaval district around 1868, where Eugénie grew up Her childhood was that of a little girl in a working-class district, brought up in the noise of factories, where her mother offered her services as a laundress to the workers. Eugénie married Louis Raphaël Lallemand, a skilled worker, on May 24, 1892. A daughter, Lucienne Raphaëlle Lallemand, was born to them on September 19, 1893.

The couple moved to n° 11 rue de Lacondamine in the 17th district of Paris.

It was in March of 1943 (when she was 75!) that Eugénie and her husband joined the Hector resistance network. She served as a letterbox, i.e. she kept compromising documents (such as the clandestine press) in her home and passed messages. It must be remembered that a 75-year-old woman in 1943 was absolutely not in the same physical shape as she would be today, especially if she came from a lower-class milieu, in which living conditions were harder than they now are. The students in our class wish especially to salute the courage of her commitment.

As confirmed in the 1963 testimony of Maurice Southgate, one of the founders of the network (who was himself arrested on May 1, 1944), the Lallemands served as letterboxes along with the Rousseaus, who lived on the boulevard Saint-Michel, for Jacques and Pierre Hirsch, members of the network.

Jacques Hirsch is the Lallemands’ son-in-law.

The Hector network was a French resistance network set up in the Occupied Zone by Alfred Heurteaux and Maurice Southgate of the SOE (Special Operations Executive, a section of the British secret service), and financed by the intelligence service of the Free French Air Force. Alfred Heurteaux was given the job by Xavier Viallat, then the undersecretary for veterans, of organizing the Légion des Combattants in the Northern Zone. Heurteaux took advantage of his pre-war friendships and his connections in the veterans’ circles to set up an intelligence network. It was not a structured regulation military network, but rather a hazy cluster of small amateur groups connected in constantly shifting ways.

With Robert Guédon’s agreement the Robert cells in the provinces passed under the aegis of the Hector network.  Heurteaux funds the Paris section of the National Liberation Movement launched by Henri Frenay, Robert Guédon, Colonel Ronin, head of the Vichy Air Force’s Intelligence Service, and General Bergeret.

German counter-intelligence in Paris slipped a V-Mann (informer), Andreas Fomer, alias Albert Richir, into the Vernon Hector cell. It was the beginning of the network’s demise.

Eugénie was arrested on May 13, 1944 at twelve noon at her home by four Gestapo agents, as confirmed by the testimony of the concierge, Léa Banquerel. Her husband Louis was arrested the following day. The archives do not reveal what became of him.

From May 13 to July 29, 1944 Eugénie was held in the Fresnes penitentiary. She went through the Drancy camp from the 29th to the 31st of July. Deported in convoy 77, she survived the journey. Given her age and the despicable transportation conditions she must have had an indefectible will to live. She died the day of her arrival, August 5, 1944. Because of her age the Nazis probably sent her directly to the gas chamber.

In May of 1945 her daughter, Lucienne Raphaëlle Hirsch-Lallemand, and her son-in-law, Jacques Hirsch, put in a request for a certificate of deportation and a missing person search.  They obtained an official death certificate on April 22, 1948. Eugénie and her husband, Louis Raphaël Lallemand, received the mention “died for France” the same year. This mention is delivered when death is imputable to an act of war.

The 11th-grade class of the Raymond Poincaré High School in Bar-le-Duc and their teacher, Monsieur Cané, wish to thank the Convoi 77 Association for granting it the honor of producing the biography of such a great lady.