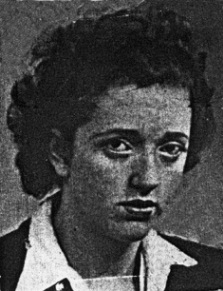 Translated  from the biography established by the AFMD (Friends of the Foundation for the Memory of Deportation from the Allier Department):

She was the daughter of Moïse FENSTER and Claire Fanny née VERKAUF.

Her father died on October 5, 1936 in Strasbourg (Bas-Rhin department).

The family — Fanny, her maternal grandmother Sara, Hélène and Israël —left their residence at n° 4 Grande Rue in Strasbourg (Bas-Rhin) in July, 1939 to seek safety in Vichy (Allier department). They settled at n°5 rue de Provence, where Claire opened a hosiery shop.

She was given French citizenship as Moïse’s minor daughter by the decree published in the Journal Officiel of the French Republic on April 7, 1929, page 4158.

The FENSTER family was repertoried as French Jews at Vichy under the terms of the French state’s anti-Semitic Law of June 2, 1941.

(Source for the two lists below: Departmental archives of the Allier department 756 W 1)

As an office employee she worked a secretary in the accounting department of the Messageries Hachette, which had pulled back from Paris.

On that Thursday, November 25, 1943 Hélène was at work. She relates: “Toward 5 o’clock the news went round: there was a roundup taking place in the shop located on the corner of the Boulevard Carnot, a hosiery wholesaler from which my mother got supplies. I rushed from work to our flat, where I should have found my mother and my brother. It became obvious that my mother and brother had been picked up and that I should in no case stay at home. I nevertheless went into the apartment and hastily got a few things together!

There I was out on the street with about 20 francs in my pocket and not knowing where to go!”

She was to spend several days staying here and there with trustworthy friends before finding a job with the Messageries Hachette in Clermont-Ferrand (Puy-de-Dôme department). She found a room at n° 14 rue Morel-Ladeuil.

“On that June 22, 1944 (…) I was at work: at the Messageries Hachette on the rue de la Tour-Fondue near the Place de Jaude in Clermont-Ferrand. It was a room on the ground floor with about twenty desks; I was sitting in the 2nd row… Two men in civilian clothes came in to check identity papers. When they got to me, they said in German, ‘It’s her! We’ve got her!’ “

She was interned in the prison of the 92nd Infantry Regiment in Clermont-Ferrand, then transferred by train to Paris on July 15th, and from there by bus to Drancy, where she was attributed I.D. N° 25129.

On July 31st she was one of the 1300 people deported from Drancy to Auschwitz in convoy n° 77.

Hélène FENSTER wrote, “The trip lasted 4 days, 3 nights: no room to lie down, the slop pail placed in the middle of the car was very soon full and running over!! It was emptied once per day.

Arrival on August 3, 1944 at Birkenau around midnight.

The train stopped, the doors of the cattle car were opened to shouts of ‘Raus! Leave your things!’, repeated until the last passenger had got off. We were groggy. Where were we?

For me it was very quickly the abyss. It was dark, barbed wire in the distance, lights, floodlights aimed at us, we could make out nothing, shouts, jostling. I know no one. Where am I? All of a sudden I found myself in a dense column, a tide of human beings, women only, surrounded by German S.S. and burly men in striped clothing, screaming, pushing us toward the ‘welcoming committee’: Mengele and his S.S. aids. Everything went very fast: go left, go right, and we advanced into the abyss.”

“Morale was relatively good for several reasons: We had arrived at Birkenau after the Allies had landed in Normandy (June 6, 1944); we could also hear the canons! The Russians were 40 kilometers [29 miles] away, news reached us from the outside Kommandos [forced labor teams], fake reports as well!!

Physical condition not too dilapidated at first (…), but gradually we were tortured by hunger, impossible to keep a bit of bread for the next day, wracked by hunger, risk of having it stolen during the night”.

On October 27th, after an ultimate selection before MENGELE, departure for Gross Rosen. After three days, arrival at the Kratsau Labor Camp located in the Sudetenland in Czechoslovakia. At first she carried out chores in the yard, then worked in the munitions factory, in teams, one week by day, one week by night.

“The hell of Kratzau lasted 7 months.

At last during the morning of May 9, 1945 (one day after the signature of the armistice) Russian soldiers opened the doors and the gates of the camp. And so there were around 1000 women left to their own devices. No SS guards, no Russian soldiers, just starving women, drunk with joy and freedom”.

In Paris she was put up by the SPRUNG family, whom she had met in Vichy.

After two months she reopened the shop of her mother, who had not come back from deportation. Nor had her brother.

(Source for the document below: Interdepartmental Administration for the War Veterans of Clermont-Ferrand)

On January 5, 1946 she was a shopkeeper residing at n° 2 boulevard Carnot in Vichy when she married Gabriel RAMET in the 11th district of Paris.

Born on September 24, 1920 in Warsaw, Poland to Lejbus RAMET and Estera née KAFTAL, Gabriel Mendel RAMET was arrested on August 20, 1941 in Paris. He was to spend 22 months at Drancy before being deported on June 23, 1943 to Auschwitz in convoy n° 55. Selected for work duty and given I.D. n° 126147, he was sent to the Jawischowitz coal mines, then back to Monowitz. He took part in the January 1945 evacuation to Gleiwitz. He finally ended up at the labor camp of the Mittelbau-Dora Tunnel, where he worked on the V-1 rockets, then was evacuated to Bergen-Belsen, where he was liberated at the end of April.

(Source for the document below: Family archives)

(Source for the document below: Interdepartmental Administration of the War Veterans of the Puy-de-Dôme department)

– Direction Interdepartemental Agency for the War Veterans of Clermont-Ferrand 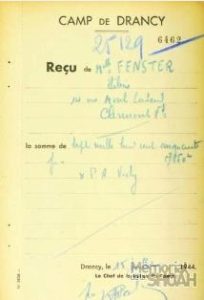 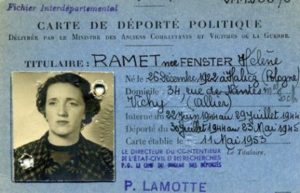 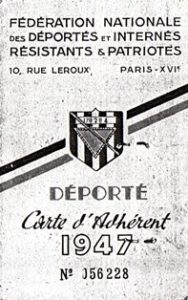 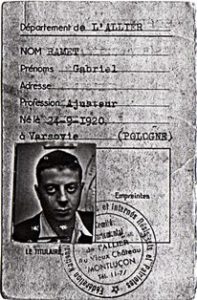 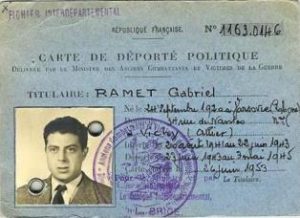