Fernande had four brothers and sisters: Annette (who died in 2000, had one son), Edmond (who died in 2011), René and Elise. She was a Jewish schoolgirl and her mother was a housewife.  They lived at 25, rue Anatole France in St-Fons, a town south of Lyon.

On July 12, 1944, her life was turned upside down. She was alone at home with her mother when they were both arrested by the Goetzmann-Benamara couple, in front of their neighbors, Maria Ribeiro and Lucie Verelle. Both couples were French, but were Gestapo collaborators. They must have been arrested solely on grounds of “race”, since according to their father they were not part of the Resistance.  They were taken to Montluc prison.

Fernande was then taken to the Drancy transit camp on July 24th. She was deported to Auschwitz on July 31, on Convoy No. 77. We do not know the exact date of her death:

– Another says that she died on the day of her arrival at Auschwitz (see document 2).

Later, her father submitted missing persons reports (see document 3) for Fernande and her mother. He went on obtain, on their behalf, the status of “Mort pour la France”, or “Died for France“, and to have them declared as having been political deportees, as a result of which he received a pension.

– Death certificate provided by the Town Hall at St Fons 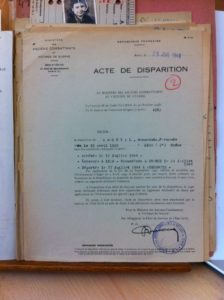 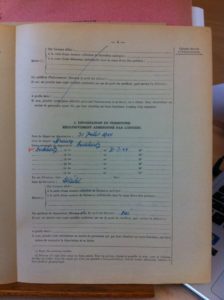 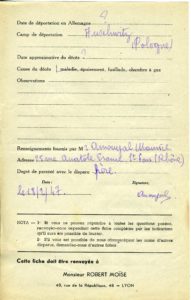 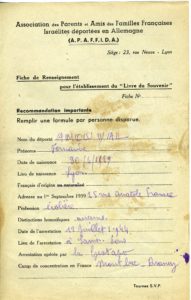 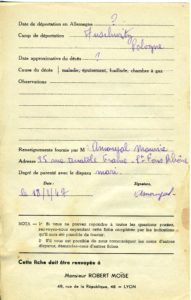 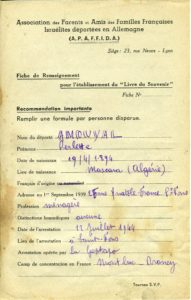 11th grade students at the Cité Scolaire Internationale high school in Lyon, Elsa, Sina, Glwadys, Agnès and Gatien, under the guidance of their history and geography teacher, Frédéric Fouletier. 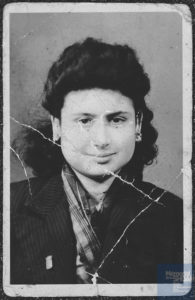