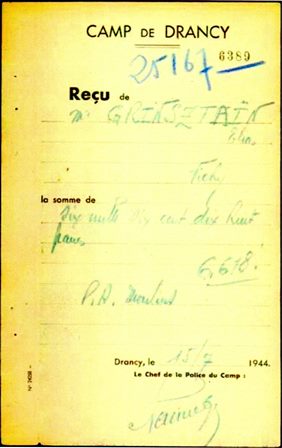 Translated from the biography established by the AFMD ‘Friends of the Foundation for the Memory of the Deportation from the Allier Department):

Izaak (Elias) Grinsztain was born on September 19, 1895 in Zawierice (Poland).

A dealer in leather goods, he married Chawa BOMGARD, born October 8, 1903 at Iha, Poland. They had two children and in 1932 lived at n° 9 rue du Chalet in La Courneuve (north Paris suburb).

He was granted French citizenship in 1926 according to the Center for Contemporary Jewish Documentation.

He left the Paris area and moved to Marseille (Bouches-du-Rhône department), where he lived at n°4 rue de la République.

For some unknown reason he went to Vichy (Allier department), where he was arrested and interned in the Mal-Coiffée German military prison at Moulins (Allier).

Document below: © Receipt n° 6389 for money found on him in a personal search at Drancy, transmitted by the Contemporary Jewish Documentation Center. (P.A. stands for Police Allemande (German Police). Our thanks.

(Source of the document below: Center for Contemporary Jewish Documentation)

“Died in deportation” according to the decree of the National War Veterans Office dated October 6, 2011, published in the Journal Officiel N° 287 of December 11, 2011.

– Klarsfeld, Serge: List of the transfers from Moulins to Drancy on July 15,