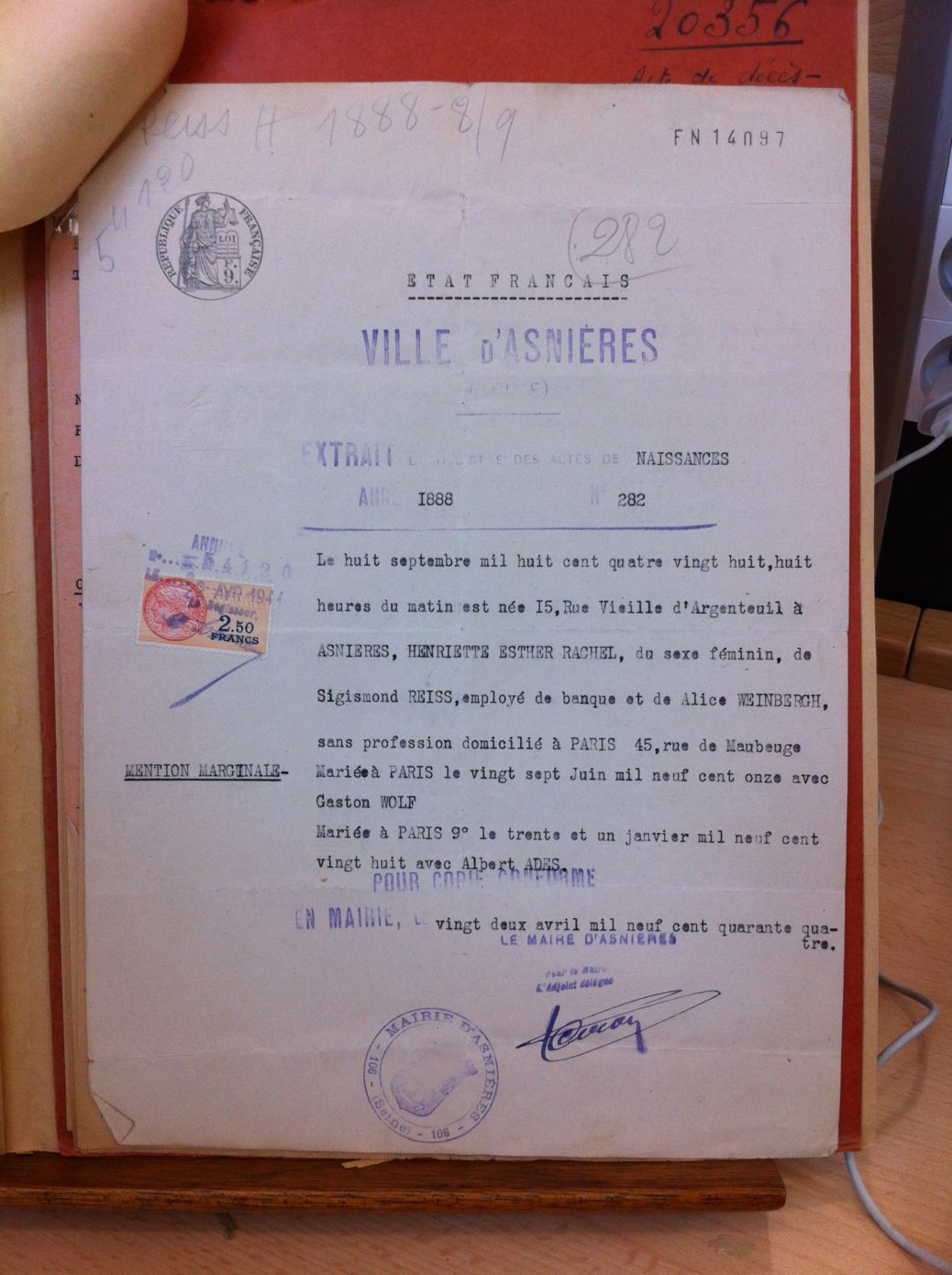 This biography was researched and written by Jérôme ROUZAIRE, a first year Masters student of Archives, 2018/2019, under the supervision of Professor Marie-Anne MATARD-BONUCCI,

In the absence of a photo of Henriette, we are showing a copy of her birth certificate, issued in Asnières, France.

Henriette Reiss was born on September 8, 1888 in Asnières[1] in the Seine department of France, a little  north of Paris[2]. She was the daughter of Sigismond Reiss, a bank clerk, and Alice Weinhberg, who was not working at the time of her birth. Sigismond Reiss was born in Pressburg, Austria, on January 26, 1856 and was naturalized by decree in 1900. At that time, he was a flour merchant[3]. As for Alice Weinhberg, she was born on December 22, 1864 in Paris. Her personal declaration in 1940 allows us to identify her maternal family, since there is a mention of her mother’s Alsatian roots. Sigismond and Alice were married on June 10, 1886 at the Town Hall of the 9th district of Paris.

Henriette’s birth was registered at her grandfather’s address.  We know that she had at least one brother and one sister[4].

Her parents’ first home was in Paris, at 45 rue de Maubeuge, in the 9th district. They then moved, with Henriette, to 33, rue de Bellefond, where she lived until her first marriage on June 27, 1911. She married Gaston Wolf, a merchant[5]. The couple lived at 22 rue du Caire in Paris. Gaston was in trouble with the law on account of the behavior of one of his partners and, after lengthy legal proceedings, was sentenced on November 18, 1912 to six months in prison and a fine for fraudulent concealment of stolen goods[6].

Gaston Wolf fought as a soldier in the First World War and was demobilized on February 24. 1919[7]. During the war he never came home from the battlefield. On December 10, 1918, before he was demobilized, the Civil Court of the Seine granted the divorce of Henriette Reiss and Gaston Wolf[8]. The divorce proceedings had been started during the war. Among the arguments used to justify the divorce was a notification of Gaston Wolf having left his home.

Henriette returned to live with her mother. Her father, Sigismond Reiss, died on November 15, 1920. On January 30, 1928 she married Albert Adès at the Town Hall of the 9th district of Paris[9].

This marriage ended, once again, in a divorce, on March 6, 1937[10]. Henriette then set up her own antique shop at 57, rue des Saint-Pères[11] and moved with her mother to 202, boulevard Saint-Germain. The business soon became successful[12].

The last known record is dated July 1939. The caretaker of Henriette Reiss’s building reported that Henriette left in September. She did not give notice of leaving, however, so it is not possible to confirm her departure. On the other hand, her absence and the closure of the shop was recorded in June 1940. Following the law of June 2, 1941, Jews were required to take part in a census. Henriette Reiss made her declaration, along with her mother, in Ussel, in the Correze department[13]. The two women were living together at 2, rue Pétain. However, Alice Reiss, Henriette’s mother, declared herself a childless widow, probably to protect her daughter. In the declaration of property section, we notice that Henriette Reiss did not declare any property. On the contrary, Alice provided details of various assets and property[14]. Henriette’s antique shop underwent an Aryanization procedure, a record of which can be found in the National Archives[15].

When her company was subjected to the Aryanization of Companies procedure, its value was estimated at 60,000 francs. It sold, however, for a much higher price, since a Madame Rubben de Lombre offered 100,000. The trade committee involved[16] initially refused to allow the sale but eventually approved it. The first reason given was the low value of the business. The second reason stated was that the sale would create a monopoly for the sale of antiques. This was probably a means of protecting Henriette Reiss’ business, given the sum offered and the fact that the buyer was from the Corrèze department of France[17]. Henriette herself was in Corrèze at the time. Madame Rubben de Lombre said she was buying the property for her nephews, Pierre and Maxime Guérin. Pierre Guérin served as a soldier in the Second World War and was held prisoner in the Sulzbach camp.

This is one of the few pieces of information about the lives of the two women during the Second World War. We know for certain that they moved to Saint-Flour(15) since it was in this town that Henriette Reiss was arrested and from there that she was deported, but what they did between Ussel and Saint-Flour, we do not know[18]. Their presence in the town was most likely related to the owner of Henriette Reiss’s antique shop, a man named Teisseidre, who was a native of Saint-Flour. [19]. Unfortunately, we know neither his date of birth nor his first name, and the surname Teisseidre is relatively common in the Cantal area. However, a Teisseidre from Saint-Flour is mentioned in archives of the Resistance movement, so it seems likely that he played a part in protecting Henriette[20].

Henriette Reiss was arrested on June 11, 1944, in Saint-Flour. A number of people involved in the Resistance were arrested at around the same time[21]. This was an important period in the history of the area around Saint-Flour, and one that is still remembered to this day. Reprisals against the civilians of Soubizergues, on 14 June 1944, were particularly significant. In retaliation for the attack and execution of a German officer, 25 men were executed in order to put a stop to such activities. On the same day, June 14, 1944, the prisoners were taken from the Hotel Terminus, where Henriette Reiss was also staying[22]. They were transferred to the prison run by the 92nd Infantry Regiment in Clermont-Ferrand. No prisoners were kept at Saint-Flour, so one would imagine that Henriette Reiss was transferred along with the others[23].

Another possible hypothesis regarding Henriette’s whereabouts in the aftermath of the events of June 10, 1944 in Saint-Flour is provided by Brother Gérard Mayet[24]. She could have been transferred directly to Vichy before being deported[25].

On July 15, 1944, Henriette Reiss was transferred from Vichy to Drancy. She was then deported to Auschwitz on July 31. Her death was recorded on August 5, 1944, although it is impossible to determine the exact circumstances in which she died.

On December 18, 1947, Henriette Reiss was posthumously awarded the honor “Mort pour la France” (Died for France). Evidence in the form of a letter from a woman from Saint-Flour seems to have played an important role in the awarding of this distinction, but unfortunately it has not been preserved. At the end of the Second World War, her mother requested records relating to Henriette in order that she be granted the honor Mort pour la France. This shows that her mother survived the war.  A further request was made by her sister-in-law.

Henriette’s birth certificate was issued by the Town Hall of Asnières two days after she was born.

[2]     As a result of a legal change that took place on on July 10, 1964, the municipality of Asnières is now in the Hauts-de-Seine department of France.

Before their marriage, Henriette Reiss lived at 33, rue Bellefond and Albert Adès lived at 9 rue Bergère. Both addresses are located in the 9th district of Paris.

[10]   City of Paris Archives, Judgement of the Civil Court of the Seine.

[16]   Resulting from the organizational committees created by the French state by the law of 16 August 1940, the trade committee was responsible for regulating commercial and economic activities, particularly in the context of cooperation with Germany.

[17]   To date, the research carried out in the Departmental Archives of the Corrèze and the Historical Service of the Department of Defense on files relating to the Resistance movement does not allow us to confirm any possible involvement in the Resistance on the part of the Rubben de Lombre family.

[18]   “Les Justes du Cantal“ Collection Mémoire des Hommes, Musum of Anterrieux, 2004. This book confirms that a link existed between Corrèze and Cantal through a network of resistance fighters in the town of Murat. However, we cannot conclude that this was the case for Henriette Reiss.

[20]   Historical Service of the Department of Defense, individual Resistance files, Letter T, name Teisseidre. 5 came from the Cantal department and one was born in Paris.

The weakness of this hypothesis is that among the arrests made on 10 June there was no one named Teisseidre. Did this man manage to flee during the first round of arrests? The second limitation lies in the fact that Henriette does not appear at all in the Cantal accounts. There is, however, mention of an unknown woman in the book by Brother Gérard Mayet, on page 66.

[23]   The main weakness of this hypothesis lies in the fact that Henriette was present in Vichy on July 15 and that there does not appear to have been any transfer of prisoners between Clermont-Ferrand and Vichy.

[24]   In his book, Brother Gérard Mayet discusses the status of a woman he did not know. It could have been Henriette Reiss. The fate of this woman was unknown to him. However, the date of her disappearance coincides with the departure date of the German police force based in Vichy. Unfortunately, this hypothesis could not be proven by a search of the archives.

[25]   In this hypothesis, Henriette would have been the only person to have been transferred directly to Vichy on June 10. This peculiarity could be explained by her religion, since as a Jew she would have been destined for deportation immediately. 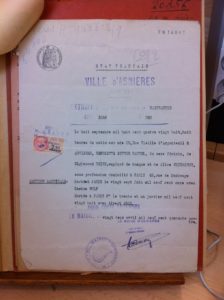