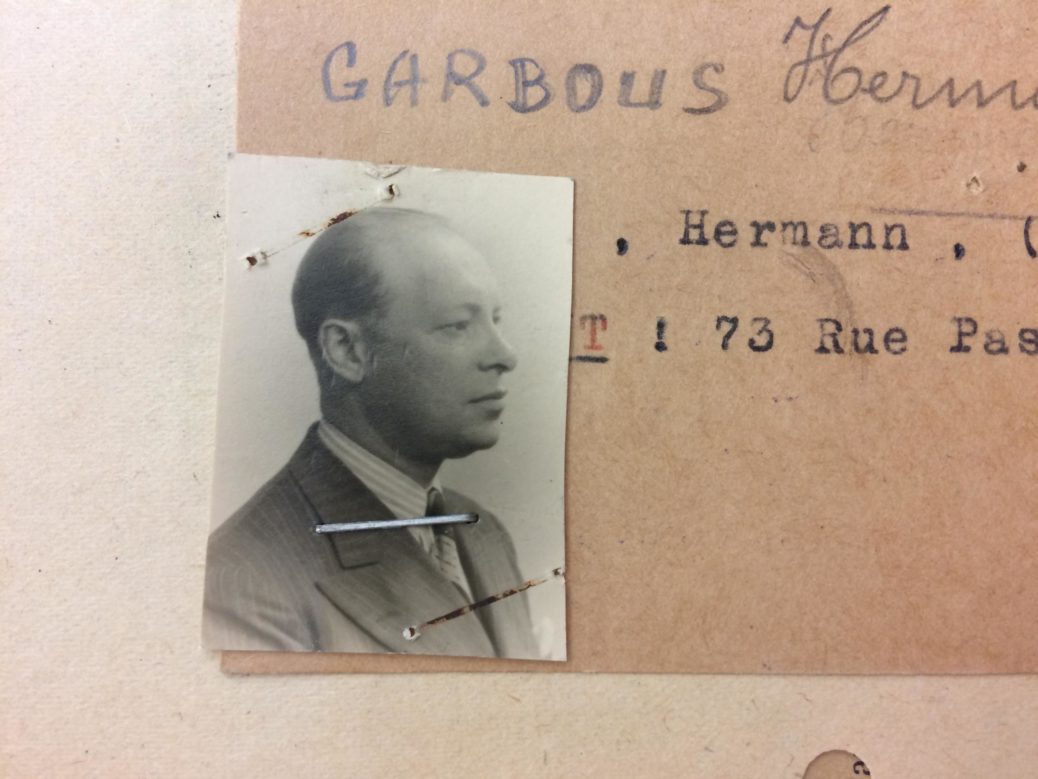 The photo on the left is from the Victims of Contemporary Conflicts Archives Division of the Ministry of Defense Historical Service, in Caen, dossier N° 21P453 465.

A free and happy life

Hermann Garbous, the son of Rosa Kortsarz and Leib Garbous, was born on December 17, 1893 in Wegrow, Masovian Voivodeship, Poland. He was one of the last Jews deported from Drancy camp to the Auschwitz-Birkenau extermination camp on Convoy 77.

Nevertheless, before experiencing such horror, Hermann had also experienced love. On April 16, 1935 at 11:15 a.m. in the 11th district of Paris he had married Marguerite Claire Barbon, who was born in Quincy-Voisins on September 6, 1891. She was the daughter of Eugène Frédéric Barbon and Marie Louise Aubry.

Marguerite had been divorced from Joseph Casanova.

A marriage contract was drawn up on April 15, 1935 by Maître Thion de la Chaume, a Paris lawyer. 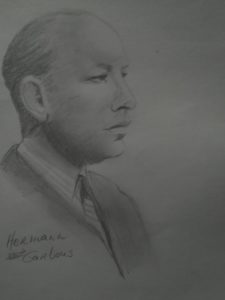 From a man to a number…

Hermann Garbous had been living at 73, rue Pasteur in Quincy-Voisins since 1930.

It was on October 21, 1942[1] that he was arrested by the Feldgendarmerie (German military police)[2], the French Gendarmerie and the State Police.

The testimonial of Mr. André Ganne [3], a 47-year-old garage owner, who witnessed the arrest of Hermann Garbous, confirms this. He stated that Mr. Garbous was put into a French Renault truck and that a number Feldgendarmes were involved.

In another testimonial, dated January 21, 1952, made by Mr. Lucien Dagro[4], who was 62 and unemployed at the time he made the statement, we learn that he had been the driver of the truck that took away Hermann Garbous. He had worked as a driver for a cooperative in Brie and was requisitioned twice a week by the Germans. On October 20, 1942, he was told to make himself available to the German Feldgendarmerie in Meaux at 5 a.m. the following day, October 21. He also said that four Feldgendarmes were present, that first they went to Meaux to arrest a Jewish woman, and then to Nanteuil-les-Meaux, where about ten men were forced to get into the truck.

Two Feldgendarmes travelled in the back of the truck and the other two in front with him. Lastly, they went to Quincy-Voisins to pick up Hermann Garbous. All of the people arrested were taken to Melun.

In fact, a round-up took place on October 21, 1942 in the Seine-et-Marne department with the aim of arresting foreign Jews. 81 Jews were targeted[5]. We also know that Dr. Iancu Vexler and his wife Fajga were arrested in Saint-Cyr-sur-Morin during this raid.

The trail of Hermann Garbous then goes cold until March 1943.

According to Marguerite Garbous’ witness statement, Hermann was then transferred to Beaune-la-Rolande[6], along with hundreds of other partners of non-Jewish women, on March 9, 1943.

On July 12, 1943, they were sent en masse to Drancy camp[7], on Aloïs Brunner’s instructions[8] but they only stayed there for three days.

Hermann was then transferred on July 15, 1943, along with his comrades, to Alderney, an island in the English channel,[9] which had been occupied by the Germans since July 2, 1940. Camp No. 2, was for “Jewish husbands of Aryan women,” explained Benoît Luc[10],  who were used as forced laborers for Organisation Todt[11]. According to Benoît Luc “they were not Jewish enough to be deported to Auschwitz but too Jewish to be left in peace.”

However, on April 1, 1944, Hermann Garbous was sent back to Paris to be interned (and perhaps treated) at the Rothschild Hospice[12], on rue de Picpus. The hospice was then an annex of Drancy. Many other Jewish prisoners from Alderney arrived there in May 1944.

On July 15, 1944, Aloïs Brunner, who wanted to deport as many Jews as possible from Paris before the Liberation, took over the hospice and transferred 28 of its occupants, including Hermann Garbous, to Drancy.

He spent a short while in detention in Drancy camp before being deported on July 31, 1944 to Auschwitz-Birkenau[13] on the last convoy, Convoy 77[14].

Hermann Garbous was murdered as soon as he arrived in Auschwitz, probably on August 2, 1944. 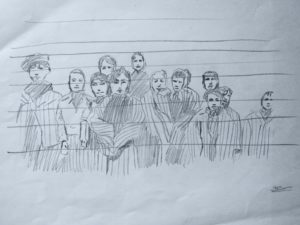 During the selection process, he was not “lucky” enough to be chosen for work.

As early as July 1946, Hermann’s wife, Marguerite Garbous, requested that he be officially acknowledged as a non-returnee[15]. At the same time, Hermann Garbous was recognized as having been a victim of racial deportation..

Officially, the disappeared person’s certificate was signed and published on November 1, 1946.

The paperwork did not stop there, however. On October 26, 1951, the Ministry of Veterans and Victims of War received a request from Mrs. Garbous for her late husband to be accorded the title of political deportee.

The Ministry of Veterans and Victims of War then began an investigation into the circumstances of her husband’s arrest and disappearance. Several documents testify to this, including records of witness interviews carried out by the gendarmes in Meaux on January 17, 1952 and January 21, 1952[17].

At around the same time that Hermann was granted the title of political deportee, Margeurite Garbous sent a letter dated March 10, 1952, via an attorney called Pierre Eveno, to the Director of Litigation at the Civil Registry Office to request a certificate deeming Hermann Garbous presumed dead. She needed this before she could deal with her husband’s estate and the distribution of the couple’s assets.

This request could not be granted, however, since the deceased was a Polish national[18]. The Civil Status Department of the Ministry of Veterans and Victims of War thus suggested that she file a request with the court in Meaux.

It thus took eleven years from when Hermann Garbous died for his death to be recorded, on January 10, 1955, in the civil register at Quincy-Voisins! Mr. Hermann Garbous, son of Rosa Kortzarz and Leib Garbous and husband of Marguerite Claire Barbon was officially declared never to have returned home: “Mr. Garbous has not returned to his home since October 21, 1942”.

A fundamental duty to remember

Hermann Garbous met a tragic end during the war. He was arrested in his home town of Quincy-Voisins on October 21, 1942. He was interned, and then sent to Drancy on July 17, 1944. His final journey took him back to Poland, and there he was murdered as soon as he arrived. His only “crime”: being born a Jew! He was one of the last people to be deported from France during the Second World War. We owe it to ourselves to keep his memory alive and ensure that he is never forgotten. It is our duty to pay homage to all those who unfortunately lost their lives and to remember that tolerance is one of the essential elements for the future of humanity.

We owe it to ourselves to remember and honor each and every person who died. In this case, it is Mr. Hermann Garbous, rather than the non-returnee number 20.282, issued by the Ministry of Veterans and Victims of War or political deportee number 11.01.06051 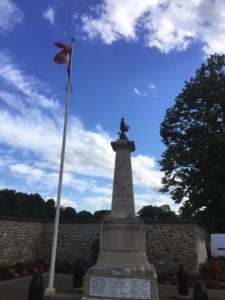 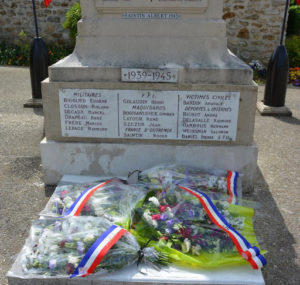 The War Memorial in Quincy-Voisins, overall and detailed views

2 The Feldgendarmerie was the name of the German military police. During the war, a number of Feldgendarmerie units were in charge of the occupation on behalf of the Wehrmacht.

3 Witness testimony of Mr. André Ganne, who was present at the time of the arrest of Hermann Garbous. Deposition dated January 17, 1952 to the National Gendarmerie, mandated by the Interdepartmental Director of Veterans and Victims of War in Paris to conduct an investigation in order to obtain information on the arrest and disappearance of Hermann Garbous.

[4] The driver of the truck that transported the foreign Jews when Hermann Garbous was arrested. Witness testimony of January 18, 1952 collected by the National Gendarmerie, mandated by the Interdepartmental Director of Veterans and Victims of War in Paris to carry out an investigation in order to obtain information on the arrest and disappearance of Hermann Garbous.

[6] Beaune-la-Rolande was an internment camp located in the municipality of Beaune-la-Rolande in the Loiret department. Built in 1939 to lock up future German prisoners of war from the Second World War, this camp was later used by the Germans. It was closed in July 1943 by Aloïs Brunner and the internees were transferred to Drancy.

[7] Drancy was used as an internment camp and assembly center for Jews from France before they were sent to concentration camps and killing centers. Nearly 63,000 of them were deported from Drancy.

[9] Alderney was occupied by the Germans on 2 July 1940. It is one of the Channel Islands. During the war the island hosted up to 5,000 deportees.

[10] Benoit Luc, from the Memory at the Veterans’ Office in Alderney, article in the Ouest France newspaper, May 11, 2014.

[11] Organisation Todt was a civil and military engineering group of the Third Reich.  It was named after its founder Fritz Todt, who was an engineer and an important figure in the Nazi movement. The organization was responsible for almost all major civil engineering operations during the war. It used prisoners and deportees as forced labor.

[12] During the Second World War, the establishment was placed under a management approved by the Nazi authorities and became a de facto detention center for sick Jews before they were sent to a concentration camp.

[13] Auschwitz-Birkenau is a large concentration camp and killing center in Poland. More than 1.1 million Jews were murdered there.

[16] According to the law of 22 September 1942 and the Algiers Ordinance of 5 April 1944, Mrs. Garbous could, by sending a letter to the Public Prosecutor of the place of residence of the ‘disappeared person’, obtain a judgment declaring his or her absence. After five years, starting from the day of Mr. Garbous’ disappearance, his widow was entitled to obtain a declaratory judgment of death.

[18] A decree of November 30, 1945, which amended the provisions of the Civil Code, was not applicable to foreigners unless the foreigner died on French territory. 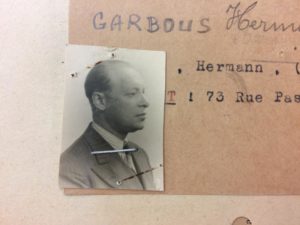