Hermann Spatz, born on February 3, 1912, lived in his hometown of Essen. In 1939, he was interned in Dachau, but then released on the basis of a falsified Cuban visa. 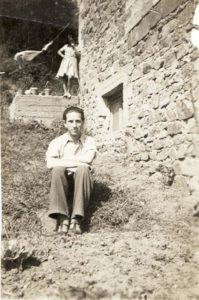 He then left for Belgium, where he was arrested and sent to the Gurs camp in the Pyrénées-Atlantiques department of France. He managed to escape from there and went to stay with family in Lyon, in the Rhone department. In the summer of 1944, betrayed by his accent, he was arrested in the street by a militiaman and sent to Montluc prison. He was then transferred to Drancy and deported to Auschwitz on July 31, 1944 on Convoy No. 77.

We found the following information in the two Gestapo files on Hermann Spatz, as well as in that of the Essen Prison.

From the age of six to fourteen, he went to the Jewish elementary school at In Essen, where he finished his schooling “successfully”. According to the Gestapo records, he was then hired as an “apprentice” with a company called Rottman (branch unknown) at Gelsenkirchen, about six miles from Essen. When he finished his apprenticeship, he became a salesman for the Essen-based company Franck & Cie, where he remained until July 1931.He was then 19 years old.
Next, until December 1936, he worked in Leipzig, Frankfurt am Main and Chemnitz, all in Germany, as a salesman for the company Fobeier. From there, he became an independent sales representative in Essen, described himself as a Jew and held German nationality (c.f. Gestapo records RW 58 N 7301 and N 51786 paragraph Bl. 12).

For the period June 15, 1937 through November 11, 1938, we were unable to find and were not given any information that might offer any insights into events in Hermann Spatz’ life. However, two days after Kristallnacht, also known as the Night of Broken Glass, on November 11, 1938, Hermann was arrested (we do not know where) because he was suspected of being involved in the murder of Ernst von Rath, a diplomat at the German Embassy.

On November 14, 1938, he learned of the death of his mother, who was to be buried at 1pm at the Jewish cemetery in the Segeroth district of Essen. Hermann was therefore authorized to travel to Essen to attend the ceremony. He was then deported, on November 16 1938, to Dachau. He was finally released November 23, 1938.

On December 12, 1938, the Gestapo received a letter from Abraham Spatz, Hermann’s father. “In a letter to the Cuban Consulate in Lyon, it has been requested that the Jewish prisoner Hermann Spatz, who is imprisoned there, be immediately granted a visa to enter Cuba upon presentation of a valid passport.” This information is a little confusing, unfortunately, because in the letter the prisoner’s father requests his release, even though he was no longer a prisoner by then. We also have no information about his possible trip to Cuba.

According to a Gestapo record dated February 7, 1939, Hermann Spatz fled to England, although he first went to Brussels, in Belgium, (we do not know when) and by the beginning of 1940, was in Auvers.

On April 29, 1940, Hermann Spatz applied for a passport, but on June 7, 1940, the Gestapo refused to issue one. Around this time (date unknown), after having been arrested in Lyon (date unknown), and having passed through Montluc Prison (dates unknown), Hermann Spatz was transferred to Drancy, a transit camp, on July 24, 1944, this time on the grounds of race, according to the official Drancy file.

He was then deported to Auschwitz on July 31, 1944 on Convoy 77, until forced to take part in the Death March to Dachau (date unknown), and finally transferred again, on January 28, 1945, the day that Dachau was liberated, to Mühldorf, a secondary camp. According to Gestapo records, he was released between May 1 and 2, 1945, but according to his family’s accounts and the Shoah Memorial archives, he died during the period of his deportation.

11th grade students at the Cité Scolaire Internationale high school in Lyon, under the guidance of their history and geography teacher, Frédéric Fouletier.