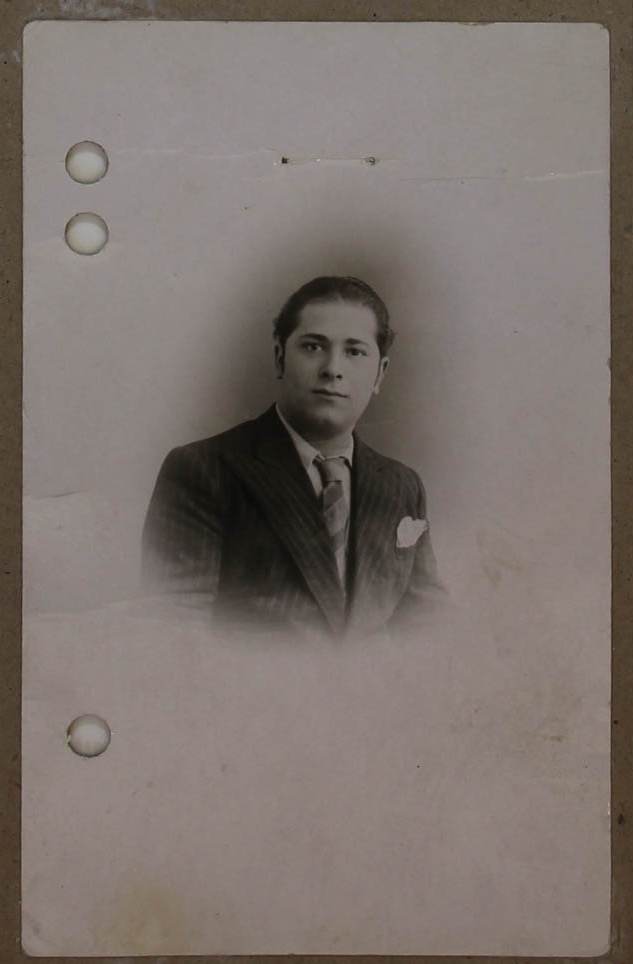 written by Vincent SZUKALA, a student working for his Master of Archive Science Degree 2017-2018, under the direction of Professor Marie-Anne MATARD-BONUCCI, Université Paris 8, Vincennes-St Denis. This biography may be revised after a director’s review.

Jacob Freidine was born on January 11, 1914 in the fourth district of Paris. He was the son of Meyer Freidine (born in Tchernigoff, Russia [now Tchernihiv, Ukraine] on November 29, 1881) and of Anna Guerskovitz.

The Freidine family lived at n° 18 rue du Roi de Sicile in Paris’s fourth district. His father was a peddler who sold antiques and bric-à-brac. He went out of business in 1940 because he had no shop and was selling in the market without a license. He was forced to give up his peddler’s badge and was struck from the trade register, compelling him to liquidate his business. His mother made caps.

Jacob Freidine had brown hair and eyes, a straight nose, weighed 90 kilos (198 pounds) at 1 meter 64 (5 foot 4), and worked in trade, according to his military service file.  On March 14, 1934 he was temporarily excluded from military service because of obesity and high blood pressure. After the war, on November 6, 1946 the Paris conscription board exempted  him permanently.

On August 20, 1941 he was arrested at his home at n° 18 rue du Roi de Sicile during the second roundup of Jews in 1941, this time including all Jews, whether foreign or French. He was interned in the Drancy camp, which had just been “inaugurated”. He was freed on January 8, 1943. During his imprisonment he worked as an employee in the Jewish orphanage of la Varenne Saint Hilaire, which mainly took in the children whose parents had been deported. This orphanage depended on the UGIF (General Union of the Israelites of France). His liberation was presumably related to this professional activity. As the UGIF worked for the German administration, it is likely that he was released for that reason.

He was again arrested by Captain Brunner (an SS officer) in a roundup at the la Varenne Saint Hilaire orphanage on July 23, 1944 along with the orphanage’s children and interned once more in the Drancy camp. He was deported to Auschwitz in convoy 77 on July 31, 1944, arriving there on August 4th. He was given the I.D. number B-3759. He was liberated from the camp by the Russians on January 27, 1945 and repatriated to France on June 13, 1945.

While imprisoned at Auschwitz, according to the testimony1 of the deportee Marco Aron, who was with him there, Jacob Freidine was no doubt subjected to so-called medical experiments in the camps that must have weakened him considerably. Marco Aron describes him as “a man devoted to his fellow prisoners”, and he is said to have conducted himself as a “true patriot”.

On March 30, 1946 he married Esther Bercovici in the fourth district of Paris. They lived at n° 33 rue du Pré Saint Gervais in Paris’s 19th district.

Esther Bercovici was born on March 28, 1911. She was employed part-time at the Departmental Bureau for Veterans and War Victims.

In 1955 Jacob Freidine petitioned the Ministry of Veterans and War Victims for recognition as a political deportee, which he was granted the same year.

In that year he drew an indemnity of 60,000 francs for the loss of his possessions as a deportee.

Starting on May 10, 1955 Jacob Freidine was given a 100% disability pension for the experiments he underwent during his stay in Auschwitz. From 1954 Jacob Freidine was frequently ill and worked only intermittently as Director of the Repatriated Deportees.

On February 1, 1965 Jacob Freidine was attributed the mention “Died for France” by the Ministry for Veterans and War Victims.

1.Testimony among the enclosed documents in Esther Freidine’s letter to the Ministry of Veterans and War Victims