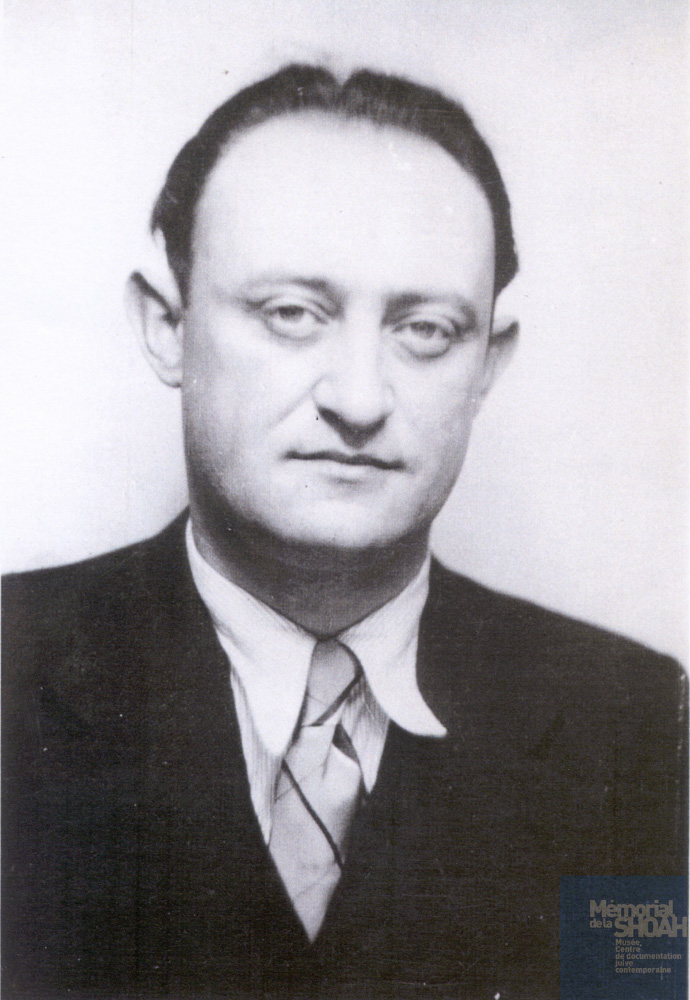 His father was Jacob KAHN; his mother was Sophie née STERN.

Walter had an older sister Herta, born in 1904.

From 1923 to July 31, 1934 he worked at several jobs in the clothing industry, first at Neunkirschen, then at Frankfurt (Germany), and finally at Sarrebruck.

After frequent stints in France as a traveling salesman, Walter immigrated on August 30, 1934, before the referendum of January 13, 1935, in which the Saarland voted to unite with Nazi Germany.

Before coming to France he requested French citizenship, but his request was left pending.

During the summer of 1934 he attended courses for foreign students to improve his French at the University of Grenoble.

From November 6, 1934 to May 8, 1936 he worked as a trainee for the Société Roubaisienne des Grands Bazars Modernes or for UNIFIX in Roubaix, a family run business.

On May 8, 1936 Walter KAHN became director of the UNIFIX company, an important retailer of various manufactured products that employed 62 people. This company, considered Jewish, was “aryanized” at the start of the war.

On May 8, 1935 in la Madeleine (near Lille) he married Marthe née HANAU, who was born on January 14, 1907 in Fraulautern (Saaarland). She held French citizenship, recovered under the terms of the peace treaty of June 28, 1919.

On May 1, 1937 his son Claude was born in Roubaix, where he was declared to be a French citizen by the Roubaix Justice of the Peace.

From the outbreak of the war on September 16, Walter KAHN, as a refugee from the Saarland, volunteered for the duration of the war at the French army recruitment office in Lille in order to be allowed to enlist in the French military.

His request to be admitted to active duty was rejected, but on February 3, 1940 the army nevertheless declared him to be “apt for service”. This obliged foreigners with refugee status to carry out community service as a manual laborer under the auspices of the army.

He resided with his wife and son at Croix in the Nord department until May 24, 1940, when he left for Limoges (Haute-Vienne department).

In accordance with the military instructions he had received, Walter KAHN reported to the Braconne work camp near Brie-en-Charente, where he remained until it was closed down a few days before the armistice on June 22, 1940.

After being demobilized, Walter KAHN joined his wife and son in Limoges and lived with his sister-in-law, Gertrude MICHEL and his father-in-law, Ferdinand HANAU. In 1941 he assisted his sister-in-law in setting up the “Maison Duchesse” to produce fruit-flavored candies, working as a confectioner.

In 1942, fleeing from increasing danger, as the arrest of Jews was ever more frequent in Limoges, Walter KAHN took his wife and son to Lyon in the Free Zone. The hid in an attic garret at n° 26 rue Sala, under the false name of RAHN.

He worked for while in a metallurgy factory under the false name of Albert RAHN.

On July 3, 1944 while on a walk on the Place Bellecour in downtown Lyon, Marthe and her son watched as two militiamen arrested Walter KAHN.

His wife Marthe was arrested in Lyon later the same day in circumstances that are not known, after succeeding in entrusting her son to the care of her grocers, Jean and Emilienne GOUTARET.

He managed to send a French Red Cross postcard (exceptionally for a Jew) to his landlord, requesting him to send him a suitcase with his most basic affairs.

On July 25, 1944 Walter and Marthe KAHN were transferred to the holding camp at Drancy.

Walter KAHN and his wife Marthe were deported on July 31, 1944 in convoy 77 that took 1300 prisoners to the concentration camp at Auschwitz, arriving probably on August 3, 1944.

According to the State Museum of Auschwitz-Birkenau, the camp’s records do not disclose Walter and Marthe KAHN’s precise fate, but both are known to have died at Auschwitz.

After the war, in 1948, the Lyon Civil Court declared that Walter KAHN died at Auschwitz on August 5, 1944.

Walter was 39 years old and Marthe was 37. They left their son Claude an orphan at the age of 7…

Claude KAHN survived and was taken in by Gertrude MICHEL, his mother’s sister, and her husband, André MICHEL, and brought up with their two sons.

Claude was adopted as a war orphan and ward of the state, whose mother and father had officially “Died for France”, in a court decision on April 19, 1950.

Claude KAHN became a pediatrician and married Nadine née FINKELSZTEJN on July 4, 1963 in Nancy. They had three daughters: Myriam, Ariella and Dvorah.

The family accomplished their Alyah, immigrating to Israel on August 7, 1979, where they are now living in Herzliya. The family has grown to include 11 grandchildren.

It has turned out that Marthe KAHN’s husband Walter was denounced as a Jew by a colleague at work, who also confessed to informing on others. He was executed at the Liberation. This information comes from a member of the Resistance.

In the garret next to the family KAHN’s in Lyon lived a couple, M. and Mme Gilbert PUT, who were deaf and dumb. They witnessed Marthe KAHN’s return after her arrest, accompanied by militiamen to search the premises.

By hiding little 7-year-old Claude, Emilienne and Jean GOUTARET had put themselves in double jeopardy, as he was an escaped war prisoner.

Finally on November 19, 2012 St. Wendel honored Walter KAHN by embedding a stone marker with his name engraved on it in the ground near his last known residence there at Brühlstrasse 9.