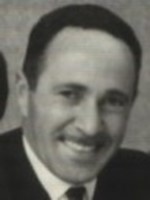 Kurt Siegfried Hagenauer was born on December 26, 1921 in Karlsruhe, Germany. His family was Jewish. He was the son of Hermann Hagenauer (born on October 6, 1889 in Weingarten, Germany[1]) and Rosa Hagenauer (née Dreyfus)[2]. He was the couple’s only child. In 1932, Kurt started elementary school. Later he attended the Goethe Realgymnasium high school. The year 1936 was a year of great change for the Hagenauers as the whole family moved to the French city of Strasbourg. Their surnames were converted to French when they applied for French passports: Hermann became “Armand” and Kurt Siegfried became “Claude”. The family name was also changed to the French spelling of “Haguenauer”.

In 1939, when the Second World War began, the Haguenauer family took refuge in Lyon, where, during the German occupation, Mrs. Olga Galenon and her husband Mr. Louis Petitpierre hid the Haguenauers in their flat at 78, Avenue de Saxe. They then found a room for the family at 25, Rue de la Ruche in Lyon in March 1944.[4]
While in Lyon, Claude worked as a plumber in the company “Bernard et Cie”, based at 15 Place Carnot, which enabled him to support his parents financially. The employees were then requisitioned by the Germans to work on the Bron airfield. For three weeks, in March and April 1944, Claude went to work with a false identity card and had to undergo numerous identity checks. Fearing that he would be found out, Claude then stopped going to work.[5]
On June 24, 1944, around 7pm, Claude was arrested by two Gestapo agents[6], while he was at a restaurant at 21 Rue Porte du Temple in Lyon[7], with two of his friends, a Mr. Flacsu, who was Jewish[8], and a Dr. Fischer. The Gestapo claimed that he was guilty of acts of resistance and sabotage at his workplace, the Bron airfield, which he formally denied.
On June 26, 1944, at around noon, Hermann Haguenauer was arrested in his room. Mrs. Haguenauer did not return home because she noticed a black car parked in front of the house and suspected that it was the Gestapo. She therefore tried to hide in Louis Petitpierre’s workshop at 16, Rue de la Ruche. Olga Ganelon saw Rosa Haguenauer arrive, took her inside and hid her before going out to the entrance of the workshop. By this time, the black car had moved and was now facing her, with five people inside, including Mr. Haguenauer. Olga wanted to go back into the workshop but was stopped and questioned by another man who asked her about her relationship with Mrs. Haguenauer. Olga denied knowing Mrs. Haguenauer. The man became angry but suddenly left, although he could have had the building searched. Later on, Olga discovered that Claude had also been arrested two days before his father. Both men were subsequently interned in the Montluc prison in Lyon.[9] [10]
The official reason for the arrests was given as resistance activity. Olga, however, even years later, remained convinced that the real reason behind the arrest of the Haguenauer family was the fact that had been denounced for being Jewish.[11]

In Montluc prison, Hermann and Claude met up with their old friends Isidore Fischer and Roland Flacsu. Following an illness, Hermann Haguenauer had to have one of his arms amputated. In 1939, while working, Hermann contracted a phlegmon, a festering inflammation. At that time, when antibiotics were unavailable, the inflammation worsened to such an extent that his left arm had to be amputated.[12]

Every day for eight days, Claude was taken to the Gestapo headquarters at Place Bellecour in Lyon, where he was questioned about sabotage at the Bron airfield, but he was never questioned about his background or religion. His registration number was 24.768. He was transferred out of Montluc prison on July 1, 1944.[13]
On July 3, 1944, he arrived at the Drancy camp, north of Paris,[14] together with his father, Mr. Flacsu and Mr. Fischer. Drancy was known as the “Jewish” camp because it was a gathering place for prisoners prior to their deportation. During his time there, Claude sent a letter to Olga Galenon to tell her where he was being held.[15] Although the liberation of France by the Allies had begun on June 6, 1944, the four men, along with many others, were sent to the Auschwitz-Birkenau camp on July 31, 1944.[16]

On August 2, 1944, Claude, his father and his two friends arrived at the Auschwitz-Birkenau camp, where the prisoners were sorted into groups during a process known as the selection. Claude was separated from his father and never saw him again. Before he disappeared, Hermann Hagenauer explained that he had never been questioned by the Gestapo and therefore did not know the reasons for his arrest. The registers state that there was “no news” about him[17]
As for Claude, he and Isodore Fischer were selected for work, groundworks to be exact. Claude then continued to work alone when Mr. Fischer was transferred to West Prussia on October 26, 1944.[18] He later took part in the “death march”. As for Mr. M Flacsu, we know that he stayed for a time in Auschwitz-Birkenau but we have no further information about him. In any case, both of his friends survived the war.[19]

On January 18, 1945, Claude was transferred to the Mauthausen camp[20] for a short time and then transferred again on February 16, 1945 to the Gusen II camp.[21][22]
On May 6, 1945, Claude was liberated by American troops[23] and was repatriated to France on June 24, 1945.
Claude Haguenauer settled in Lyon, where he lived at 52, rue Laënnec, and became a director of a plumbing and installation company.[24]
He then met married Hannelore Annette Haguenauer (née Trautmann) from Karlsruhe (1923 – 2013), the daughter of Emilie Trautmann, who was murdered in Auschwitz in 1942, and Artur Simon.[25] The couple later married.
Claude met up with Isidore Fischer again after the liberation.[26] Mr. Flacsu also survived and, in 1952, testified on behalf of his old friend Claude.

Although the Second World War ended on May 8, 1945, it was not until 6 years later that Claude Haguenauer was reinstated as a French citizen. The Justice of the Peace in the 9th district of Lyon issued him a certificate of nationality on November 14, 1951.
During 1952, several trials took place, during which Claude Haguenauer was called to testify, as were Mr. Flacsu and Mr. Fischer.[27] Claude confirmed that he had never committed any illegal acts that would have justified his deportation. As a result of this explanation, the departmental commission approved his statement.[28] His request for compensation was made on July 15, 1960 and his father’s was made on September 17, 1962.[29] On January 31, 1964, the Ministry of Veterans and Victims of War decided to grant him the title of political deportee.
Claude died in Lyon at the age of 63 on November 22, 1985.[30]

Kurt was born in Karlsruhe, Germany
He died in Lyon, France