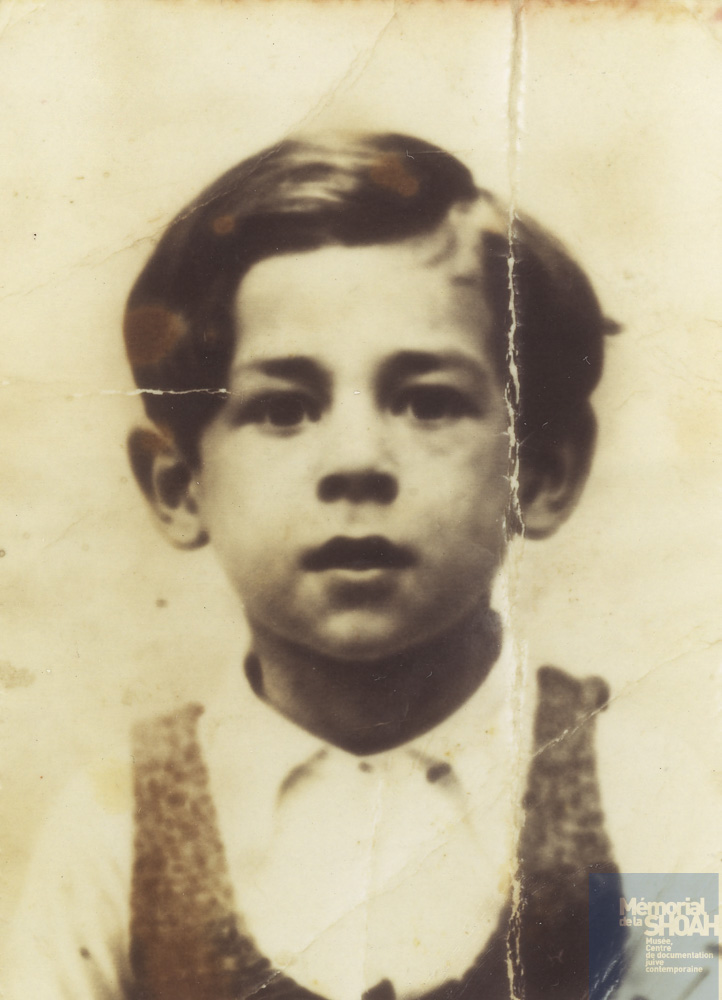 Isidore was born on February 20, 1934 in the 12th district of Paris1, of French nationality. His parents, Fayga Trzcinka2, born in Warsaw on April 5, 1904, and Isaak Laks, born in Lipsk on October 21, 1897, both immigrated to France in the 1920’s. It is in Paris that they met and, having no valid papers, were married only in the synagogue. This in no way prevented Isaak Laks from recognizing his children legally.

In Poland Isaak Laks had been a cobbler, but in France he earned his living by knitting. Fayga was a seamstress. Until the birth of Henri they lived on the rue Bisson near Belleville Park in the 20th district of Paris; then they made a first move to the rue des Trois Bornes in the Folie-Méricourt neighborhood of the 11th district.

In 1940 the family settled in an apartment belonging to the City of Paris’s Housing Authority on the recently created rue Louis-Ganne in the 20th. Isaak applied to join the French army3. Deprived of his Polish citizenship, he lodged a request with the Paris Police Department for the exchange of his Polish I.D. card for a card bearing the mention « of undetermined nationality », indispensable for him to be taken into the Foreign Legion. This new I.D. card was delivered to him for three years, but he seems not to have ever been enlisted. The armistice was signed on June 22nd.

In 1942 Maurice, and most probably Henri, were sent to foster care in Chavagnes-en-Paillers (Vendée) and enrolled in school in March4. Paulette joined them in June. Only Isidore remained at home with his parents in Paris. He was 8 years old when the Vel d’hiv roundup took place on July 16, 1942. The French police arrested his father, detained him at Drancy5 and deported him to Auschwitz on July 24, 1942 in convoy n° 106. Issac died there of nephritis on September 27, 19427. Isidore and his mother eluded arrest. Fayga found herself alone with her son. Did she decide to place Isidore in foster care in Roye (Picardy), or was it on the proposal of the social services? At any rate, he was most likely there from the month of August, whereas Fayga left to be with her other children in Chavagnes-en-Paillers. There she remained until October 1942, when the municipality forced her to leave town, considering her presence a danger to the many children concealed in the community. She came back to Paris and hid at a friend’s. Isidore was still in Roye; his turbulent behavior upset his childminder and worried his mother. She therefore decided to send Paulette to be with him in Picardy. Isidore was reunited with his 13-year-old sister in the autumn of 1942.

On December 5th Fayga was arrested and detained at Drancy8. She wrote several letters to her sister Sarah, who was living with her whole family in Paris9. She asked for her help, especially to take care of her children.

1943 : Isidore lived with his sister in Roye. He was a turbulent child, often punished and deprived of food. Paulette secretly gave him chocolate that she had obtained with her rations card, depriving herself for him. Together they went into the woods to pick lily-of-the-valley, which they sold to buy themselves waffles.

Fayga was deported to Auschwitz on February 9, 1943 in convoy n° 4610. Isidore, though unaware of it, was now an orphan. This event must have ended payments to the foster homes for board and lodging. All the children were brought back to Paris by the social services.

Henri, who was unwell, was registered with the UGIF (General Union of French Israelites), rue Lamarck11, on September 8. He was taken in and hidden by a family for the duration of the war. Paulette was taken under the care of the OSE (child relief charity organization)12, which sent her immediately to a foster home in Brou (Eure-et-Loire), along with Maurice, apparently enrolled in school there from October 1813. Isidore is recorded by the UGIF as “inducted” into its center on October 814. From that moment he was alone in Paris, and his name appears on the lists of “sequestered children” listed by the intelligence service (SD) of the SS. These children were officially interned with their parents at Drancy, but were in fact given over to the UGIF for placement in children’s asylums or in private Jewish or non-Jewish homes. Their whereabouts were thus known to the Drancy authorities. We have as yet been unable to determine why Isidore appears on these lists. Was it perhaps because he was an isolated child?

1944 : On February 23rd a major roundup was organized at Brou, which was eluded by Paulette and Maurice. Isidore was still on the rue Lamarck. However, the Center had to move after being destroyed by allied bombing on April 20-21. In May the UGIF requisitioned the Lucien-de-Hirsch school building situated at 28 avenue Secrétan to relocate all the « sequestered/isolated » children. Maurice remained in Brou until the end of the war. Aunt Sarah fetched Paulette, possibly relocated to the Secrétan site, and lodged her in her home. The turbulent boy Isidore remained on the avenue Secrétan. Paulette went to see him every Sunday and took him for walks in Paris.

On July 24, 1944, on the orders of Aloïs Brunner, the children entrusted to the UGIF were rounded up by the French military police. Isidore was arrested with the 109 children and teachers at the Lucien-de-Hirsch school. He was interned at Drancy15, whence he was deported on July 31, 1944 in convoy 7716, which arrived at Auschwitz on the 3rd or the 5th of August17. Almost all the children were murdered upon arrival.

[12] OSE : Œuvre de secours aux enfants (Child relief charity organization). Established in 1912 in Saint-Petersburg for the rescue of Jewish children, this association was to do its utmost to protect and save children during the Second World War and took charge of more than 2000 orphans when the war was over.

[13] Letter from Yves Bernard, a child at Brou