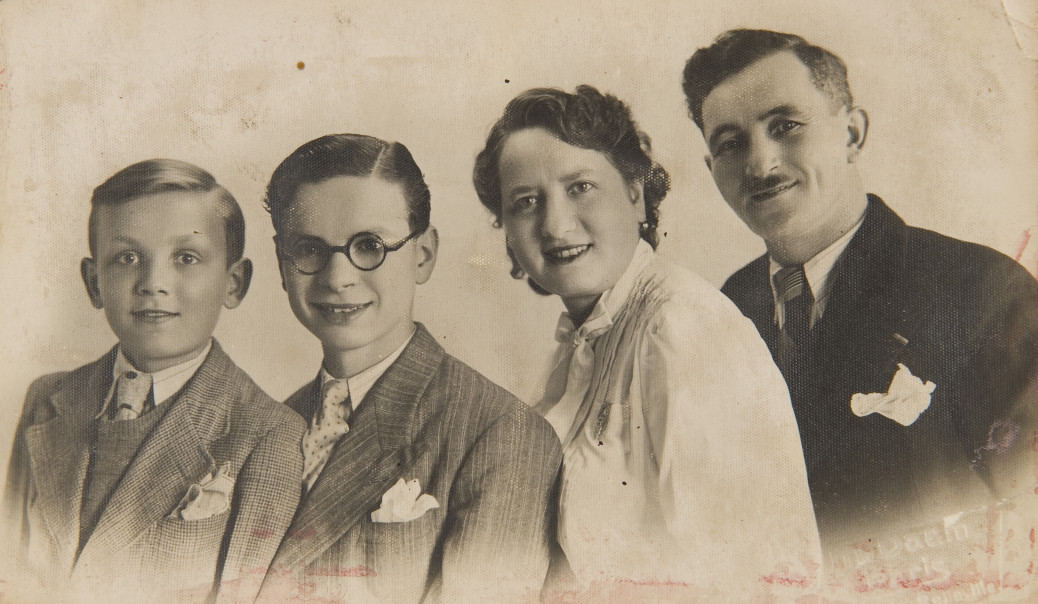 This biography of Sinisia Ruben, also called Robert, the eldest son of the Lask family, has drawn on the one produced for the family by the students of Nathalie Menoret at the Lakanal middle school in Sceaux. Despite the inclusion of new information, there are still many gaps.

When convoy 77 pulled out of Bobigny station on July 31, 1944, it carried off to Auschwitz a French Jewish family of Polish origin, the Lasks —Isacher, Chana and their two son, Joseph and Robert respectively 20 and 16 years of age.

None of them were to come back alive.

Sinisia, or Ruben, or Robert (it was the fashion for young immigrants who wished to integrate to gallicize their first names) was born in Poland in 1924 into the family home of his mother, Chana Faigla. His grandparents were bakers in the village of Przedborz, around 100 kilometers (60 miles) southeast of Łódź1. The exact date of his birth and the identity of his father require further research. Two years later, on July 5, 1928, Chana gave him a brother, Joseph, in the same village.

Did their mother decide to immigrate to France shortly after Joseph’s birth? Was she already married religiously to Isacher Lask, who gave the two boys his name after their official marriage in France in 1933? Were they born of an earlier union whose trace has been lost? The information is lacking.

What is known is that Robert (the name he chose to use with his schoolmates) must have arrived in Paris between the age of four and six and was enrolled in the school in the Temple neighborhood2 of the 3rd district, where he no doubt learned to speak French with the accent of a Parisian kid. With his family he moved to the Belleville neighborhood, where they lived at several different addresses, (perhaps attending the same schools as his young brother on the rue Ramponneau, and then rue de Tlemcen…). Along with the rest of the family, at the age of 10 Robert was officially granted French citizenship through naturalization3.

His parents worked in the hosiery trade; Chana ran a shop, while Isacher was a stallholder selling lingerie on the open markets. His father had enlisted in the French army in the First World War, and the conflict left him physically impaired, but decorated and allotted a military pension4. This gave the family the impression of being protected, perhaps with a certain prestige. While their life was hardly opulent, the Lasks escaped the abject poverty from which many of their Polish Jewish compatriots suffered in the Belleville area. The family photograph shows the image of a handsome boy with dark hair and glasses, and a smile like his mom’s. Like his brother, he is elegantly dressed, wearing a tie and a pocket handkerchief, most likely in a custom-made suit. On the back of the photo is the inscription “In memory of your sister Lask family, R. Lask 24 April 1941”, indicating that Robert was seventeen at the time. That hardly seems likely, as his face is still marked by childhood, as is his brother’s. The photo, which was sent on that date, was no doubt older5. Is the “R” in the inscription for Robert?

Robert’s schooling is for the time being unknown, but it must have been concluded by professional training, for when he was deported at the age of sixteen, he was listed as a “salaried draftsman”. It is quite doubtful that he was working at that job at the time, as almost all professions had been forbidden to the Jews. He certainly had to contribute to the family’s subsistence after their businesses were shut down and aryanized.

We know that he had at least two cousins living in Paris — Albert (born in 1926) and Georges (born in 1933) Graudens (spelling uncertain), who were arrested with their parents in the Vel d’Hiv roundup and deported to Auschwitz in August, 1942. There was no return.

In 1943 Robert was 19 years old. On his birthday he had his photo taken, in which he is again elegantly dressed in coat and tie. Here he looks completely adult, well-groomed and wearing a cheerful expression. There is a dedication on the back: “With my friendliest wishes on my nineteenth birthday R. Lask.“6

On June 6, 1944 the Allies landed in Normandy and the liberation of the national territory commenced. But this military success did not mean an end to the arrests and deportations. Rather the opposite. The fate of the Lask family bears cruel witness to this.

The circumstances of the Lask family’s arrest were recounted to us by M. Koplewicz, who took got them from an account by his mother.

At the beginning of July, 1944, with the allied troops marching on Paris, the two boys were out for a walk (perhaps on Joseph’s birthday July 5th). They were arrested by the French police, who interrogated them and obtained their address; then all they had to do was go and pick up Isacher and Chana.

The Lasks arrived at Drancy on July 6, 1944. They were duly registered upon their arrival14, and their data sheets were filled out. It was noted that they were still French, and had not been affected by the law of July 22, 1940 that revised the naturalizations granted since 1927 and which made 15,000 people stateless.

In the 1930’s, tenement housing (the cité de la Muette and five high-rise buildings) was built in Drancy as low-rent lodgings. These buildings were eventually turned into the Drancy holding camp, to be known from 1941 as “Drancy la juive” while still under construction. The deportees occupied the horseshoe-shaped building, while the German officers were lodged in the five towers whose height was impressive at the time. That is where the Lask family was to spend its last three weeks on French soil.

After a final roll call on July 31st Isacher, Chana and the boys got on a Paris bus that took them to the Bobigny train station, which had replaced the station at le Bourget for the deportations toward Poland since July 1943. The trains were made up of freight cars. Conditions during the journey were unbearable, without water, without fresh air. Three hundred twenty-one children under the age of sixteen were crammed in with the hundreds of adults and old people that composed convoy 77.8

When they arrived at Auschwitz the Lasks were separated.

Isacher and Chana were not “selected” as they were taken off the train and were thus immediately gassed. They have left no trace in the Auschwitz archives and their date of death published in the Journal Officiel (August 5, 1944) is that of their arrival at the camp.

Joseph and Robert, on the other hand, were admitted into the Birkenau concentration labor camp18. It is comforting to know that their I.D. numbers (numbers B3834 and B3835) are consecutive, which means they were not separated. The numbers were tatooed on their left forearms. On October 28, 1944 Joseph was separated from his brother and transferred to the Stutthof camp10, where he died on January 2, 1945.

Robert arrived at Buchenwald on January 23, 1945 and was registered as number 120150. After several days in the “Little Camp” he was transferred on February 9th to the work camp “kommando Malachyt” at Langenstein-Zwieberge, near Halberstadt. This “kommando” was one of the many subcamps of Buchenwald. Arms were manufactured there in an underground factory. He was put into block 14. On February 16th Robert was admitted to the camp’s infirmary. He died there the following day, officially of pneumonia. He was 21 years old.

Nathalie MENORET and her class at Lakanal High School in Sceaux

Filled out with research done by the historian, Laurence Klejman.

[1] For the notes and information on Chana’s family, cf. her individual biography on this site.

[2] If the address furnished by Chana at her marriage in 1933 is exact, information that is to be considered critically, given that the two spouses needed to declare separate residences in order to meet official marriage criteria.

[4] Cf. Isacher’s biography on this site. Many details on the family will complete Robert’s portrait.

[5] His aunt, Chana’s sister, who miraculously escaped deportation, kept it and transmitted it to her son Michel, who gave it to the Mémorial de la Shoah.

[6] The photo is in the Mémorial de la Shoah, a gift of M.Koplewicz.

[8] Cf. the biographies of Isacher and Chana.