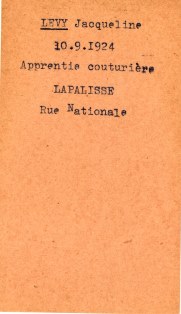 Jacqueline Lévy was born on September 10, 1924 at Quatzenheim in the Alsatian department of the Bas-Rhin. Her father Paul was a livestock trader, and her mother Elvire née BLOCH was a housewife. Jacqueline was an apprentice seamstress. They lived in Strasbourg (Bas-Rhin).
The family left Strasbourg to seek safety in Lapalisse (Allier department), where they resided in the Hôtel de France, Route Nationale.

They were listed as French Jews under the French state’s Anti-Semitic Law of June 2, 1941.

(Source for the list below: Departmental archives of the Allier department 756 W 1)

She was repertoried by the French state in1943 as a French Jew.

(Source of the above document: Departmental archives of the Allier department 996 W 776 W 112)

Jacqueline and her parents were arrested in the roundup in Lapalisse on June 30, 1944 by the Vichy Militia and the Gestapo, and interned in the Mal-Coiffée German military prison in Moulins (Allier department).

Jacqueline died on August 5, 1944 at Auschwitz according to the Quatzenheim public records and the Journal Officiel n° 98 of April 26, 1995.

Note: Her uncle, Henri SAMUEL, and her aunt Palmyre were also arrested in the same roundup. 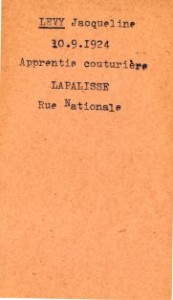