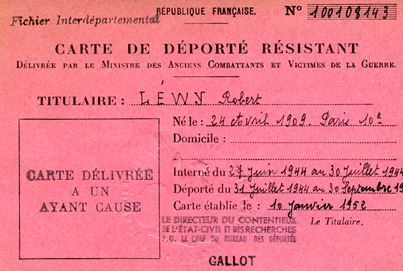 Robert Benoit Édouard Ernest LÉWY was born on April 26, 1909 at his parents’ home at n° 10 rue Taylor in the 10th district of Paris.

His father Albert was a merchant, and his mother Jeanne née CERF was a housewife.

He was a bachelor working as a colonial administrator at Fort-Lamy in Chad. He was living in Fort-Lamy in 1939.

Having returned to Vence (Alpes-Maritimes) in France, he was ousted from the Colonial Administration under the terms of the anti-Jewish laws. He then joined the “Jove” network of the Resistance in June, 1941 as n° 2043 with the code name “Lenoir”.

Reinstated on January 7, 1943 in the staff of the Colonial Administration owing to his service record, he was ordered by his network to return to his administration in Vichy “to carry out the mission of contacting the Resistance movement in that city and in Lyon with the aim of arranging to send a contingent of reserve officers to North Africa”, according to the statement given by Jean Chabert, head of the “Kerdanic” resistance unit in the Vence sector.

He returned to his post as colonial administrator in Vichy (Allier department), where he resided at n° 4 rue de la Porte de France.. He was arrested for being Jewish by the Gestapo in his office in the Ministry of the Colonies in Vichy on June 27, 1944.

He was interned in the Mal-Coiffée German military prison in Moulins (Allier), before being transferred to Drancy on July 15, 1944.

– Section of the Archives of the Victims of Contemporary Conflicts

– Klarsfeld, Serge: List of the transfers from Vichy to Drancy on July 15,