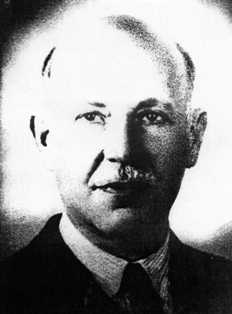 Albert Lubetzki was born on March 30, 1887 at his parents’ home at n° 1 rue Beautreillis in Paris’s 4th district. His father Judas was a rabbi, and his mother Emilie née SCHLOMOWITZ was a housewife.

He married Lucy née LÉVY on November 24, 1925 in the 5th district of Paris, and they had two children, Jacques and Janine.

A 1914-1918 war veteran, Doctor and Commandant in the Paris Garde Mobile Républicaine, he was discharged in 1942, without compensation, on the grounds of being Jewish.
He took his family to seek safety in Nice (Alpes-Maritimes department), where his children were enrolled in school — Jacques in the Lycée Masséna and Janine in the Lycée Calmette.

According to the Billy Municipal Archives the LUBETZKI family arrived in Billy (Allier departpment) on March 15, 1944, and resided on the rue des Remparts.

The family filed a request for a rations card.

(Source for the document below: Billy Municipal Archives)

He and his wife were arrested on June 23, 1944 by the POINSOT Brigade of the French police and then released on the 27th. On June 28th he was summoned with his wife to the offices of the Gestapo and held prisoner.

Jacques and his sister Janine were arrested on July 7th in Billy by the Gestapo and joined their parents in Vichy.

They were first interned in Vichy and then in the Mal-Coiffée German military prison in Moulins (Allier department), and finally transferred on July 14, 1944 to Drancy. Albert LUBETZKI was attributed I.D. n° 25175.

On May 25, 1946 Albert LUBETZKI’s son Jacques wrote the mayor of Billy to request that his family’s names should be inscribed on the Billy War Memorial Monument.

(Document below: Jacques’ letter that reached the Billy Town Hall on May 27, 1946. Source: Billy Municipal Archives)

I have just been informed by the Ministry of War Veterans and Victims that the death certificate of Monsieur Albert LUBETSKI, dossier 3099, has been established and a transcription sent to your Town Hall.

The mention ‘Died for France’ [is] inscribed on the death certificate of a Frenchman who, as a prospective medical student, enlisted at the age of 19 to carry out his military service; who at the age of 27 in 1914 fought all through the war in the front lines and, the recipient of three division citations, was awarded the War Cross with Bar; who served without interruption as a physician in the Reserves from 1919 to 1939; who was named a Knight of the Legion of Honor in 1920, and then an Officer of the Legion of Honor with 32 years of service and 4 campaigns on December 28, 1938; who at the age of 52 in 1939 reported for duty on the first day of this war whose end he was not to see, and who, as Doctor and Commandant of the Paris Republican Guard, remained when the Germans invaded Paris, was disarmed by a Nazi private but stayed at his post until 1942, when he was informed by an order of the Paris military region that he was temporarily suspended without pay, arrested by the Militia, and turned over to the Gestapo with his wife, his 11-year-old daughter, and me.

This mention crowns a life devoted to the love of France, to the service of humanity”.

“Died in deportation” according to the decree of the State Defense Secretariat dated September 16, 2008, published in the Journal Officiel n° 251 of October 26, 2008.

– Our thanks to Henri Breux, town councillor of Billy, for his precious help.