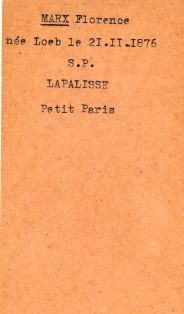 Florence Loeb Marx was born on November 21, 1876 at Niederbronn-les-Bains in the Alsatian department of the Bas-Rhin. She was the daughter of Aron LOEB and Françoise née HEMMERDINGER.
Florence and her husband, Simon Marx, left Strasbourg, where they lived at n° 19 Boulevard Clemenceau, to seek refuge in Lapalisse (Allier department), where they lived in the hamlet of Le Petit Paris. There they were joined by their son Albert.

They were repertoried in Lapalisse as French Jews under the terms of the French state’s Anti-Semitic Law of June 2, 1941.

(Source of the first photo below : Departmental archives of the Allier department 756 W 1)

Her husband Simon was admitted to the Lapalisse Hospital and died there on June 1, 1942.

She was listed in 1943 by the French state as a French Jew.

(Source of the second photo below : Departmental archives of the Allier Department 996 W 778 W 112)

She and her son were arrested in the roundup of June 30, 1944 organized in Lapalisse by the collaborator Georges Jany BATISSIER alias Capitaine SCHMIDT. They were interned at the Mal-Coiffée German military prison in Moulins and transferred on July 15, 1944 to Drancy, where Florence was attributed the I.D. n° 25145.

She died on August 5, 1944 at Auschwitz according the public records of Niederbronn-les-Bains and the Journal Officiel n° 9 of January 11, 1995.

“Died in deportation” according to the decree of the War Veterans Ministry, dated November 10, 1994, published in the Journal Officiel n° 9 of January 11, 1995.