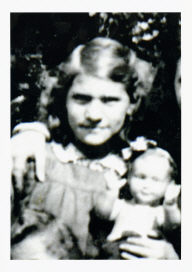 This biography is taken from the project carried out by students in the 10th– and then 11th-grade for a diploma in supportive care and services at the Simone Dounon private Vocational High School in Cosnes-Cours-sur-Loire 58200, under the supervision of Mrs. Marie-Line Gauthier, their history, geography and French teacher. This report is about Mireille and her mother, Sarah, aka Suzanne.

Mireille Rottman born on September 7, 1931 in Paris, was arrested in Bourges (Cher department) and died on August 5, 1944 at Auschwitz.

The faces of Sarah and Mireille were quickly found on the site of the Mémorial of the Shoah. Mother and daughter were constantly a presence in the classroom. They lived with us. We found Sarah’s brother, Albert Rottman, and talked with him on the phone. It was a very moving moment. He lived not very far from the school, an hour away in the Yonne department. We had hoped to meet him, but it proved impossible due to health reasons. However, Madame Soirat, Albert’s daughter and Sarah’s niece, came to us. She was able to tell us more about her aunt. As this family history had long been denied by her parents, certain gray areas still persist. The Rottman family was made up of:

Anna Mintz, married name Rottman, a seamstress, who had fled the pogroms in Riga, Latvia. She had already had two sons in England with her first husband, one of whom perished on the Titanic.

The family lived at n° 23 rue Vieille du temple, as is attested on the daughter Sarah’s birth certificate. The photos of Sarah as a child provided by Mrs. Soirat show her as a communicant, but with no missal in her hands. The family did not practice the Jewish religion, and Sarah called herself Suzanne, which is the name found on her Large Family I.D. card. She either was a pupil at one of the two schools for daughters of people decorated with the Légion d’Honneur, or she is merely wearing one of her relative’s decorations for the photograph.

It is the medal of a knight of the Légion d’Honneur, but we were unable to find out who in the family had received it. We do know that her father was wounded and gassed in World War I.

We were struck by Sarah’s beauty, her bearing. She exudes her zest for life. The Drancy counterfoil receipt of her confiscated affairs gives the sad list of what she was wearing.

This refinement is explained by the fact that she was a seamstress like her mother.

A photograph taken on Saint Catherine’s Day shows her with her friends, in costume for the occasion (indicating that she was at least 25 years old and already a mother). It is possible the picture was taken on November 25, 1939, at the start of the war. Her hat is decorated with seamstress’s scissors. Sarah then lived at n°137 boulevard de l’Hôpital in Paris. Sarah was an unwedded mother, which at that time was an unfortunate situation.

Nevertheless, mother and daughter are posing with the other women of the family, indicating that they had good relationships. During the Occupation Sarah/Suzanne and her daughter lived in Bourges.

Albert, her brother, who was with the Resistance in Châteauroux and Saint-Amand-Montrond, visited her regularly. This photo was perhaps taken in Bourges.

A happy moment when mother and daughter share in the joys of the countryside. Other children are visibly playing with Mireille. She is holding a pretty doll and radiant with happiness.

Then Sarah had to go back to work in Paris, entrusting her little Mireille to the care of a nanny, to whom she paid room and board. Unhappily, when Sarah was arrested the payments stopped and the nanny probably informed on Mireille. The little girl was sent to Drancy, where she was reunited with her mother.

It was Mireille’s grandmother, surviving hidden throughout the war, who declared the deportations. Yad Vashem’s archives in Jerusalem provided us the transportation documents to the Auschwitz camp: The testimonial page for Yad Vashem was established by Xavier Messalati in Israel. No testimonial was found for Mireille.

The Wall of Names at the Mémorial of the Shoah.

Meeting with Serge Jacubert to present our early research

What did the deportees take with them? What did they imagine? We have tried to put ourselves in their shoes. With our vocational teachers we also reflected on the conditions of transportation and dehumanization. On the occasion of our visit to the camp we organized a memorial ceremony for Sarah and Mireille. They will live forever in our memories, and especially in our hearts.

the 10th- and then 11th-grade students for the diploma of care and service provision at the Simone Dounon private vocational high school in Cosne-Cours-sur-Loire 58200, under the direction of Madame Marie-Line Gauthier, their history, geography and French teacher

Are you a teacher?

TAKE PART IN OUR INTERNATIONAL MEETING!