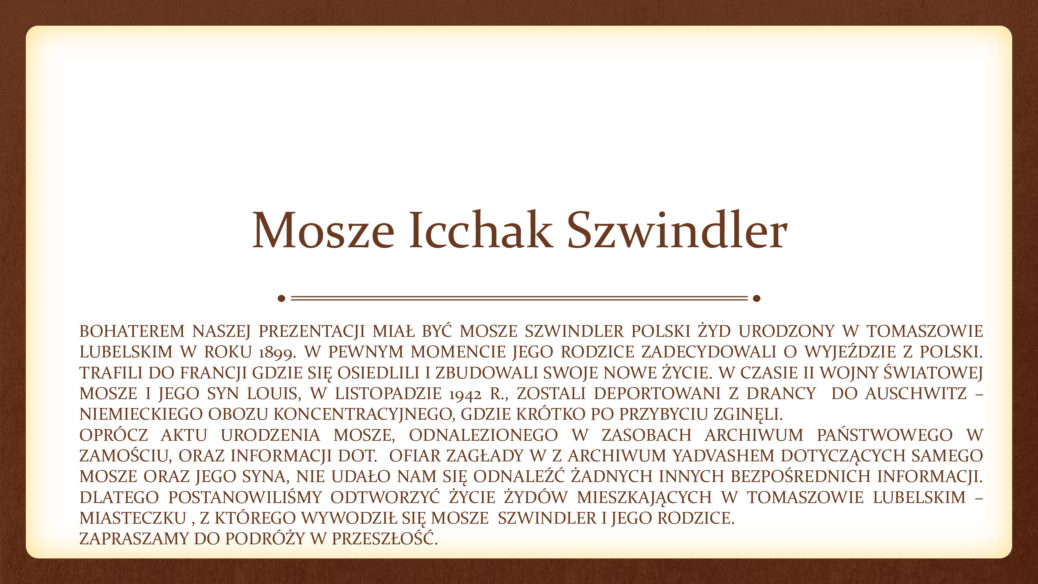 This biography was originally researched and produced by class 1c of the “European Union” no. 1 non-state general education high school in Zamość, Poland, under the supervision of the class teacher, Agneszka Jaczinska.

These students, however, had no means of accessing the French archives. Another class therefore took over the project and enhanced the biography with the additional information found in these records.

The original study is detailed below, followed by the additional work carried out by a class 3e 1, a group of 9th grade students from the Jean Monnet school of Gruchet-le-Valasse, near Le Havre in the Seine-Maritime department of France, under the supervision of their French teacher, Ms. Jumelin and their history teacher, Ms. Simon. 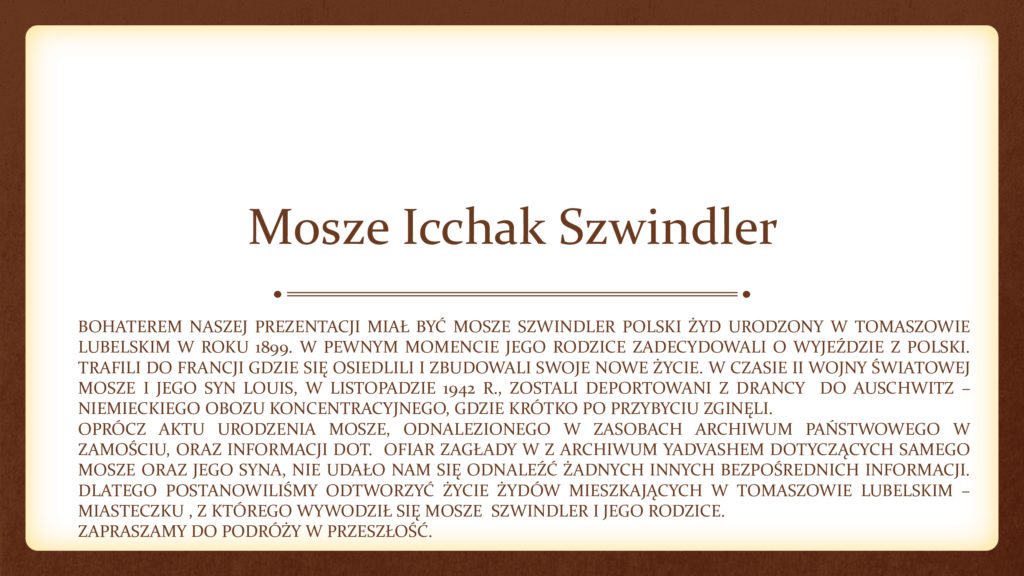 The main character of our presentation was to be Moshe Szwindler, a Polish Jew born in Tomaszów Lubelski in 1899. At some point in their lives, his parents decided to leave Poland for France, where they settled and built a new life. During World War II, in November 1942, Moshe and his son Louis were taken to Drancy internment camp and then deported to Auschwitz – a German concentration camp, where they died shortly after their arrival.

Other than Moshe’s birth certificate, found in the Polish National Archives in Zamość, and one record about the fate of the Shoah victims from the archives of the Yad Vashem Institute, which includes some information about Moshe and his son, we were unable to find any further information. We therefore decided to reconstruct the lives of some Jewish people from Tomaszów Lubelski, the hometown of Moshe Szwindler and his parents.

We would like to invite you to join us on this journey into the past.

WE ARE SEEKING A FRENCH TRANSLATION OF THIS DOCUMENT 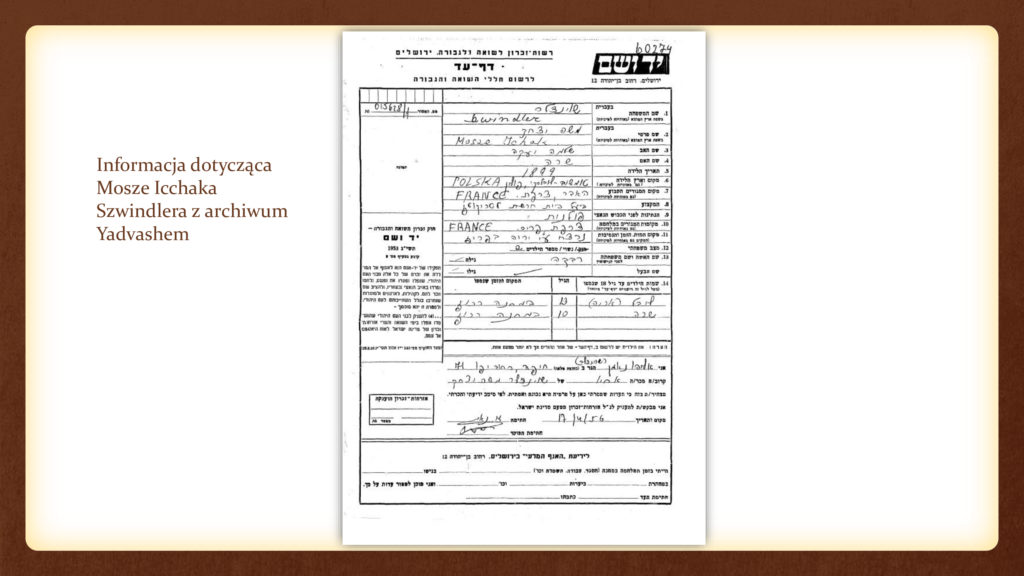 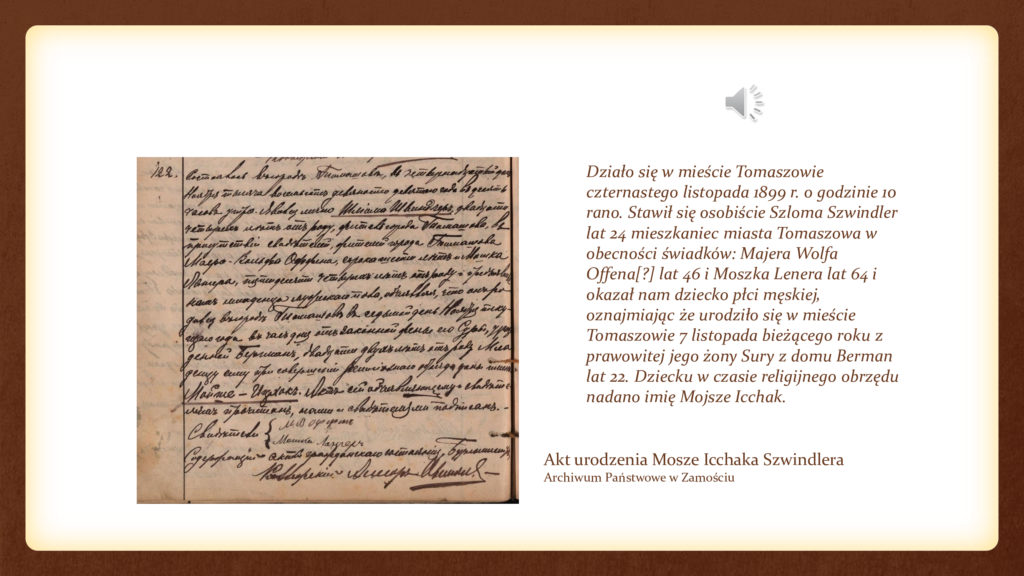 On November 14, 1899, at 10 o’clock in the morning, in the city of Tomaszów, Shlomo Szwindler, 24 years old, a resident of the city, came in person in the presence of the witnesses: Mayer Wolf Offen[?], 46 years old, and Moshek Lener, 64 years old, and presented to us a male child, declaring that he was born in the city of Tomaszów on November 7 this year, to his lawful wife Sura, née Berman, 22 years old. During a religious ritual the child was given the name of Moyshe Itzhak. 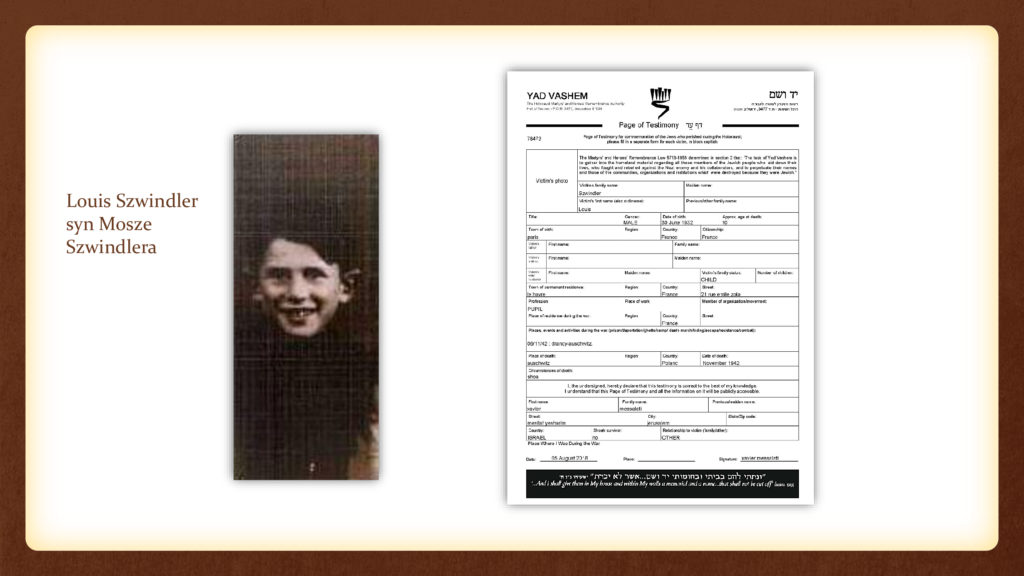 Biography compiled by the class from Gruchet-le-Valasse, near Le Havre in the Seine-Maritime department of France

The 9th grade students of class 3e 1 studied the records about the Szwindler family that provided by the various archives services. We asked if we could work on this deportee as part of the Convoy 77 project since he lived in Le Havre, about twenty miles from our school. The students studied the source documents and various Internet sites in order to try to reconstruct Moïse’s life. They became aware of just how close history is, in both time and space, and of the difficulties in searching for source documents as well as in analyzing them. Cross-referencing sources is an essential method in this biographical process: the spelling of names and places can vary, for example.

An 11th grade class from Poland also worked on Moïse’s biography, in an attempt to reconstruct his family’s history in Poland.

This biography is the result of 8 months’ work, supervised by Ms. Verleine Jumelin in French class and Ms. Hélène Simon in History. The students put their hearts and souls into their work in order to give “life” to this family and to bring it out of the oblivion into which the Shoah sadly plunged it.

Moïse was born on November 7, 1899 in Tomeszow, Poland. His parents were Shlomo Szwindler and Sara Bergmann. Both Shlomo and Sara were born in Fomarszow, Poland in 1874.

Moses arrived in France on January 10, 1923. He had not been in France before that date and did not want to go to the United States. He stayed in Paris for a few months, before moving to Le Havre on December 16, 1923. He was employed as a cook from April 16, 1924, earning 16 francs a day. He sailed the seas as a waiter working for a shipping company, the Compagnie des Chargeurs Réunis, and then he worked as a varnisher for the Maison Annès on rue Louis Philippe in Le Havre. 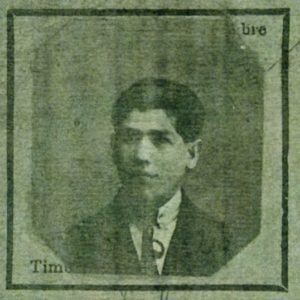 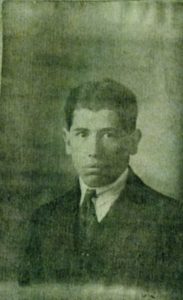 Photo from Moïse’s application for an identity card, made on January 2, 1925 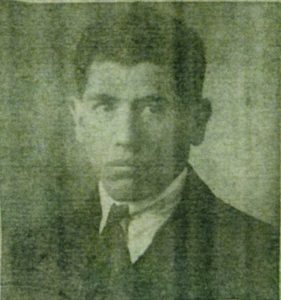 Moïse Szwindler, photo from his identity card issued on January 8, 1926 by the prefecture of the Seine Inférieure department of France

In 1925, Moïse gave the French administration the details of a foreigner, Rosa Sarla, in Lodz, Poland. An investigation carried out into Moïse reveals that he had no income on March 14, 1928. He applied for an identity card. Moïse was thus considered to be a stateless person, and a knitter by trade.

Moïse was granted an identity card, n° 1 051 948, issued on January 8, 1926, valid until December 31, 1928. He had a certificate of employment, for a permanent contract, from a Mr. Laguerre Just Laurent, the manager of the hotel of the Compagnie Transatlantique at 34, rue de Phaslbourg in Le Havre. Moïse, then 26 years old, was living at 63, rue du lycée in Le Havre. 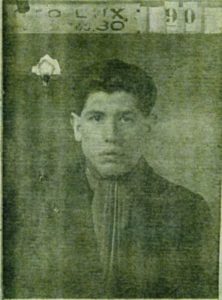 The photo of Moïse Szwindler on his identity card application, January 2, 1927

On June 23, 1928, Moïse arrived in Bréauté, where he stayed until May 7, 1929. He lived in the hamlet of Hauteville and worked as a market gardener for Mr. Maximin Boucher, on a permanent contract. He eventually left Bréauté to go back to Le Havre.

On October 19, 1929, the town hall of Bréauté received his new identity card n°1051948, (the acknowledgement of his applicaiton having been issued in Bréauté on June 5, 1929) and handed it over to him on October 24, 1929. On this new ID card, the occupation “agricultural employee” was crossed out. He was by then living at 4, place des Halles Centrales in Le Havre and was working as a varnisher. The employer’s certificate was provided by François Auguste: Moïse was employed as a varnisher by the Auguste Osmost company at 19, rue Michel Yvon in Le Havre, where he earned 37 francs a day. He started this job on June 28, 1929. 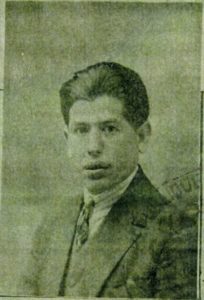 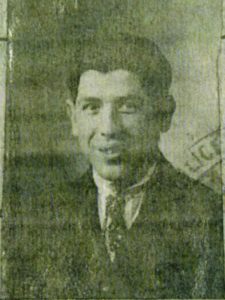 The photo of Moïse Szwindler on his identity card application, January 22, 1930

During his time in Le Havre, Moses met a young Russian refugee, Riwa (or Riva, the spelling differs between documents). 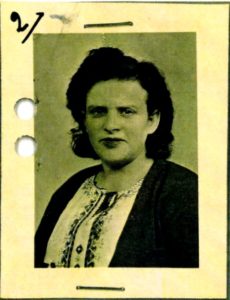 Riva was born in Russia on August 15, 1905 or September 16, 1906 (again, the date varies according to the documents). Her parents were Chernigov de Hirsh and Chaya Lapin.

She arrived in Le Havre in 1923, having left from Riga, together with her mother and brothers. From there, they intended to leave for New York, where the father lived. However, a recent change in American immigration law, which introduced a quota system, meant that they were unable to go. The family was then granted permission to stay in Le Havre until they were admitted to the United States.

During Riva’s stay in Le Havre, from 1923 to 1928, during which time she was monitored by the special commissioner, no negative observations were made about her.

Riva embarked for the United States on July 11, 1928. Before she left, she got engaged to Moïse. Riva returned to Le Havre on October 29, 1929 on a two-month visa issued by the French Consulate.

According to the records found in Riva’s file, Moïse Icek Swindler was born on November 7, 1899 in Tomasow. His parents were Szloma and Sara Bergmann. He arrived in France in 1923, lived in Paris for a few months and then, on December 16, 1923, moved to Le Havre. He worked as a waiter, sailing on the ships of the Compagnie des Chargeurs Réunis. He then worked a varnisher at the Maison Annès on rue Louis Philippe in Le Havre. He was in the process of being naturalized as a French He had good references: sober, hard-working and not involved in politics. He held an identity card, N°1.361.004, issued on January 7, 1930 by the prefecture of the Seine Inférieure department. He lived at 14, place des Halles in Le Havre.

The marriage banns were published, and the wedding was to take place as soon as all the necessary documents were in place. 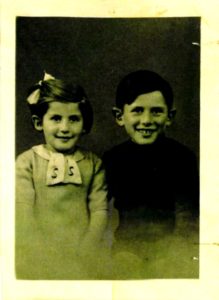 Sarah and Louis Szwindler. Source: Ministry of Veterans Affairs and Victims of War

Moïse and Riwa went on to have two children.

Sarah was born on June 22, 1935 in Le Havre. When she was born, her parents were living at 15 rue Guillemard, in Le Havre, in their landlord’s house, where he rented out furnished rooms and apartments. 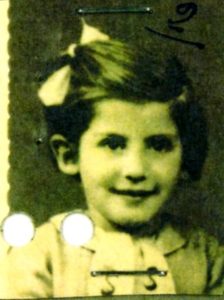 The children were arrested on October 10, 1942 at Saint-Martin du Manoir. They passed through Rouen and were then interned in Drancy camp. They both died in Auschwitz on November 11, 1942, as soon as they arrived on Convoy 42. They were both French citizens.

A certificate attesting to the deportation of the children was delivered to a Mrs. Fedorowsky, who lived, at 35 rue de Turenne, on August 28, 1945.

The photo of the children is available on the Shoah Memorial website. It was donated by Georges Fedorowsky, who describes himself as a distant cousin.

Riva was arrested on July 1, 1942 during the Vel d’Hiv roundup and was then interned in Pithiviers camp, where she arrived on July 19, 1942. She died in Auschwitz on August 7, 1942, having been deported on Convoy 14. She was deemed to be a stateless person.

Moïse was considered to be a so-called “racial deportee”, which is to say that he was deported on grounds of race, because he was a Jew. He was arrested in Le Havre, at 56, rue Coqueline Aîné, around June 1944 (or April 24, 1944 depending on the source), under a false name: Léon Vautier. He was interned in Fresnes prison, then transferred to Drancy camp on July 27, 1944, where he was given the registration number 26018. He was deported on Convoy 77, which left Drancy on July 31, 1944. He probably died on August 5, 1944 in Auschwitz, soon after the convoy arrived.

The students and their teachers would like to thank the various archives services for their patience, their responses and their help during the research.