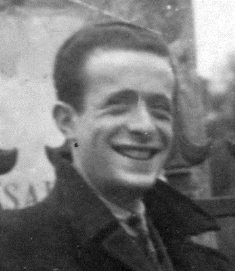 Henri Netter was born on September 19, 1924 at his parents’ home at n° 7 rue Kant in Strasbourg (Bas-Rhin department). His father Alphonse was a retailer of sundry household goods, and his mother Pauline née WOLFF was a housewife. He was an unmarried hairdresser residing at n° 49 rue du Vieux-Marché-aux-Vins in Strasbourg.

He left Strasbourg to seek refuge in Périgueux (Dordogne department), where he lived on the rue Éguillerie. According to a letter from the Prefect of the Dordogne, Henri NETTER “was employed in the afore-mentioned city as a hairdresser by M. BERNARD on the rue Limojeanne until 1943, when he was called up for forced labor and sent to Cherbourg”.

On July 15, 1944 he was transferred from Vichy to Drancy, where he was attributed I.D. n° 25133, according to his Drancy data sheet (AN F/9/5718). Transferred at the same time was Pierre LÉVY, also born in Strasbourg (Bas-Rhin) in 1924, also resident on the rue du Vieux-Marché-aux-Vins, and also a refugee in Périgueux. Everything suggests that these two young men were arrested together in the Vichy area. According to the family he was arrested in Vichy (Allier department), most likely on July 14th, and interned in that city.

He was posthumously allotted Political Deportee card n° 1.167.0477 by a decision of the Ministry of War Veterans and Victims, dated September 10, 1053.

His uncle, Isidore NETTER, born on October 29 [ année manquante ?] in Marmoutier, was deported on September 2, 1943 from Paris-Bobigny to Auschwitz, Poland in convoy n° 59. He died there in February, 1944 according to the Marmoutier public records.

– Klarsfeld, Serge: List of the transfers from Fichy to Drancy on July 15,