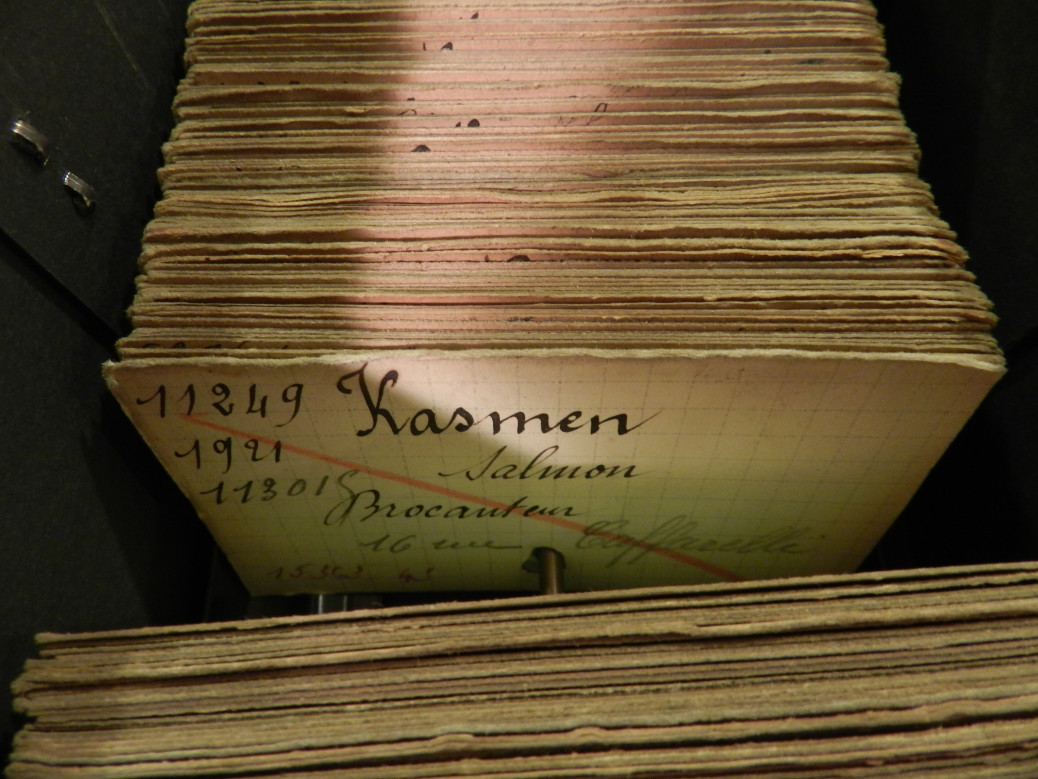 To escape the oppression and pogroms of tsarist Russia and the disastrous economic situation (of which people of the Jewish faith were the first victims), many families decided to flee their countries in Central or Eastern Europe and go to live elsewhere. But where should they go? In many cases, it was the presence of a family member already there that would determine where the family would settle. Sometimes it was simply a matter of having an affinity for the host country and a vague idea of what it might be like. Many people of the Jewish faith went to try their luck in the new world, in America. Others chose Europe and in particular France, which, for some, represented a country of political, economic and cultural opportunity.

This was the case for the Kasmen family, which, like thousands of other families [1], chose to settle in the French capital. In 1897, Salomon Kasmen (born at Lejevesk or Lipovetsk on June 15, 1875  (editor’s note, possibly Konotop, in what is currently Ukraine) arrived from Russia with his parents, Charles (editor’s note, possibly Chays or Chaïm) Kasmen and Sarah Elkouke, when he was 22 years old. The family settled in the 18th district, at 39, rue du Poteau, near Jules Joffrin subway station and the local town hall. At the end of the 19th century, this district, located between Thiers’ fortified wall and the older Fermiers Généraux wall, was a popular area where many Jewish immigrants lived.

Salomon’s father was a tailor by profession, making clothes for private individuals, and his mother was a homemaker. Salomon, like his father, was a tailor.

The year that he arrived in France, Salomon met Félicie David and they became a couple. Félicie was born in Metz, in Lorraine, on May 21, 1873. Her mother, Rosalie Lazard, was deceased and her father, Léon David, worked as a fabric merchant on the hill of Montmartre.

On July 13, 1897, the couple were married at the town hall of the 11th district. They moved to 53, rue du Poteau, in the same street as Salomon’s parents. They only stayed in this accommodation for a few months because Félicie became pregnant, so they had to find a bigger place to accommodate their first child. They moved to 66, rue du Ruisseau, which was not far away and still in the 18th district.

A year later, Félicie gave birth to their first child, a girl they called Fanny. She was born on May 12, 1898. On December 19, 1898, when the child was seven months old, she died at her parents’ home. A year later, on December 9, 1899, their second daughter Esther was born. Salomon was 24 years old and Félicie 26. In 1904, five years later, on June 5, 1904, the couple welcomed their third daughter, Ida, into the family. At that time, Salomon was a clothing dealer. Félicie did not work outside the home. Two years later, on January 25, 1906, their fourth daughter, Berthe, was born.

On January 26, 1908 Salomon opened his business at 16, rue Caffarelli in the 3rd district. A reference in the commercial register states that he was a “second-hand dealer”. The commercial building did not belong to him but was rented from a Mr. Feldblum who lived in Saint-Mandé, at 68, avenue Alphand. Salomon used these premises as a storage space and worked in a thrift store in the Carreau du Temple gallery. To supplement his income, he sublet some of the storage space to his colleagues from the Carreau.

It should be noted that the fabric trade was a speciality of Jewish workers in the capital at the beginning of the 20th century. According to a 1910 Yiddish guide, some 8,860 Jews were employed in the Parisian garment industry that year, representing 29.3% of all Jewish workers. Cap manufacture was considered a speciality of Russian Jews at the time. It is estimated that 70% of garment workers in the inter-war period were Jews from Eastern Europe.

In Salomon Kasmen’s file, compiled by the General Commission for Jewish Affairs, there is a copy of a letterhead of a company in the Carreau du Temple. On it the words “hat manufacturing” are mentioned. This document would corroborate the fact that Salomon, like many of his Russian Jewish colleagues, specialized in the manufacture of headwear.

On June 2, 1908, the young man applied for naturalization for himself and his three daughters (Esther, Ida and Berthe). He obtained it on August 7, two months later, for the following reasons:

– He had been living and working in France for 11 years.

– He was married to a woman from the province of Alsace.

– His three children were born in France.

On October 19, 1922, one of the Kasmen’s daughters, Esther, who was 23 years old, was married in Paris. From the records of this event we learn that Salomon and Félicie were living at 10, rue Oberkampf. They had moved, therefore, closer to the husband’s business.

In 1927, Salomon and Félicie moved in to the rear of their commercial premises, which were used as warehouses, at 16, rue Caffarelli. They lived in two rooms: “a kitchen and living room”. This would have been for the simple reason that the couple were not making enough money to rent an apartment in addition to their store. According to all available documentation, Félicie did not work outside the home and Salomon’s salary alone would not have been sufficient.

In the 1940s, the General Commission for Jewish Affairs opened an investigation into Salomon Kasmen and his business. In accordance with the German ordinances of 30 May and 18 October 1940, a Mr B. was appointed as the manager of the Kasmens’ business. In view of the restrictions imposed by the Vichy regime, Mr. Kasmen’s turnover was reduced to one-third of what it had been before. It went from 13,535 francs in 1940 to 4,460 francs in 1941.

Salomon had to stop working on 30 March 1941. Two months later, on May 20, 1941, he was struck off the commercial register. His merchandise was sold off. He continued to live with his wife in the back of his store even though he was no longer in business.

On July 14, 1944, he was stopped and arrested on racial grounds (because he was an Israelite) while “walking in the street”.

On July 17, Salomon arrived in the Drancy internment camp. Two weeks later, on 31 July 1944, he was deported to Auschwitz-Birkenau in convoy 77. Probably considered too old to work in the camps, Salomon Kasmen is likely to have been executed immediately after his arrival, given that his death certificate was dated 5 August 1944. He was 69 years old.

Félicie Kasmen, his wife, stayed on in the apartment on Cafarelli Street for a few more years. In 1946 she was still living at the back of the store according to a population census carried out by the Paris City authorities. Félicie ended her days in Montmorency, in the Val d’Oise department, where she died on November 15, 1968.

Documents that enabled me to compile the biography (sorry, I have not listed all of the sources but most of them can be found easily online in the Paris City Hall civil registers. The most difficult are sourced: AJ38 and naturalization records):

Archives from the City of Paris:

+ I found some information about his parents: they had two children while in Paris, and I also learned that Salomon had two other brothers and sisters that seem to have stayed in Russia.

Archives of the town of Montmorency: ok

Archives of the town of Metz: ok

Archives of the Paris police headquarters: nothing

Archives of the Shoah Memorial: nothing that I did not already know 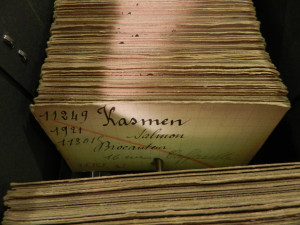