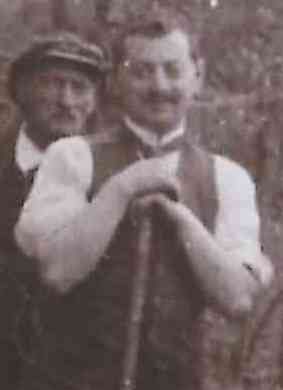 Henri Samuel was born on May 11, 1888 at Weiterswiller in the Alsatian department of the Bas-Rhin. He was the son of Abraham Samuel and Elise née LEHMANN, and he was married to Palmyre née LÉVY.

He was a horse dealer living in Haguenau (Bas Rhin).
Expelled from the Bas-Rhin in June, 1940, he sought refuge with his family in Lapalisse (Allier department), where they lived first on the rue Traversière, and then on the Route Nationale.

They were repertoried as French Jews in Lapalisse under the terms of the French state’s Anti-Semitic Law of June 2, 1941.

(Source for the above document: Departmental archives of the Allier department 756 W 1)

He was listed by the French state in 1943 as a French Jew.

(Source for the document below: Departmental archives of the Allier department 996 W 778 W 112)

He was arrested with his wife in the roundup by the German police on June 30, 1944 and interned in the Mal-Coiffée German military prison in Moulins (Allier department).

Note: His brother-in-law, Paul LÉVY, his sister-in-law Elvire, and his niece Jacqueline were also arrested in the same roundup.

“Died in deportation” according to the decree of the State Secretariat for War Veterans dated February 24, 1998, published in the Journal Officiel n° 115 of May 19, 1998.