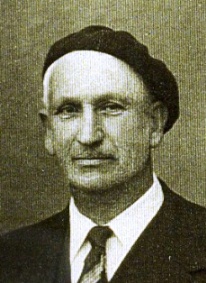 Translated from the biography established by the AFMD (Friends of the Foundation for the Memory of the Deportation of the Allier Department): (Source for the above photos: Family archives)

Léopold Schwartz was born on March 1, 1882 at Westhoffen in the Alsatian department of the Bas-Rhin). His father Séligmann was a butcher, and his mother Fanny, née WELSH was a housewife.
On October 28, 1919 he married Reine née LÉVY at Odratzheim (Bas-Rhin).

Reine was born on September 5, 1898 at Odratzheim. Her father Jacques was a peddler and her mother Pauline née ISAAC was a housewife.

They had two daughters – Raymonde, born in 1920, and Odette, born in 1927.
As a retired policeman he resided at n° 6 Boulevard de Nancy in Strasbourg (Bas-Rhin).

In the adjacent photo he is shown receiving the Médaille Militaire in Strasbourg. Léopold SCHWARTZ, dressed in civilian clothes, is first on the right.

Expelled from Alsace, he and his family sought refuge on the rue du 11 novembre in Lapalisse (Allier department) in June, 1940.

The family was inventoried as French Jews in Lapalisse under the terms of the French state’s Anti-Semitic Law of June 1, 1941.

The SCHWARTZ family at Lapalisse in April, 1944

Registration of the SCHWARTZ family by the French state in 1943.

Léopold and Reine were arrested in the roundup in Lapalisse on June 30, 1944 and interned in the Mal-Coiffée German military prison at Moulins (Allier department), whence they were transferred on July 15, 1944 to Drancy. Léopold received I.D. N° 25164.

The document above is extracted from the list of the deportees in convoy 77. Source: Mémorial de la Shoah C 77_54

Léopold and Reine SCHWARTZ died on August 5, 1944 at Auschwitz, Poland according to the Lapalisse public records office and the Journal Officiel N° 1 of January 2, 2001.

“Died in deportation”, decreed by the Veterans Administration of the Defense Ministry on September 6, 2000, published in the Journal Officiel n° 1 of January 2, 2001.

Arrest by the Germans

How their daughters Raymonde and Odette escaped the roundup

On June 30, 1944 Lapalisse was taken over by the German army; my father, who was on duty guarding a bridge, had his papers checked by the Germans and was arrested because his I.D. card was stamped “Jew”.

Around 8 o’clock in the morning our landlord came upstairs to our apartment to let us know there was a roundup underway.

We were surprised that our father had not come to warn us; I went to the bridge over the Besbre, and one of my classmates who lived in a house overlooking the bridge called out to tell me my father had been arrested.

I returned home to tell my mother, and she got some things together for me to take to my father!

When my classmate, Yvette Mazzia, saw me coming back, she asked me where I was going. I told her what I was doing and she said, “You’re crazy. I’ll take them to him”. She was the first person to save my life.

By coincidence 59 years after these events I came across this classmate living in Texas in the U.S. I went to see her. Our reunion was very moving. I then found out that she had had trouble with the Germans, who wanted to know how she was related to my father. It was the mayor at the time who intervened to get her quickly released.

When I got home I moved everything I thought was important to the mezzanine of the house where we lived, while my mother in her great naïveté took steps to find out what was going on.

When I finished moving things I went to our neighbors’, the Charon family, rue du 11 novembre.

When my mother came back I asked our neighbors to get her to join me. After a little conversation at their place she insisted on going back home. I tried to talk her out of it. As for me, I refused to go back up to our flat.

She had scarcely climbed the stairs that led up to our flat when the Germans arrived with my father in the car to force him to go up to our place.

The German net closed around her.

As our neighbors were afraid the neighboring houses would be searched to look for me, I went out under the nose of the Germans to their garden cottage at the back of  a little dead-end street on the Place du Marché.

A lady, Madame Laurent, I think, seeing me pass by, had me come into her house. She knew what had happened to my father.

In the afternoon our landlady, Madame Rollet-Roche, recuperated a false I.D. card for me that was hidden in our flat.

That evening the Daniels, refugee friends from Alsace-Lorraine, came to get me; they took me cross-country by way of a farm to their home, without letting their young children know I was there.

I stayed there two days, after which the Daniels took me by bicycle to the home of the mayor of Saint-Martin-d’Estreaux.

I spent a day and a night with that family.

Very early the next day the mayor took me to the station and put me on a train in which Marie Daniel was waiting and which went from Lapalisse to l’Arbresle, where my sister had for two years been living under a false identity as an orderly and secretary to Sister Superior Marie-Alice, who directed the hospital.

It was a terrible blow for her to learn that our parents had been taken by the Germans. It had serious repercussions on her health for a long time afterwards.

My sister Raymonde took me under her wing. She and Sister Marie-Alice found me a boarding house in Savigny, 5 kilometers (3 miles) from l’Arbresle, where some brave nuns who were aware of what was happening took me in and where I was to remain until September, 1944 after the Allies landed on the beaches of the Mediterranean.

I saw the first liberating soldiers arrive on August 25, 1944, an immense joy in our sadness.

Two weeks after the liberation of Paris we returned to Lapalisse, packed the things we wanted to take with us, and left in the first uncovered truck that was going to Paris, where we were reunited with our uncles and our aunts, who welcomed us with open arms.

A chain of at least 10 people made it possible for me to escape the Germans and the extermination camps.