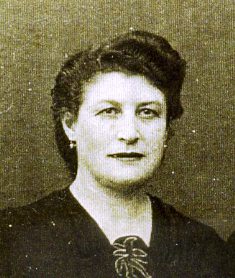 Reine Lévy Schwartz was born on September 5, 1898 at Odratzheim in the Alsatian department of the Bas-Rhin. She was the daughter of Jacques LÉVY and Pauline née ISAAC. She wed Léopold SCHWARTZ on October 28, 1919 at Odratzheim (Bas-Rhin), and they had two daughters, Raymonde and Odette.  They lived at n° 6 Boulevard de Nancy in Strasbourg (Bas-Rhin).

They took refuge in Lapalisse (Allier department) in June 1940, living on the rue du 11 novembre.

They were repertoried as French Jews in Lapalisse under the terms of the French state’s Anti-Semitic Law of June 2, 1941.

(Source for the document below: Departmental archives of the Allier department 756 W 1)

Léopold and Reine were arrested in the roundup in Lapalisse on June 30, 1944 and interned in the Mal-Coiffée German military prison in Moulins (Allier department), whence they were transferred on July 15, 1944 to Drancy. Léopold was attributed I.D. n° 25164 and Reine n° 25165.

She died on August 5, 1944 at Auschwitz, Poland according to the Odratzheim and Lapalisse public records and the Journal Officiel n° 1 of January 2, 2001.

“Died in deportation” according to the decree of the State Defense Secretariat in charge of Veterans Affairs dated September 6, 2000, published in the Journal Officiel n° 1 of January 2, 2001.

You can read a more complete biography under SCHWARTZ Léopold.