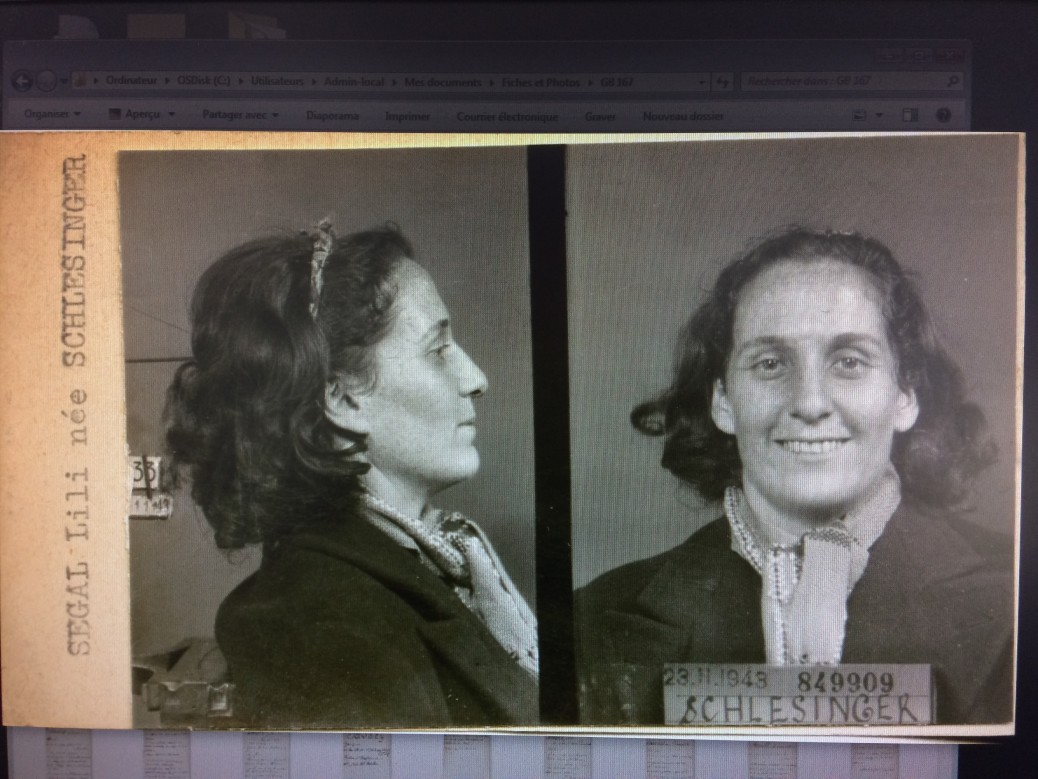 Lilli Segal was born on June 7, 1913 in Berlin as Lilli Schlesinger and she died in 1999 in Berlin. She was an agronomist and biologist, a political activist and a member of the Résistance.

On the picture shown, taken as she was in custody, at the Prefecture de Police de Paris in November 1943, she smiles, challenging the keeper. 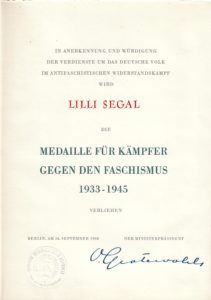 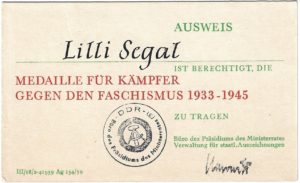 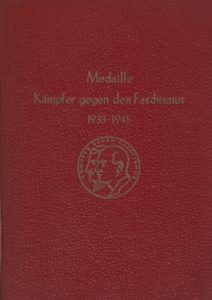 Lilli Segal was the third child of Dr. Arthur Schlesinger, a medical doctor, and his first wife Fanja Zoller, a dentist and nurse from Romania. She was born in Berlin on June 7, 1913. Lilli went to school in Berlin and at Lake Constance and studied law from 1931, but switched to agriculture in 1932.

When Lilli was 9, her mother died of pneumonia as a result of severe diabetes. On April 1, 1933, the day of the boycott of Jewish shops and enterprises in Germany, her father committed suicide.

His second wife, Edith Albrecht, threatened to denounce Lilli to the police as a communist, to make her leave the shared residence. Because of the tightening restrictions for Jews in Germany, Lilli moved to France in 1933 and studied at the Toulouse University of Agriculture.

During her stay in Toulouse she met the student Jakob Segal, a Lithuanian national, who was a member of the German Communist Party (KPD). He had immigrated to France because of his involvement in the communist ‘Red Student Union’. They married on May 25, 1935 and Lilli was given Lithuanian citizenship by virtue of the marriage, which made her a citizen of the Soviet Union from 1940.

Due to her non-German nationality, Lilli Segal was able to travel to Germany without any difficulties after 1935. During these trips she took on several missions for the KPD without being a member of the party. These were among other things the housing of endangered comrades, the production and distribution of leaflets, and courier activities.  In addition, she remained in contact with a group of Bavarian Catholic officers who were opponents of the Hitler regime. They provided her with money for political work.

Until the outbreak of war, Lilli Segal worked in a laboratory in Paris from 1937. She joined the French Communist Party, with which she was regularly involved until the beginning of the war. Because they feared that she was under surveillance by the Gestapo, the French comrades broke off the connection with her.

When Germany occupied France, she left Paris and lived in Mende. In the summer of 1943 party leaders decided to transfer Lilli Segal to the same working group as her husband, because both had lived together for a long time and worked in the same office.

From 1943 until her arrest she worked as a so-called liaison agent for her husband, who worked at the technical headquarters of a party section which dealt with transporting materials, as well as the contact management of liaisons with the headquarters.

The persecution of party official Paul Grasse led the police to their office in the summer of 1943. With the arrest of a number of German and Austrian party comrades on November 23rd Paul Grasse also disappeared.

Lilli Segal was also questioned by the French police (see picture above) at the Prefecture de Police. She was not cooperative and was arrested as a result. After a month, she was handed over by the French police to the German run jail of Fresnes., where she remained until the end of June 1944.

At the end of June, she was taken t Drancy, and after a month, on 31 July 1944, Lilli Segal was deported to Auschwitz in Convoi 77. In the train, she made contact with two Austrian comrades; one of them was Anni Sussmann, with whom she was transferred in November 1944 to a Labour unit at Kratzau in the Sudetenland. (1)

On November 21, 1944 Lilli Segal fled their unit together with Anni Sussmann. They hid in a forest and moved on after nightfall. They met French prisoners of war near the town of Zittau, who hid them on a farm. With the help of these prisoners they reached Dresden. There the employees of her grandmother and some Protestant friends helped them further. They were given clothes and money and made their way through all of southern Germany to Radolfzell on Lake Constance, where they crossed the Swiss border on foot on December 3, 1944. Lilli Segal sent a message from there to her husband, Jakob Segal. She was repatriated to France in March 1945 together with Anni Sussmann. (1)

After returning to France, Lilli Segal continued working for the French Communist Party until 1947. (5) Since it became prohibited for Soviet citizens to work for a political party abroad, she left France together with her husband, Jakob Segal, and they emigrated to the German Democratic Republic. From 1948 she worked in the GDR in various official political organizations, e.g. as an interpreter. (1)

The heritage of her father had been seized by the Nazis upon his death, and Lilli Segal tried to get it back from the reparations offices that had been created in the GDR. The heritage consisted of several plots of land as well as shares and securities.

However, her father’s second wife, Edith Albrecht, had been declared sole heiress, since Lilli and two other siblings had been living abroad at the time of her father’s death. When Edith Albrecht tried to sell a plot of land after Lilli Segal had moved to the GDR, a lawsuit over the heritage of Dr. Arthur Schlesinger ensued.

It turned out that Mrs Albrecht was not allowed to sell the property because she did not meet the requirements of the refund committee orequirements. She did not belong to the category of racially persecuted persons, and since political persecution was not proven either, she could not sell the plot. (5, 10, 11)

This was followed by a restitution conflict on the part of Lilli Segal regarding her father’s heritage. The negotiations concerned the restitution of land, shares and securities. Ultimately, the legacy was split among Dr. Arthur Schlesinger’s children and his wife, Mrs Albrecht. Lilli Segal received the plot at the Berlin address Southwest Rail Road 10 and the assignment of war damages. (5, 10, 11)

From 1956 Lilli Segal worked as a biologist at Humboldt University in Berlin. (1)

From then on the only sources of information are an article in the magazine “Der Spiegel” 1991 (6), reporting on Lilli and Jakob Segals’ lives, and some letters concerning the issuing of a new identity document in the year 1992.(1)

1- Lilli Segal wrote a very instructive book, availabe in English, under the title : From Protest to Resistance.

2- 2- Lilli and Jakob SEGAL were certainly manouvered by the east german and russian secret services to broadcast a fake news about the “creation of AIDS in a US laboratory”. See the  excellent report by Anders JEPPSON from the Lund University, Department for Global Health & Social Medicine, Malmo¨, Sweden
https://journals.sagepub.com/doi/pdf/10.1177/2325957417724203