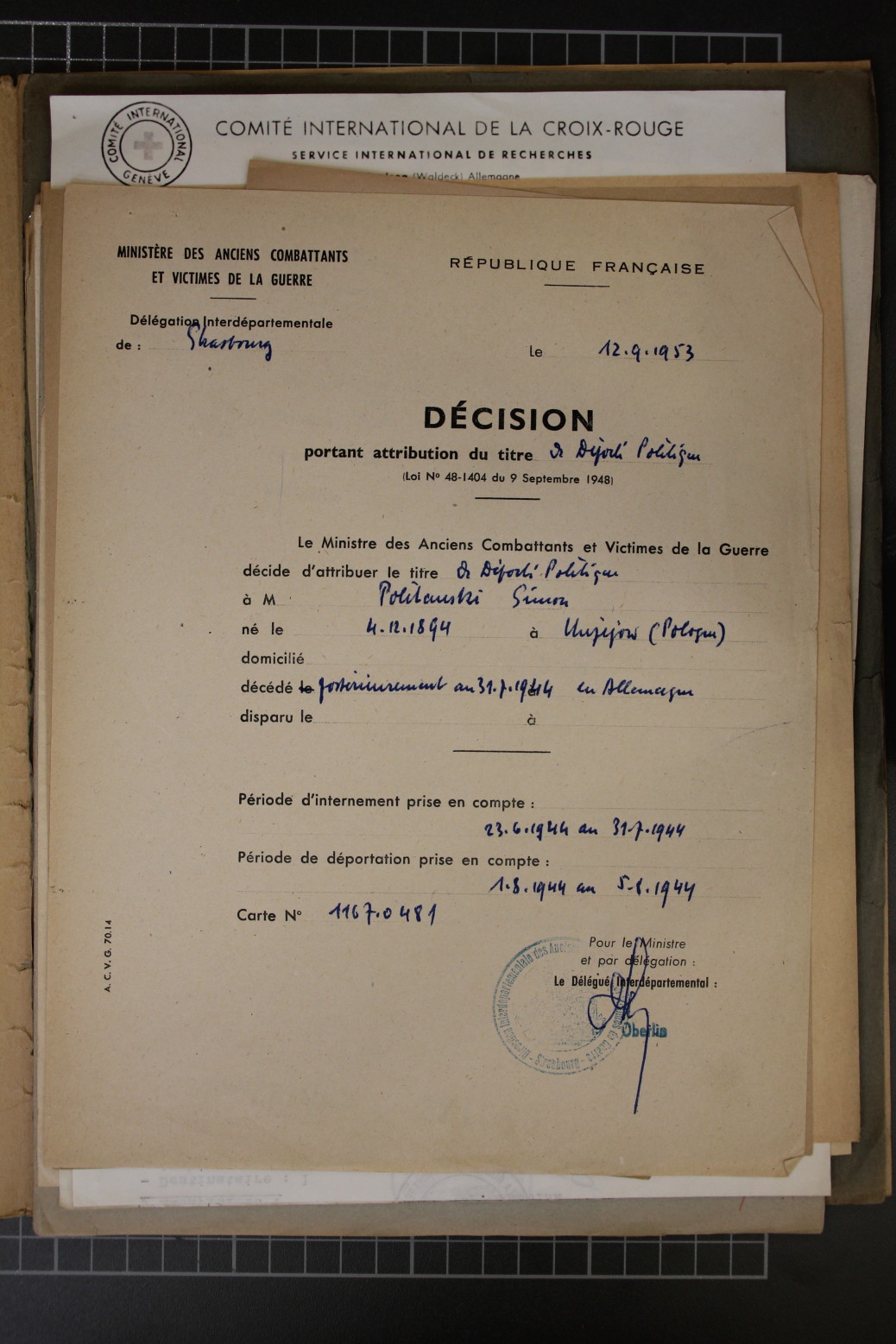 Chia Simon POLITANSKI was born on December 14, 1894 in Muegow, Poland. Other places of birth, such as Onianow, Unejewie, and Unjejow, are also found. The district of Turek is specified. His parents were Schliam Jenkel POLITANSKI and Hanna Riefkin, née FRANKE (deceased in 1929). He lived in France from 1923 on. On February 21, 1929 he married Jeanne HERSCHENBERG, born on June 5, 1899 in Mulhouse. (A marriage contract was established on February 19, 1929 by Paul BIRCKEL, a Mulhouse notary; the marriage certificate is number 111 in the year 1929). She was unemployed at the time. Her parents were Samuel Isaac HERSCHENBERG and Julie ZCKAWICZ. Simon POLITANSKI was a traveling salesman based in Mulhouse; he appears to have worked later as a haberdasher in Clermont-Ferrand. He and his wife had three children:

A residence certificate made out by police chief Charles KLEIN on July 10, 1951 gives the POLITANSKI family’s successive addresses in Mulhouse:

The POLITANSKI family left Mulhouse on September 1, 1939, first living in La Bourboule (from September 7, 1939 to February 2, 1940) and then settling in Clermont-Ferrand. Two dwellings are known for them in this city: n° 71 rue des Hauts de Saint-André (from February 2, 1940) and then at n°4 rue Villiet during 1940. Simon POLITANSKI’s in-laws, Samuel Isaac HERSCHENBERG and his wife, also lived with them.

Simon POLITANSKI was arrested on June 23, 1944 at his home by the Gestapo and imprisoned in the barracks of the 92nd infantry regiment. His wife managed to escape. When she returned to her apartment on August 10th she found that it had been plundered. The loss was estimated at 128,725 francs, including notably the theft of a wallet containing 100,000 francs.

A note issued by the city hall of Clermont-Ferrand on October 4, 1946 and recopied on the 21st, states :

After his arrest in Clermont-Feraand, Simon POLITANSKI was interned in Vichy, then transferred on July 15, 1944 to the camp at Drancy. He was deported on the 31st of the same month to Auschwitz, where he died at the beginning of August.

NOTE: Two uncles are mentioned — Samuel SPITLBERG in Paris’s 18th district and Aron POLITANSKI. The two oldest children immigrated to Buenos Aires, Argentina to be with the latter.