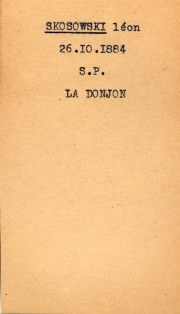 Léon Skosowski was born on October 26, 1884 in Sarreguemines in the Lorraine department of the Moselle.

He was the son of Joseph Skosowski and Léa née GOLDBERG. On April 13, 1885 he wed Dorothée née STEINFELS in Sarreguemines.
He and his wife Dorothée sought safety in the town of le Donjon (Allier Department) on August 10, 1941 and were not repertoried as French Jews.

They took up residence on the rue Gacon Poncet in le Donjon, where they were reunited with Léon’s three sisters — Mina, Nanette and Rachel, all three of whom were widowed.

He was inventoried as a French Jew by the French state in 1943.

(Source for the adjacent document: Departmental archives of the Allier department 996 W 778 W 112)

He was arrested on June 10, 1944 by the Germans and interned in the Mal-Coiffée German military prison in Moulins (Allier department)

(The document below was extracted from the list of convoy n° 77. Source Mémorial de la Shoah C 77_55)

He died on August 5, 1944 at Auschwitz according to the Sarreguemines public records and the Journal Officiel n° 65 of March 18, 2003. 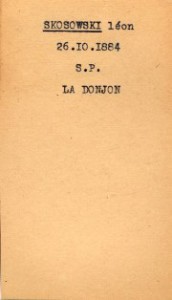