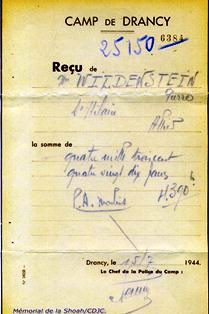 Pierre (Henri) Wildenstein was born on October 29, 1909 at Fegersheim in the Alsatian department of the Bas-Rhin. He was the son of Benoît Wildenstein and Marthe née AMSELLE.

He was a sales representative before 1939.

Taken prisoner of war, he escaped in December, 1941 and joined his widowed mother who was a refugee in Bourbon-l’Archambault (Allier department), where she was living on the rue Archambaudière.

She was listed as a French Jew in Bourbon-l’Archambault under the terms of the French state’s Anti-Semitic Law of June 2, 1941.

His mother was listed as a French Jew by the French state in 1943.

(Source for the above document: Departmental archives of the Allier department 996 W 778 W 112)

Pierre was employed by the Mines de la Grande Paroisse of Saint-Hilaire (Allier department). He resided in Saint-Hilaire.

Around 8:00 p.m. on June 18, 1944 the Militia arrived in Bourbon-l’Archambault and arrested the QUILLIER family, Louis PEROZ, and the policeman Jean DURAND, to be taken to the Hôtel des Sources for interrogation. Pierre WILDENSTEIN happened to be there having a drink with Alex EHRLICH. The only crime of which these two were guilty was being Jewish, and they were also arrested.

The Militia called in the Germans, who transferred the five men to the Mal-Coiffée German military prison in Moulins (Allier department).

He came back to France on June 3rd and returned to live at the Pension Marguerite in Bourbon-l’Archambault. He joined the association “Those of la Mal-Coiffée” and then moved back to Strasbourg at the end of September, where he married Lola WERTHEIMER on May 6, 1947.

– Section of the Archives of the Victims of Contemporary Conflicts 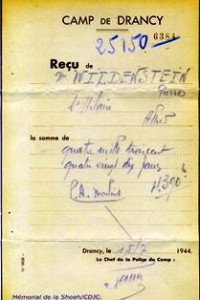 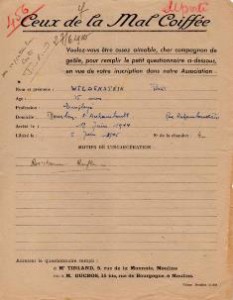