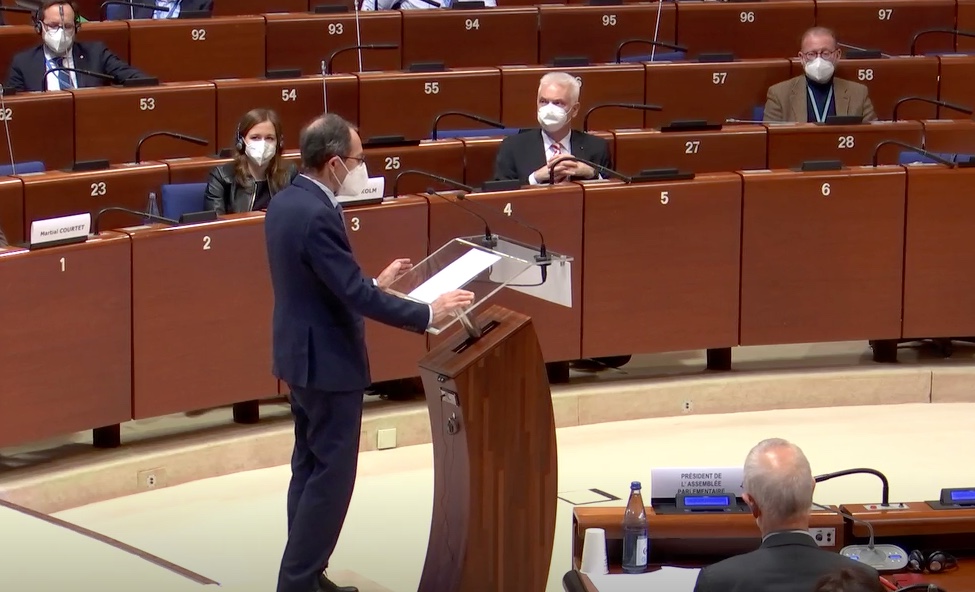 On January 27 of this year, the International Day of Remembrance of the Victims of the Holocaust, the Convoy 77 International Project was featured at the Council of Europe in Strasbourg, during a ceremony marking the 77th anniversary of the liberation of Auschwitz.

“We bear a responsibility not only to the past but also to the future, to ensure that memories are passed on”, said Emmanuel Macron in a recorded address broadcast during the ceremony.

“We owe this effort of remembrance and humanism to the younger generations in particular, so that the memory of the Shoah is never forgotten, so that this atrocious episode in our history is never repeated and so that no young European can remain ignorant of it. If we ignore it, we run the risk of allowing the worst rhetoric to resurface and the evil winds return.” And all this requires practical initiatives, such as that of Georges Mayer and his Convoy 77 association.

“The hope of our entire generation”

The ceremony, which was attended by French Minister of Education Jean-Michel Blanquer and Holocaust survivor Eva Clarke, also paid tribute to the work of the students and teachers who participated in the project. Of the hundreds of biographies written in recent years as part of the Convoy 77 project, eleven were singled out by the Ministry of Education.

Due to the pandemic, the students, who come from all over Europe were unable to attend the event.

“On behalf of us all, I would like to congratulate you on the quality and originality of your work,” said Georges Mayer, the president of Convoy 77, in a speech broadcast live from the Council of Europe.

These students and their teachers “have demonstrated that in the 21st century it is possible to take a different approach to passing on the history of the Holocaust,” he added. “They are living proof of the resolve to continue handing down the legacy of the Shoah and the hope of our entire generation.”