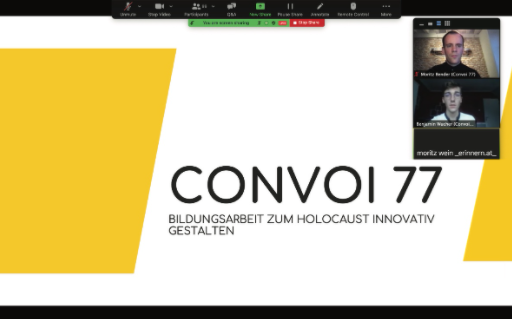 On January 27th, International Holocaust Remembrance Day, Convoi 77 participated in a webinar organised by the “erinnern.at” Institute, part of the Austrian Federal Ministry of Education, dedicated to the contemporary teaching of the Shoah.

After an introduction by the Austrian minister of Education Heinz Faßmann, Sciences-Po students Benjamin Wucher and Moritz Bender, both Convoi 77 contributors, addressed an audience of almost 150 people.

They presented the Convoi 77 project, emphasizing the organisation’s work in Austria. They also attended a round table with members of the Vienna Wiesenthal Institute for Holocaust Studies (VWI) and the erinnern.at Institute on the theme chosen by the UN for this 2021 remembrance day: “Facing the Aftermath: Recovery and Reconstitution after the Holocaust”.

This event allowed Austrian educators and members of the public to share innovative initiatives on how to teach the Shoah.

Convoi 77 thanks erinnern.at director-general Moritz Wein and the whole erinnern.at team for organising this webinar and for their invitation and also thanks the Wiesenthal Institute for participating. 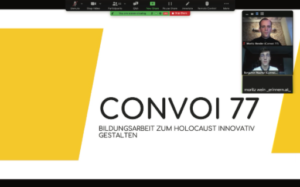