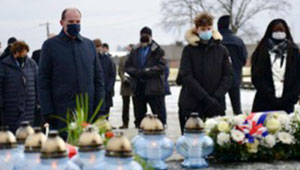 Don’t forget to note in your agenda !

The students in a Master degree at Sciences Po Paris that are involved in Convoi 77 project invite you to attend the conference they organize around the subject :

A sociologist, an historian and a teacher that works with Convoi 77 will interchange ideas about the stakes of commemoration and the future perspectives to reinforce the strength and scope of remembrance. The discussion will be animated and moderated by François Heilbronn, vice-president of the Shoah Memorial. The conference will end with questions asked by the audience.

We will soon give notice of the names of participants, the explored topics and the registration procedures to you.

Don’t hesitate to contact us if you want to participate, give your opinion, your ideas… using the following email adress : equipeconvoi77.sciencespo@gmail.com

Jean Castex’s memorial trip to Auschwitz: the importance of transmission

On January 27, France’s Prime minister Jean Castex flew to Oświęcim (Poland) to attend the commemoration of the 77th anniversary of the liberation of Auschwitz-Birkenau. The delegation, which included Serge Klarsfeld, Haïm Korsia (France’s Chief Rabbi) and Francis Kalifat (President of the French Crif), was welcomed by local authorities and paid a long tribute to the millions of victims of the Holocaust. The Prime minister then took the opportunity to express his concern about the resurgence of revisionist statements in the public debate and denounced “those who falsified history”.

Both Auschwitz survivors, Leon Lewkowicz and Elie Buzyn, had made the trip alongside Jean Castex. After an emotional minute’s silence, they visited the camp’s memorial and museum, before a long discussion with the handful of French high school students that attended the ceremony.

A few hours after the visit, the meeting of education ministers at the Council of Europe and the tribute paid by President Emmanuel Macron to Holocaust survivors further highlighted the importance of remembering the past and fighting Holocaust denial and antisemitism.

On the 27th of January, the European project Convoi 77 brought to light in the parliamentary Assembly of the Council of Europe

International day of Commemoration in the Memory of the Victims of Holocaust is organized each year : Europe as pioneer for the duty of remembrance

In Strasbourg where the Parliamentary Assembly of the Council of Europe (PACE) regularly meets, numerous speeches allowed to arouse again the European willingness to transmit efficiently and sustainably the memory of Holocaust to younger generations. The President of the PACE, the Flemish Rik Daems, invited different actors (head of state, ministers, presidents of organizations, concentration-camp survivors) to speak out. 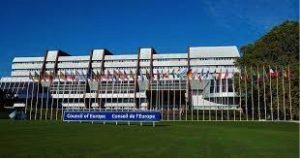 Convoi 77 hailed as an innovating and motivating pedagogical project

Although the ceremony was mainly dedicated to honour the memory of the victims, it was also thought to draw new perspectives in order to reinforce the teaching of Holocaust in European classrooms. The innovating project of Convoi 77 has been evoked as a pioneer of a new dynamic that should be encouraged, by Emmanuel Macron (the French president), and Jean-Michel Blanquer (Minister of Education, Youth and Sport). The enthusiastic mobilization of the teachers and pupils of 19 European countries involved in the Convoi 77 project (which aims at transmitting differently) as much as the multiple benefits they reaped of this experience, appeared as evident in the video they shot for the ceremony. Some pupils described their impression to do an “investigation” when they wrote the biography of a deportee that lived one day in their home town. They also expressed their feeling to “give an identity and a personality back” to the victims and also to come out of oblivion “lost stories that are not told”. On the other side, teachers underlined a “good opportunity” to make their pupils “future wise citizens”, who are more able to master rhetoric and to engage themselves actively in their apprenticeships when they search the material to reconstruct deportees’ lives (archives, oral testimonies…). Eleven class delegations of Convoi 77 should have received directly a price to reward the quality of their work in Strasbourg. But because of the pandemic, they followed the conference through their screens…

A French initiative, the « Observatory of History teaching in Europe » : a promise to reform the transmission of history in 47 European countries

The recent creation of an « Observatory of History teaching in Europe » on a French idea embodies the European determination to underline the fundamental importance of this field of study in order to develop the awareness of youngest European generations about the past of the continent. The creation of this observatory finds its roots in a growing concern, which the Croatian General Secretary of the Council of Europe (Marija Pejčinović Burić) mentioned to the audience : “The Historical consciousness of Holocaust decays ; young people know less this episod of History”. The spokesman of the ADLE (Alliance of Liberals and Democrats for Europe), Jacques Maire, also raised awareness : “15% of French people have anti-Semitic prejudices according to a recent survey”.

The observatory will be there to allow the formation of cooperations between European educational systems, to facilitate exchanges about pedagogical methods and to compare them, and so to “improve the depth and quality” of history teaching through Europe, according to the French minister of education. If young generations doom history to oblivion and ignore lives that have been broken, we would “take the risk to allow the worst discourses to reappear”. These were the words of Emmanuel Macron.

Logo of this new observatory

If you want to learn more about this observatory :

The heartbreaking speeches of survivors

With regard to this fear of history erasure, Simone Veil already raised awareness in October 2002. It was already in the Council of Europe, in front of the ministers of education. Her speech was rebroadcasted at the beginning of the ceremony. Simone Veil warned of the progressive disappearance of eyewitnesses of the Holocaust, which would result in a terrible loss to perpetuate memory. The testimony of Eva Clark, born on the 29th of April in 1945, who spoke from the United-Kingdom, where she now lives, was certainly the most moving moment of this ceremony. Liliane Segre, who survived and now lives in Italy, also delivered an emotional speech, which she concluded with these words : “We never leave Auschwitz”.

Simone Veil during her speech in October 2002

All the participants that were gathered for the ceremony seemed to agree on the pressing need to develop alternative pedagogical projects, such as Convoi 77, to teach Holocaust history. Why ? A German deputee from the Green Party answered to this question when he quoted Bertold Brecht : “The belly is still fertile that gave birth to the vile beast”. A required reminder…

Movies in cinemas in January which tell us about the Holocaust …

Adieu Monsieur Haffmann is adapted from a theatre play. And sadly, it is visible on the screen. But this limit doesn’t prevent the film-maker to create an accomplished movie behind closed door with on the stage three interesting characters, confronted to moral quandaries in front of History. The viewer has access to the delicately drawn characteristics of the characters : the cowardice and sense of inferiority of François, unable to succeed and to conceive, the righteousness of Blanche, and the growing anxiety of Joseph, caught in a trap.

The French newspaper Le Monde recently underlined the limits of the plot that suffered according to the journalists from too many common points with another movie, The last metro, by François Truffaut. We recommend this later to you !

It’s the first time that the famous French actress, Sandrine Kiberlain, directs her own movie. It appears that this movie is refined, touching, completely driven by the talent of the young first role, Rebecca Marder, coming from the French Comedy.

Irène dreams about entering the Conservatory of Theatre. She is swirling and solar. She can’t stop running everywhere and spends her days to rehearse plays, to work in a theatre, to enjoy with friends in a café… At home, she is surrounded by a discreet but caring father, a free and emancipated grandmother and an argumentative brother.

Soon, the viewer understands that the plot takes place in Paris during the Second World War. Irène and the members of her family are Jewish and little by little, they are confronted to danger and privations that are even more foolish. However, Irène seems to see nothing : she is swept away by first loves and concentrated on her passion for theatre and acting.

It’s clearly evident that the film director has been profoundly inspired by the stirring Diary written by Hélène Berr. Indeed, both the movie and the Diary are marked by their common desire to associate lightness of youth and horror of the time.