Switzerland: a street of the town Delémont renamed in honor of a deportee from convoy 77

Home Switzerland: a street of the town Delémont renamed in honor of a deportee from convoy 77 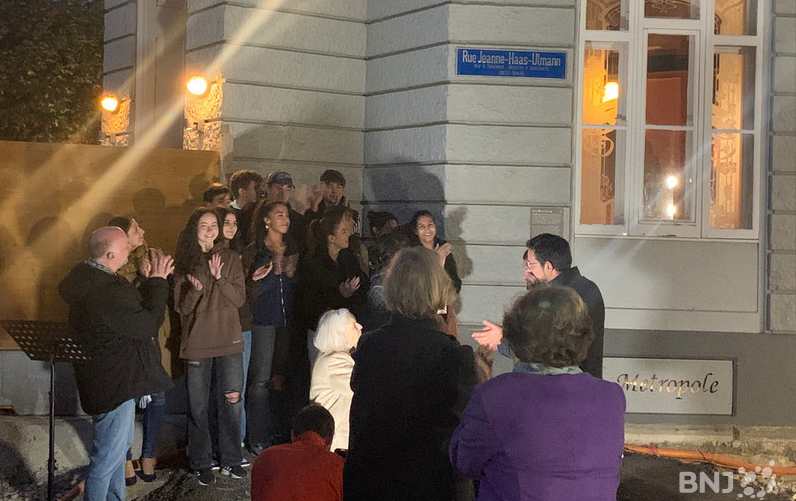 In the town of Delémont, in Switzerland, a street has been renamed after Jeanne Haas-Ulmann, a Jewish woman who was deported in convoy 77, on July 31th, 1944. The inauguration of this new street name, which happened on October 28th, was made possible by the young students of Delémont’s middle school, who worked on the biography of Jeanne Haas-Ulmann as part of the Convoi 77 project. The pupils started the process of renaming the street after her.

“This woman went to the same places as us”, the students wrote. “She saw the same buildings and walked on the same streets as we do. She simply didn’t have the destiny she deserved. She could have led a normal life, if she had been born during another time.”

When she was 65, Jeanne-Hass Ulmann was arrested in Lyon and deported, with her daughter Eliane, to Auschwitz. Naming a street after her is a way of paying tribute to someone who was not “a famous character” but “an ordinary person”, the pupils said. “This woman didn’t change the course of History. She was neither a leader of the resistance, nor a soldier in the army. But she was there, she was living during the war. She lived all those horrible things.”

Georges Mayer, president of Convoi 77, congratulated the students for their excellent work which was accomplished with the help of their professors Julien Tschopp and Marilyn Fazio. “This project helped give another dimension to the work of remembrance”, Georges Mayer said during the inauguration of the street. “To my knowledge, it is the first time a municipality has taken such a step and I would like to warmly thank the mayor of Delémont for this decision.”