Signature of an agreement between the Association of the families and friends of the deportees of Convoy 77, and the Paris Police Prefecture

Home Signature of an agreement between the Association of the families and friends of the deportees of Convoy 77, and the Paris Police Prefecture 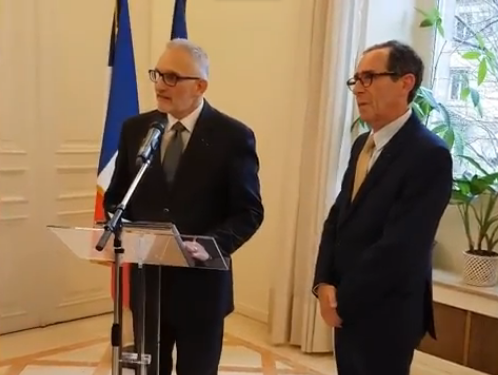 On Monday, March 12, the President of the Convoy 77 Association and the Prefect of the Paris Police signed an agreement warranting very broad and professional access to the Archives of the Paris Police Prefecture, in order to facilitate its action and round out the documentation needed to draw up the biographies of the deportees. This agreement authorizes the association to formally acknowledge these documents on their internet site and in any other eventual publications (in compliance with the rules governing the reproduction of archives).

The signature ceremony took place in the offices of the Prefect of Paris Police, in the presence of numerous prefects and top echelon civil servants, whose presence conferred a symbolically important solemnity on the act. In his speech, some recorded extracts of which are reproduced below, Mr Michel Delpuech, the Prefect of the Paris Police, emphasized this importance.

The ceremony opened with a warm and enthusiastic speech by Mr Jean-Marc Gentil, head of the Police Prefecture’s department for memorial and cultural affairs, who drew up the agreement.

Mr Georges Mayer, president of Convoi 77, then took the floor to present the association and thank those who had made possible the signature of this agreement.

After a reception the Prefect opened his private apartments to show his guests the billiard room where the surrender of the German garrison was signed on August 25, 1944. Mr Gentil supplied a great many fascinating details on that highly important event.

The agreement signed gives those carrying out research within the framework of the Convoy 77 project exceptional access to the Archives of the Paris Prefecture of Police. It springs from the desire of the Convoi 77 Association to facilitate access to the documents in the different archives for the pedagogical teams and their students participating in this memorial and educational project.